SLIPPERY ROCK, Pa. — When people read the byline of a newspaper article or the scrolling credits of a video production, they see names, not skin color. But media coverage is not colorblind because each journalist brings their own background and experiences to the subjective way they choose to tell a story. Zachary Gibson, a Slippery Rock University sophomore communication major from New Castle, recognizes this and the importance of having diversity in a newsroom. Gibson is interning at Trib Total Media in Greensburg and Tarentum as a recipient of one of the Pittsburgh-area news outlet's Scholarship for Diversity in Media.

"We need all perspectives on every news story, and you often can't get all perspectives unless you have diversity," Gibson said. "Putting (people of color in the newsroom) gives all of the eyes to the story and it gives a better chance for the full story to be told."

A perfect example of this occurred during the summer when Gibson, who at the time was writing news articles, was invited to work on Trib Total Media's production of a 30-minute video documentary, "Olympic Oak," about the late 1936 Olympic gold medalist John Woodruff, who was from Connellsville. 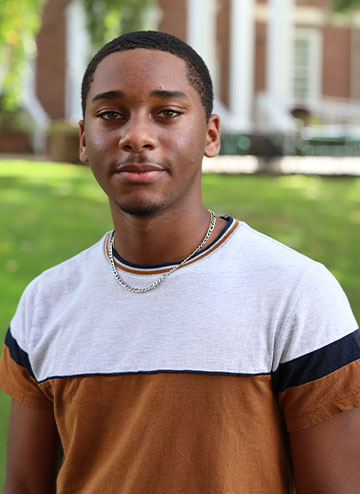 The documentary's production team working on the project included Jason Cato, a senior news editor who wrote the story, and others including Chris Benson, video editor, and Sean Stipp, director of visuals. Despite having several African Americans interviewed and narrating the documentary, the producers sought Gibson, not only for his perspective as an African American but as a younger person.

This was important because of the racial narrative of the Woodruff story. The 1936 Olympics in Berlin, Germany, was used by Adolf Hitler as a Nazi propaganda showcase to promote Aryan racial supremacy, which athletes such as Woodruff debunked by winning the 800-meter race. The 1936 Berlin Games marked a significant moment in athlete activism and the racial justice movements that continue today.

"(The production team) asked me a lot of times to look through the (edits) and make sure that they were doing the story the right way, not only doing justice to (Woodruff's) legacy, but bringing the Black voices to athlete activism in America," Gibson said. "So a lot of times they would ask me, 'Are we missing something?,' because they have their eyes on it but it's always great to have another perspective. I had a lot of input and influence to make sure everything was being done right by all sides."

"Zachary earned his spot on the team by demonstrating his commitment to telling the story and by showing his work ethic in the field while we were filming interviews and the narration sequences," Stipp said. "Equally important, he improved the final cut of the film with his willingness to openly share his perspective and insightful feedback during the video editing phase of the project."

Two of Gibson's contributions to the documentary were suggesting interviews with Candy Young, a 1980 Olympian, and a greater emphasis on Ky'ron Craggette, a Black student athlete from Connellsville. Young was more of a coincidence, since she is Gibson's aunt and they wanted to hear from other African American Olympians, but Craggette's inclusion helped bridge the gap to younger generations, especially young Black athletes from the area who can continue Woodruff's legacy.

"That was important to bring it to a younger audience because I would believe that the documentary mostly interests an older audience," Gibson said. "Ky'ron's part would pull in some of the younger viewers and student athletes and they could say, 'Oh, there's a kid like me who is running,' and they get to hear what he had to say about John. Especially for athlete activism, we need to be able to engage the current generation, so that they can learn about it and be a part of it."

Gibson worked not only on the storytelling, creative side of the production but also the technical side, helping set up cameras, lighting and audio for interviews. The project was a departure from the majority of his internship hours, which during the summer were Tuesdays, Wednesdays and Thursdays from 9 a.m. to 5 p.m., working as a staff writer. He covered everything from a Little Italy Parade in Bloomfield to sitting in on hearings at the Allegheny County courthouse.

His byline appeared on about one dozen articles published on the Trib Live website, including one about a professional class of Black leaders in Pittsburgh.

As part of the Trib Diversity Scholars program, Gibson receives up to $30,000 in scholarship funds, in $7,500 yearly installments, while interning at Trib Total Media during four summers. Upon graduation and completion of the internship program, he'll have an offer for full-time employment at Trib Total Media.

"(So far this internship has) definitely showed me a lot about what journalism is on the inside and what goes into writing and forming a better story," Gibson said. "I learned a lot of great journalism techniques when it comes to taking notes and interviewing people. I learned how to be independent because I started weeks after graduating from high school where I was used to teachers who were on you to make sure you did your work.

"This was a very hands-on internship and it wasn't like running coffee or anything like that. They put me to work because there is a mutual benefit and they want to see me grow and become a writer."

Gibson's mother, Stephanie Gibson, who is the guidance counselor at New Castle High School, encouraged her son to apply for the Trib's Scholarship for Diversity in Media. Gibson already had an interest in media, having started his own podcast, which is about current events from a Generation Z perspective. He also recognizes the importance of having a diversity scholars program in the media.

"Black students don't often see Black people in positions (like this)," Gibson said. "In my high school, there were only a few Black figures in prominent positions such as teaching, and one of them was my mom. We grow up seeing all of these people doing things, but we don't often see Black people doing them, and you don't see all the opportunities that are out there for you. Putting diverse people in positions shows everyone that they can do it, and other people can see them as something for them to work toward."