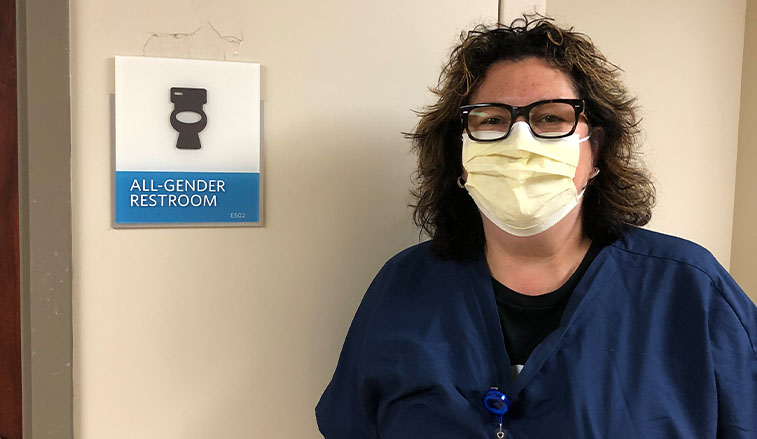 Renee Jannetti, a Slippery Rock University graduate student in public health who is a nurse at UPMC Shadyside, completed a practicum project that led to the conversion of single-occupancy restrooms to all-gender.

SLIPPERY ROCK, Pa. — As a nurse of nearly 20 years, Renee Jannetti knows that when people avoid health care, it could be a matter of life and death for them, or at least adversely affect their well-being. That's why she's doing all she can to make hospitals welcoming places for all people. Jannetti, a Slippery Rock University graduate student in public health from Cranberry Township, recently completed her practicum class project that spurred a change at the hospital where she works and others in the UPMC health system: upgrading the facility's single-occupancy restrooms from gendered to all genders.

"It's about making environments more inclusive and a welcoming place for individuals who identify as nonbinary or transgender," Jannetti said. "That it is a big challenge for people who identify as such because they might have a difficult time and not know where to go."

Jannetti, who is a nurse and unit director of the electrophysiology lab at UPMC Shadyside Hospital in Pittsburgh, approached hospital administrators about her idea for her class project last winter with the intention of pursuing a grant to cover the costs of switching signs on men's and women's single-occupancy restrooms to in order to designate them as all gender.

"UPMC, for a long time, has been supportive of the LGBTQ community, but whenever you come into the hospital you (previously didn't) see that reflected in those gendered restrooms," Jannetti said.

Kathleen Zell, vice president of operations at UPMC Shadyside, agreed that UPMC was "behind the times" and suggested Jannetti work on a proposal for executive management to consider financing, instead of a project funded through a grant. With the help from Jannetti's project preceptor, Kevin Urda, project manager for UPMC's Center for Nursing Excellence, as well as two other UPMC project managers, Joy Gero, who worked with LGBTQ+ health initiatives, and Justin Carnprobst, who worked with signage and graphic design.

Together, they identified more than 40 gendered restrooms at UPMC Shadyside to convert to all gender, which cost approximately $10,000 to update the signs on the doors and other directional signs and maps throughout the hospital.

UPMC's executive management not only approved Jannetti's request to update the 42 restrooms at Shadyside, but they also converted restrooms at UPMC's Presbyterian and Montefiore hospitals, adding a combined 278 additional all-gender, single-occupancy restrooms.

As part of her presentation to UPMC leaders, Jannetti sited national surveys indicating that between 20% and 30% of LGBTQ people have avoided and postponed seeking health care and 1 out of 6 LGBTQ patients experienced discrimination.

"When we improve the patient experience, we have better clinical outcomes, and to do that we need to know about the person," Jannetti said. "UPMC has recently updated their patient records to add an area for a person's chosen name, sexual orientation and gender identity, so this is another step toward welcoming people and enhancing the patient experience."

According to Jannetti, universal change for gender-inclusive restrooms should start with places such as government buildings and hospitals. and public health professionals should be catalysts to influence change.

"The initiative that Renee led during her practicum field experience shows the progressive thinking of SRU students and public health professionals," said Joe Robare, associate professor of public health and social work, who was Jannetti's practicum instructor. "Public health professionals positively impact our daily lives, and this is a great example of how community needs were identified, evaluated and implemented towards positive social change. Hopefully, this positive social change continues, not just across the UPMC system but other organizations and communities as well."

In 2016, SRU converted more than 70 single-occupancy restrooms to all-gender restrooms in 35 campus buildings.

The future of gender-inclusive restrooms will have greater barriers beyond changing signs for single-occupancy restrooms, as multi-stall restrooms are more common in large facilities.

"People are used to going into restrooms with others who are the same gender, but there can be other ways to be more inclusive and where everyone is comfortable," Jannetti said. "You could have, in addition to gendered restrooms, all-gender restrooms that are single stall or multi-stall. You see that now with single-stall family restrooms.

"This is all about making a more inclusive society," Jannetti said. "There's no reason why we should have so many LGBTQ persons who are afraid to disclose their identities or feel uncomfortable. They should be free to be who they are."

More information about SRU's Master of Public Health degree program, is available on the program webpage.