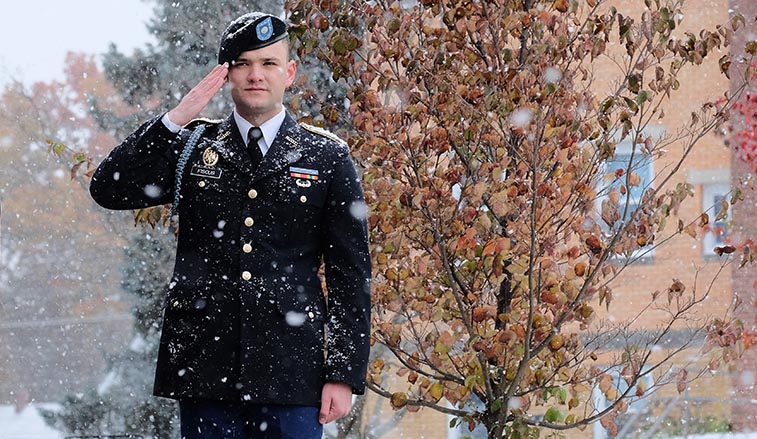 Slippery Rock University will honor veterans and military with several events including the Veterans Center Breakfast, Nov. 9, and a Veterans Day Ceremony, Nov. 12.

Jondavid Longo, the mayor of Slippery Rock, will deliver the keynote address for the Veterans Center Breakfast at 8:30 a.m., Nov. 9 in the Smith Student Center Ballroom. A 2015 SRU graduate, Longo served six years in the U.S. Marine Corps, including a combat deployment in Afghanistan.

"I think it's great that the University takes time to recognize veterans, especially when you consider that there are a lot of veterans who are coming out of the service and choosing institutions like SRU to continue their careers," Longo said. "Veterans around the world have helped secure our privilege to a quality education and, to take it a step further, helped establish that freedom for foreign nations to exchange thoughts and ideas. Academia, and education in general, have a lot to owe to military service. It's an honor to stand up in front of the community, to honor those folks who came before us and those who I got to walk with during my time in service."

Robert Snyder, professor of elementary education and early childhood, will be the keynote speaker at the Veterans Day Ceremony, 11 a.m., Nov. 12 outside the Russell Wright Alumni House. A 1992 SRU graduate who served 15 years as an officer in the U.S. Army Reserves Military Police, Snyder is the author of two books that educate children about veterans and the military. He often speaks at school assemblies in the area about his books and service to the country.

"I'm completely humbled to be asked to do this and I look forward to sharing my experiences as a veteran and shedding light on what all veterans have been able to do for our country," said Snyder, who was deployed in Iraq for a year in support of Operation Enduring Freedom in 2003. "I'll share the synopsis of a few veterans who are not well-known but who have done some amazing things that we, as citizens, can appreciate and those who exemplify the very best that veterans display in their duty to our country."

The Veterans Center Breakfast is part of SRU's Military Appreciation Week, Nov. 5-9, which is sponsored by the Office of Inclusive Excellence; AVI Fresh, SRU's contract food vendor; SRU's chapter of the Student Veterans of America; and the SRU Army ROTC.

In addition to Longo's keynote, the breakfast will include SRU student veterans sharing their testimonials, accompanied by video presentations. Other events during the week include the following:

• Letters to Soldiers, 5 p.m., Nov. 5, SSC, Room 322: Students will write letters to patients at VA Butler Healthcare.
• Protect the 22 Push-Up Challenge, 12:30 p.m., Nov. 6 and Nov. 8, The Quad: ROTC cadets will do 22 push-ups for every donation to the SVA's fund to provide a service dog to an SRU student veteran.
• Religion and the Military. Film and Discussion, 5 p.m., Nov. 7, SSC, Room 321: Faith-based student organizations at SRU will host a showing of the movie "Hacksaw Ridge," followed by a discussion.

AVI Fresh will create displays in Boozel Dining Hall and at Rocky's in the Smith Student Center that will include information about prisoners of war/missing in action; and an empty table setting for one to symbolize the frailty of one isolated prisoner of war and representing the concern by survivors for their missing loved ones.

The Veterans Day Ceremony, sponsored by the Office of Alumni Engagement, will include members of the SRU Army ROTC raising the colors, laying a wreath, firing a 21-gun salute and the playing of taps. Lt. Col. Joseph Richey, professor of military science, will recognize enlisted cadets, and the SRU Chamber Singers will perform the national anthem, Alma Mater and "God Bless America."

Donations to fund additional service dogs can be made by clicking here. There are also several scholarships that benefit SRU student veterans and ROTC cadets, including two named for fallen alumni of SRU's Army ROTC program, 2nd Lt. Christopher Loudon and Capt. Jason West. To support those scholarships, click here or contact the SRU Foundation at 724.738.2004.