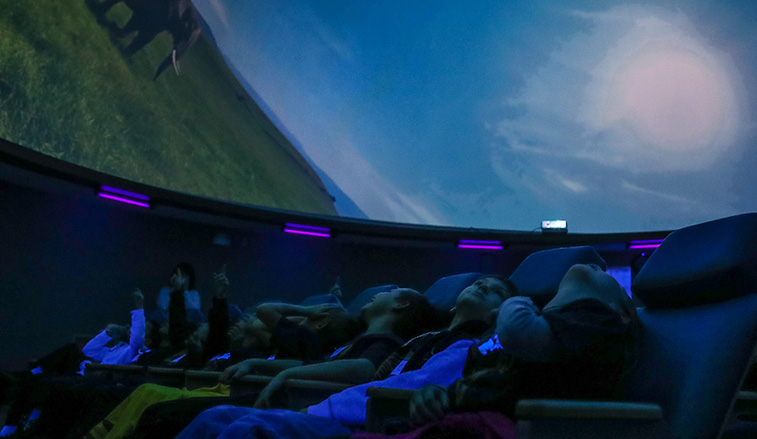 Slippery Rock University’s planetarium inside the Vincent Science Center will host an “Extravaganza” Nov. 14 as part of SRU’s 17-day celebration of the University and the inauguration of William Behre as its 17th president.

SLIPPERY ROCK, Pa. - While the 17-day celebration of the University and the inauguration of President William Behre could be categorized as an extravaganza, an actual one is part of the planned festivities.

The Planetarium Extravaganza, 4-5:30 p.m., Nov. 14 in the Vincent Science Center, will feature montages with wildlife, underwater and abstract visualizations, as well as a half-hour educational program about the mystery of dark matter in outer space. The event, cosponsored by Association of Pennsylvania State College and University Faculties, is free and open to the public.

Chances are, attendees may walk away with an out-of-this-world experience that will be difficult to exaggerate.

"It's great to have a planetarium like this that we can showcase," said Athula Herat, associate professor of physics and engineering, who will be the presenter for the Planetarium Extravaganza. "To have a facility like this on a small campus like ours is a big deal, and because it's all student-run is also a big deal." 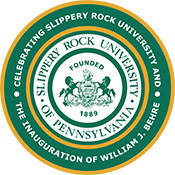 The planetarium at SRU is housed in the Physics and Engineering Department, but is entirely managed by 10 student workers from a variety of majors. Nearly six years ago a group of students, led by Dan Arnett, a 2014 SRU graduate with a degree in computer science, remodeled the planetarium, adding a digital sound board, mounting six digital projectors and writing their own open source software to display virtual reality images on the 30-foot-wide dome. Prior to that, the facility used an analog system and the shows were limited to traditional planetarium displays, like the placement of stars.

"The planetarium offers a unique experience that is both sensory and educational," said Cody Brant, a sophomore physics major from Greenville and manager of the planetarium. "And it's all students making this happen, so we like to show off the capabilities and we hope people enjoy it. It's definitely not something people see every day."

In fact, people can see it twice a week, as the planetarium hosts public showings Mondays and Thursdays from 8-9 p.m. In addition to the variety of shows created by SRU students, the planetarium also hosts community groups, like Boy Scouts and Girls Scouts who are attempting to earn their astronomy merit badges and elementary school field trips. SRU classes are also conducted in the facility, such as space science and astronomy courses taught by Krishna Mukherjee, assistant professor of physics and engineering, who is the faculty mentor for the students managing the planetarium.

"The planetarium is one of the places people such as potential students and parents, donors and other visitors like to see and get inspired by," said Herat, who added that the students who improved the facility saved the University from using a third-party vendor that could have cost the institution nearly $200,000. "(The students) did this on their own. What our kids did for a tenth of the price is incredible."

According to Herat, Manuel Valera, associate professor of physics and engineering, came up with the first prototype for the projector system and the students took the next step. Arnett, the student who took the lead, is now a graduate student studying robotics at Carnegie Mellon University.

"This is a great resume booster because you get to do different things all at once," Brant said. "You're programming software, operating audio and video equipment, learning about science and you need communication skills when you're working with the public groups that attend the shows."

Other recent updates include 12 black lights, which were added to complement a collaborative art and dance show last spring as part of the Kaleidoscope Arts Festival.