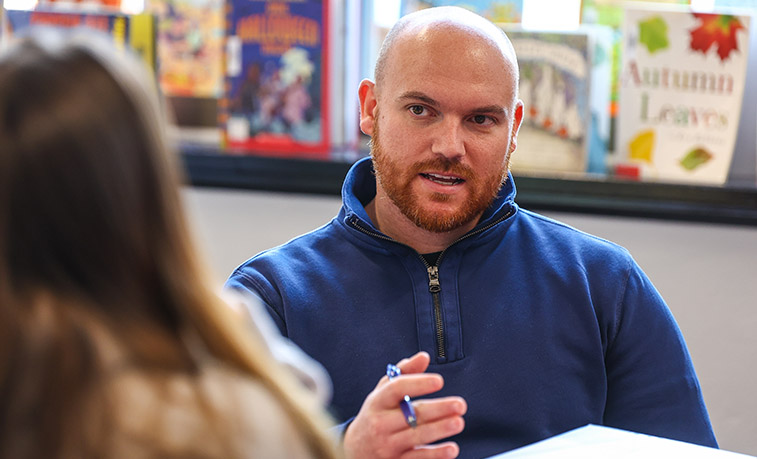 Jeff Hollidge, a Slippery Rock University junior dual major in early childhood and special education, attends class at SRU after deciding to switch careers, from being a police officer to a teacher. He serves as the police chief of the Harrisville Police Department while attending SRU.

SLIPPERY ROCK, Pa. — First responders run to where help is needed most. Sometimes that means going where few others are willing to go, where danger lurks on the other side of the door. Police officers like Jeff Hollidge do this every time they serve an arrest warrant. The 35-year-old has spent his 12-year career in law enforcement running to danger. But now, as a student at Slippery Rock University, Hollidge is running to a different kind of uncertainty and need. He is changing his career and becoming a school teacher.

"I haven't lost my passion for law enforcement, I just see a greater passion to educate children," said Hollidge, a junior dual major in early childhood and special education from Pleasantville, who is currently the police chief of the Harrisville Police Department. "Our future, and the future of our children, depends on our current education system and having teachers in the schools." 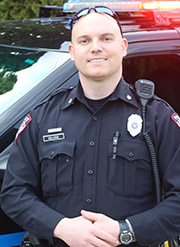 Hollidge is personally impacted by the shortage of teachers in Pennsylvania, which are down 66% in the last decade. His wife, Eva, is a teacher, and they have two children, ages 1 and 5, who will rely on the school system in the coming years.

"The teacher shortage right now is very, very real," Hollidge said. "COVID really impacted the schools with teachers leaving the profession. It opened my eyes and I started asking myself, 'What kind of future are kids going to have if they don't have education?' That was the biggest factor in me deciding to become a teacher."

As a police officer who has often referred people to children and youth services agencies, Hollidge saw the critical need for children to have strong mentors in the classrooms.

"I've seen very deplorable conditions when entering homes," Hollidge said. "Kids might not have stable families and when they come to school that could result in behavioral problems. Or they might be getting their only hot meal of the day at school. That's one advantage I can bring is knowing the cause of some of these problems and the importance of being a role model as well as an educator in the classroom."

He also said that despite his chiseled jaw and shaved head, he can relate to children more than what most people might think.

"People say I have a military or police officer look," Hollidge said. "It can be a false representation because people don't understand that I have this super fun side. I love being goofy and acting like a little kid. I can be just like a kindergartner sometimes."

The transition from police officer to teacher isn't as dramatic as what you might see in the movies.

"They definitely both thankless jobs, but I've never been the type of person who looks for a pat on the back or take credit for anything," Hollidge said. "I try to do my job to the best that I could possibly do it and make sure everyone's safe and happy. That carries from both law enforcement and education."

After graduating from Oil City High School in 2006, Hollidge studied criminal justice at Clarion University. He left Clarion before graduating to enroll in the police academy because he was tired of sitting in classes and he wanted to start working. He became a police officer in 2010 and served first with the Thiel College campus police, then Emlenton Borough Police Department and eventually in the Venango County Sheriff's Office as a warrant officer for nine years.

"It can be very dangerous work," Hollidge said. "You don't know when you make a traffic stop that you could be walking up to the nicest person in the world or a career criminal. When I leave my house each day, I probably tell my wife and kids 'I love you' 10 times before I walk out the door. I feel like I can't say it enough because I don't know if I'm going to home."

When Hollidge told his wife that he wanted to join her as a teacher in 2020, she thought he was joking at first, but after a few serious discussions, Hollidge decided to enroll at SRU, where Eva got her degree in elementary education in 2011.

"She's the reason I came here," Hollidge said. "She was extremely happy with the program (at SRU) and had a ton of positive things to say about the instructors, and I have some of them in class currently. I can relate to all the things she told me about the professors and I see how she benefitted. SRU has great programs for teacher preparation and I want to get the best education as possibly can get for my new profession."

"Jeff will be an outstanding teacher," said Joseph Merhaut, associate professor of special education, who had both Holllidges as students in his classes. "He's an excellent student. As a police officer I can see similarities in that he has to be consistent and fair to people and follow the rules. It's more challenging than ever to be teacher or a police officer. We need more people like Jeff entering both of those professions."

SRU is the premier institution for helping future teachers meet the challenges of the profession and meeting the needs of the workforce. According to the most recent count by the Pennsylvania Department of Education, SRU graduates earned 370 teacher certificates last year, which is more than any of the 96 schools in the state with teacher education programs.

Still, making the transition to go back to college wasn't an easy decision for Hollidge and his family.

"Even after I decided that this is what I want to do, we had to ask, 'How are we going to make it happen financially and with our time?'" said Hollidge, who enrolled at SRU in 2020. "Our second child wasn't born yet, and we had to figure out how we are going to support the family, even figuring out who's going to take care of the dog when my wife is at work and I'm in college all day. But once I make my mind up on something, I'm very determined fulfill that."

In 2020, Hollidge started working as a police officer in Harrisville Borough, an eight-minute drive from Slippery Rock, so he could pick up 30-40 hours of work each week between classes. He was later promoted to chief of the department, adding even more responsibility. But he's making it work, balancing classes, work and taking care of a family with two children who haven't started school, but they will by the time their father is a teacher. He said it's not a matter of if he graduates but when. He's on schedule to graduate in spring 2024.

"This will by far be the hardest thing I've ever done in my life, but it'll most definitely be worth it," Hollidge said.