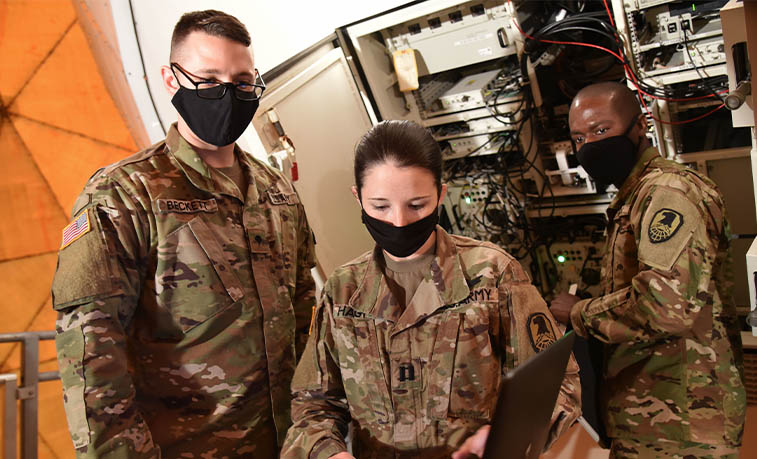 SLIPPERY ROCK, Pa. — The idea of juggling responsibilities is an understatement for Capt. Amber Hagy, a 2013 Slippery Rock University graduate with a degree in communication-emerging technology/multimedia. Yes, she's handling many tasks, but the responsibility part is something that, to most people, might seem unfathomable. Sixty soldiers and 11 civilian workers are under her command in a $55 million facility that operates 12 space satellites that serve as a communication link for all branches of the U.S. military.

"Communication, especially in the military, could be a life-or-death situation," Hagy said. "If a soldier is in the middle of a firefight, and loses communication, it could be catastrophic. (That's why) it's a large responsibility to care for this facility and the health and welfare of all the soldiers and personnel inside this building. We make sure that all of our users are getting the communication services they need." 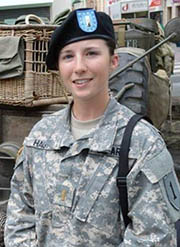 Hagy is a servant leader in many ways, and the highlights of her military career thus far are examples. Earlier in her career, Hagy was deployed to Kuwait and twice to Africa, during which she taught English to children in Tanzania on a humanitarian mission and was a field ordering officer for the Southern Accord 2014 mission, buying supplies and interacting with locals.

"I enjoy being entrusted with the responsibility of caring for all these personnel and making sure that a mission is truly a no-fail mission," Hagy said. "That's what I enjoy most about my job (as commander at the WSOC)."

The WSOC in Fort Detrick is one of five such centers in the world that the U.S. Army operates. The others are in Fort Meade, Maryland; Wahiawa, Hawaii; Landstuhl, Germany; and Okinawa, Japan. The WSOC provides all U.S. military branches uninterrupted communication and mission assurance, as well as access for thousands of global DoD Information Network users across joint, interagency, intergovernmental and multinational user bases. Access to the satellites are needed at home, abroad or at sea, whether it's training soldiers for deployment in Fort Polk, Louisiana, helping a ground unit in Iraq pass through a strategic terminal or assisting with a submarine resurfacing.

Although communication skills that Hagy learned at SRU, such as video editing and publication design, are not part of her daily routines, she said that her time at SRU served her well, even now as the WSOC commander.

"I still reflect on it after graduating almost eight years ago," Hagy said. "What I learned in the classes I took, such as public speaking and writing, those things helped me become a better military officer because that's a lot what we do."

Raised in a military family, Hagy was born in Louisiana but she calls Pittsburgh home after graduating from North Allegheny High School and enrolling at SRU. She was attracted to the University by its proximity to home and for its Army ROTC program.

"I absolutely loved my experience at SRU," Hagy said. "(With) the staff, the faculty, the students and the small classroom sizes, it was just an intimate setting that nurtured any sort of passion that students have. Most of my time was spent with ROTC. We had an extremely busy program that was involved with the school and the local community, and lot of my weekends were spent on cannon crew at SRU football games or training to get ready for our assessments."

Hagy, nee Fleming, married Aaron Hagy, who attended Clarion University but was part of the same ROTC battalion. Her husband is an intelligence officer at Fort Meade and together the couple has two children.

To learn more about the SRU ROTC program, visit the Department of Military Science webpage.