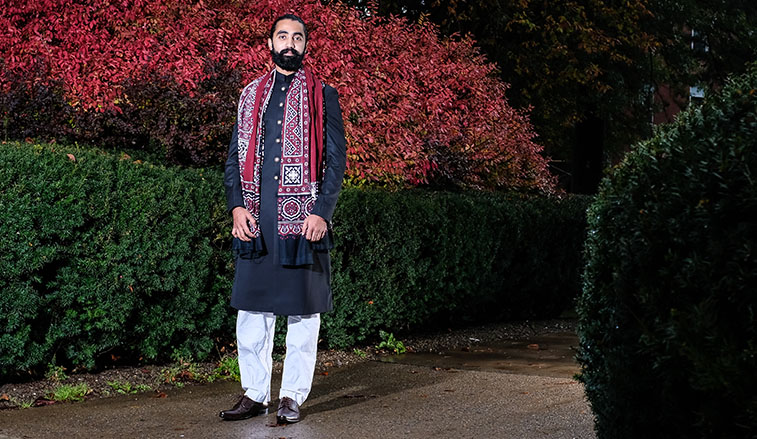 Chaudary Sarosh Farid, a Pakistan native attending Slippery Rock University this semester through a competitive government program, displays his formal Pakistani attire, including a Sherwani coat and an Ajrak shawl with patterns that represent his Sindh province.

SLIPPERY ROCK, Pa. - There are nearly 100 international students attending Slippery Rock University from more than 30 countries, each with a different background, worldview and comfort level for engaging with the campus community. One such student making the most of his experience is Chaudary Sarosh Farid.

After studying petroleum engineering at his home institution in Pakistan, Farid is embracing American culture and college life this semester at SRU, taking a dance class and pledging a fraternity, among a plethora of other opportunities he's taking advantage of while at The Rock.

Farid, who considers himself a free thinker, was selected to come to SRU based on merit through the International Research and Exchanges Board, which administers the Global Undergraduate Exchange Program on behalf of the U.S. Bureau of Educational and Cultural Affairs. More than 200 students from Pakistan are selected for participation in the competitive program with IREX matching them with institutions across the United States.

After living in Lahore, Pakistan's second largest city with a population exceeding 11 million, Farid was initially disappointed to be placed at a university in such a small town. That feeling was perpetuated when he came to campus in early August before the majority of SRU's other students arrived.

"I was like 'Where am I?', but when the classes started everything was good," said Farid, who had never been outside of Pakistan before attending IREX orientation earlier this year in Washington, D.C. "The most important thing I like about small places like Slippery Rock is it's the true representation of the people of America. If had been placed in a big university or a big city, I wouldn't have ever seen a small town like Slippery Rock, so I'm quite happy that I was placed here."

Farid has also had the opportunity to experience big cities, taking weekend trips to places like New York, Chicago and Los Angeles, where he said he saw just as many tourists and foreigners as he did American nationals. The skyscrapers and other modern amenities he encountered in those major cities confirmed his preconceived ideas of what America is like.

"We think of the USA as a perfect place or a utopian society," Farid said. "People here are just like people from any other place in the world, with people living in small towns. There are problems here, too. The most important thing that I learned is that people are still trying to solve problems. They don't lose hope. They manage their time so well. They respect other people. I like that."

Americans' tendency to be more punctual when it comes to starting classes and meetings is something noticed by international students and Americans studying abroad, but there are many subtleties that Farid found surprising, everything from street fairs, like Slippery Rock's VillageFest and vendors he discovered while in Hermosa Beach, California, to experiences using toilet paper instead of handheld bidet showers in the restrooms.

Farid captures all his experiences through photos and reflections via on online program called Cultural Passport, which is an IREX fulfillment, in addition to taking 12 credit hours of classes and conducting 20 hours of community service. He's also required to attend cultural events in several categories, meet with civic leaders or administrators and join student organizations before giving a public presentation at the end of the semester.

However, Farid doesn't consider his experience an obligation but instead an embracement of opportunities, like pledging a fraternity even though he won't be at SRU next semester.

"He's been trying to experience as much of America as he possibly can and have an experience that a typical American college student would have," said Carl Gardner, a sophomore computing major from New Castle, who is mentoring Farid through the new member process for Kappa Delta Rho as his "big brother." "But the thing with Sarosh, if you would have never known he was from Pakistan, I'm not sure you'd have known just by talking to him that he was an international student. He's a laidback, cool guy. It has really broadened our horizons having him around and we get to learn about different cultures and how it's different than what we're used to."

Farid has also broadened his horizons. He said he's been impressed with the diversity on the SRU campus and that he's been able to interact with other international students from places like Slovakia, Belgium and Hungary.

"It's been wonderful having him in class; he has such a positive attitude," said Jesse Factor, instructor of dance, who also has a global perspective, having grown up in South America and Thailand and coming from an SRU family that has worked abroad. "The way he asks questions and looks at movement is unique and that offers a lot to the class. It's been great to see him grow and take ownership of the material. He seems more comfortable with the movement and that can cross over cultural barriers."

Something else that transcends cultural barriers is community service. Among Farid's credentials that got him selected into the IREX program was his experience as a cofounder of Arz e Danish, a non-government organization that helps disadvantaged Pakistanis access education. As part of his community service at SRU, Farid is active with Shelter Sidekicks, a program that assists local animal shelters and humane societies.

IREX is selective when it comes to choosing students like Farid, who speaks three languages, English, which is taught in schools in Pakistan; Punjabi, his mother tongue; and Urdu, the national language in Pakistan. However, IREX is also selective when it comes to the institutions they choose as partners. While IREX funds the students' tuition, the board prefers institutions that have resources to support international students, a mutually beneficial cost-share agreement and a history of providing a positive experience for students.

"(SRU) is a great fit," said Genevieve Bordogna, associate director for international enrollment management in SRU's Office for Global Engagement. "(IREX) prefers to place students with us for a variety of reasons, including location, majors and cost-share, but a big reason is the feedback that students provide from their experiences here. That speaks volumes to what kind of an institution we have. We're very accommodating and there's a collaborative nature among the different offices here to provide international students a positive experience."

Farid will return to Pakistan next semester to complete his degree at the University of Engineering and Technology, Lahore and then either pursue a master's degree, perhaps returning to the U.S., or pursue work in the oil and gas industry in Pakistan.

"The people here are very welcoming," Farid said. "(This experience) has changed me a lot in developing more leadership skills so I'll be able to manage things more skillfully once I return."