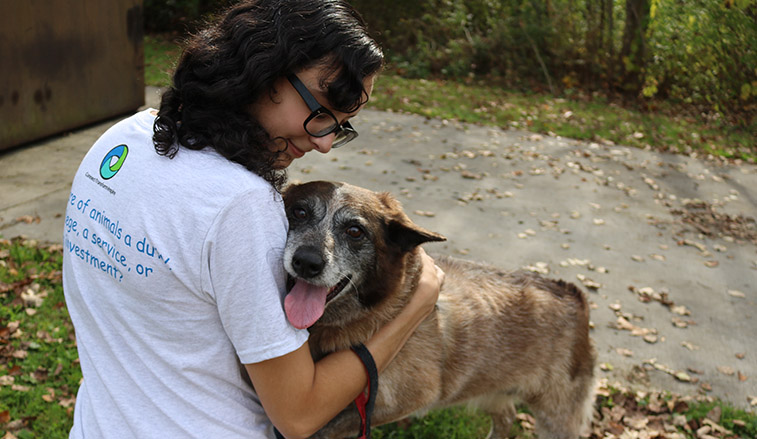 SLIPPERY ROCK, Pa. - What began as a Slippery Rock University student's idea to write holiday greeting cards on behalf of animals has turned into a service-learning program called Shelter Sidekicks.

In 2016, Sam Hauser, a senior developmental psychology major from Slippery Rock, started a campaign called "Happy Howlidays," where she and approximately a dozen other SRU students ghostwrote holiday cards from 40 animals that were housed at the Butler County Humane Society. The cards, given to visitors at the BCHS, encouraged people to adopt the animals, and as an unexpected consequence, encouraged the students to return to the facility as volunteers.

Now in its second year, Shelter Sidekicks is 20 students strong with four different groups volunteering at two locations - the BCHS and the Lawrence County Humane Society - every other weekend during the semester.

"Everyone enjoyed (their time there) and kept asking when are we going back," said Hauser, who became the program's service leadership coordinator through SRU's Office of Community-Engaged Learning. "So we decided to turn it into an ongoing program."

"They are priceless," said Debbie Aglio, BCHS director of community outreach. "We could not survive without the help of our volunteers and (the Shelter Sidekicks) have been so helpful. They are courteous, on time and they do everything with a smile."

Four sets of five students go to the BCHS and LCHS for two-hour sessions and volunteer by getting the animals out of their cages for personal interaction and play. Volunteers also help with other tasks, such as mopping the floors, but the facilities' greatest needs are socializing the animals so that they are more adoptable.

"It seems trivial but it makes a large impact on the animals because they don't get that socialization every day," Hauser said. "It's different being in a cage and getting fed than it is to be played and interacted with by a caring person."

BCHS, a small, non-profit organization with 15-20 full-time staff that relies on donations from community members to cover operating costs. The facility usually has upwards of 100 animals up for adoption, although that number can often fluctuate. Hauser was happy to see that a cat named Louise is no longer among them. Louise, sheltered since she was four weeks old, was recently adopted after spending more than seven years at the BCHS.

As part of the service-learning experience, SRU students go through an application process, receiving orientation at the facility and writing monthly reflections, journaling about their experiences caring for the animals and about topics related to the animal shelters. Hauser said that for many of the students, working at an animal shelter helped break some negative perceptions.

For example, many stray and surrendered animals are thought to be hostile or have a history of biting, but that's not what the Shelter Sidekicks have encountered at the BCHS and LCHS. Both facilities have a more stringent animal admission process and a policy against euthanizing their animals.

"This program has changed their views of animal shelters," Hauser said. "Shelters do the best they can, but there's only so much funding and volunteers. Shelters in large cities suffer (from lack of both) and the animals suffer because they don't have the money to keep them there."

With each site visit, SRU's Shelter Sidekicks are keeping local animals off that track and sharing their love with them so that one day those animals may be loved by others.

For more information about Shelter Sidekicks, including an application to volunteer during the spring 2018 semester, email Hauser at: srh1005@sru.edu.