SRU commission puts the person before the disability 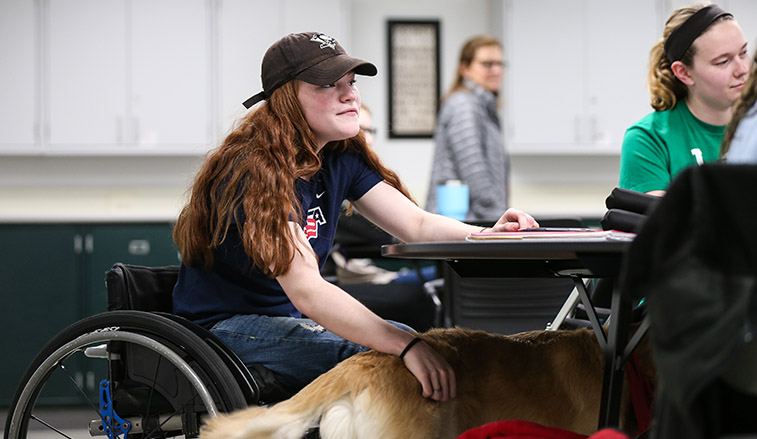 Slippery Rock University’s President’s Commission on Disability Issues advocates for students with disabilities, such as U.S. national sled hockey player Kelsey DiClaudio, who attended SRU last spring, and the nearly 700 current SRU students who are registered as having a disability.

SLIPPERY ROCK, Pa. - Emphasizing the person, not the disability, is one of the many topics being addressed by the Slippery Rock University President's Commission on Disability Issues. This includes the use of person-first language, such as saying the name of the student who has a disability and not referring to him or her as "that handicapped student."

"See me as a person and take my disability into consideration," said Lauren Sims, a junior special education transition programming major from Cheswick. "Don't just see me as my disability."

Sims, who is legally blind and hearing impaired, is a first-year member of the PCDI, which is a group of SRU administrators, faculty, staff and students who advocate for disability-related initiatives at the University. The PCDI, one of seven commissions created by the President's Office that advance the interests of SRU's diverse campus community, also sponsors programs that spread awareness about disability issues and get students involved in activities that foster inclusivity for people with disabilities, both on and off campus.

"I get an amazing feeling of pride every time I think about the fact that, despite my disabilities, I get to go to college and be here at SRU," said Sims, who is one of eight students on the 23-member PCDI. "By being on this commission, I get to be a part of helping other people with disabilities experience this feeling."

Organizing panel discussions about disability issues and displaying "Mindful Messages" posters around campus are part of the commission's campaign to raise awareness and respect for people with disabilities.

According to Kim Coffaro, assistant director of disability services and co-chair of the PCDI, the person-first identification approach is not intended to ignore disabilities.

"We're finding that some people are proud and embrace their disability as part of who they are, but we want to identify the person first before their disability," Coffaro said. "(Person-first language) is about treating someone with disabilities with respect and the way you would treat anyone else."

Coffaro said that acknowledging people with disabilities is important to achieving an inclusive campus and preparing those without disabilities for future interactions with those that do, either on campus or off.

"A lot of students come to SRU from small communities or have limited exposure to people with disabilities, so the experience on this campus is one that opens them up so that after they graduate and they are out in the world, they have better respect for this type of diversity," Coffaro said. "Our society is a melting pot. Many students here are affected by disability, including students with family members who have a disability or students in disability-related majors. It's a good conversation to have and to open up the topic."

Sims said members of the SRU community can do several things to create a better environment for people with disabilities.

"SRU students, faculty and staff can respond by learning about disabilities and by asking people with disabilities questions," Sims said. "You can learn so much just by talking to someone with a disability. People often think that they will offend me if they ask questions, but I would rather have people ask me questions than ignoring me or not helping me."

Nearly 700 SRU students, about 7 percent of the student population, are registered as having a disability. The University has an Office of Disability Services that provides resources for students, such as workspaces, assistive technologies and extended test-taking time. However, Sims indicated some of her challenges include making friends, navigating the campus at night and having all her professors fully understand the accommodations she needs.

Among the actions that Coffaro recommends is notifying someone when they encounter an accessibility issue on campus, such as an attendant at the University Information Desk by calling 724.738.4926. Also, people who don't require the use of automatic door-openers should refrain from using them because overuse can affect the devices' lifespan.

Coffaro said the PCDI is in the process of planning events like a "Stress Less Event" with the Recreational Therapy Department as well as a panel discussion in the Smith Student Center. One upcoming event already finalized is the Disability Sports Night, 5 p.m., Dec. 2 in the Aebersold Recreation Center, co-sponsored by the PCDI, the Adapted Physical Activity Council and the Recreational Therapy Club. The event will provide students the opportunity to play sports inclusive for people with disability, including wheelchair rugby, blind rock-climbing, seated volleyball and goalball. For more information, contact the ARC at 724.738.4800.