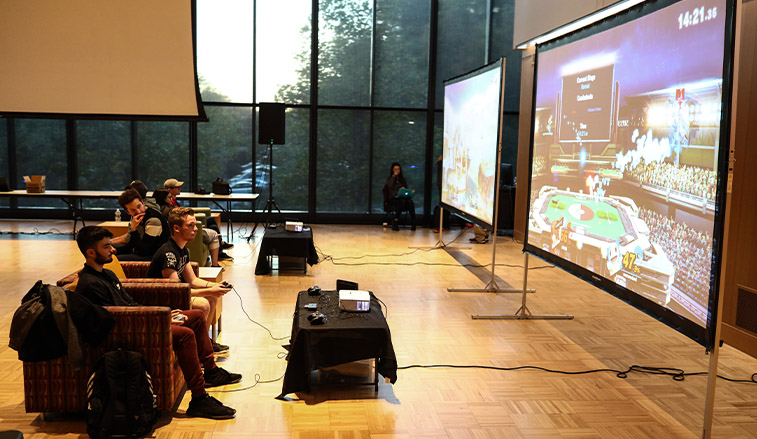 SLIPPERY ROCK, Pa. — Sports have long been a big part of college life. One needn't look any further than the plethora of packed football, basketball and soccer stadiums across the country. But there's a new player popping up on campuses across America; one that doesn't require cleats, hoops or balls. Instead, you just need to grab a controller and it's game on.

We're speaking of course about esports.

The popularity of esports, multiplayer video games played competitively, is not only at an all-time high in terms of participation in and viewership of professional leagues, but in the proliferation of college-sponsored varsity and club teams. At Slippery Rock University, there's a professor presenting research about esports, administrators monitoring their growth, at least one recent alumnus working in the industry and, of course, students playing esports -- a lot of them. 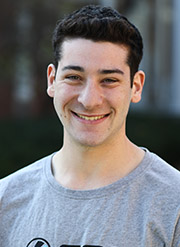 Membership in the Esports Club at SRU has reached nearly 100 students. The club was formed two-years ago with fewer than 15 members. Teams representing the Esports Club at SRU play in intercollegiate tournaments every weekend during the semester, playing popular video games like League of Legends, Overwatch and Counterstrike. Last month the University hosted its first tournament open to all SRU students. Competitors played Super Smash Bros.

"We've made some major progress this year," said Zeve Olbum, a junior communication major from Pittsburgh who is the Esports Club president. "People didn't know we existed until last year, and now we're gaining traction and there's more growth with the overall popularity of esports."

Last summer's Fortnite World Cup Finals at the Arthur Ashe Tennis Stadium in New York was watched by more than 2 million concurrent viewers on live-streaming platforms Twitch and YouTube. The world's top Fortnite players competed for a prize pool of more than $30 million and the champion, 16-year-old Kyle Giersdorf from Pennsylvania, took home the grand prize of $3 million.

The monthly esports audience was 167 million last year and many analysts are projecting those audiences to exceed each of the major professional sports leagues, except the NFL, by the year 2021. People are also playing video games at high rates: the Pew Research Center reports that, of people ages 18-29, 72% of men and 49% of women play video games often or sometimes.

Colleges and universities are getting involved by sponsoring teams, both at the varsity and club levels. The National Association of Collegiate Esports, the governing body for varsity-level esports, has more than 170 member schools after starting with only six schools in 2016.

The NCAA is closely following the growth of esports but has yet to commit to incorporating esports into the college athletics model the way it governs other sports. Paul Lueken, SRU director of athletics, attended two presentations about esports at the NCAA annual convention last year and is following a similar approach. 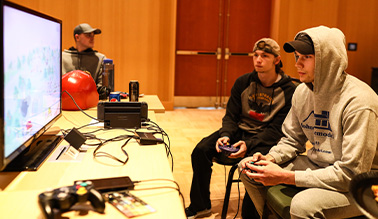 "It's certainly something we would support, but we just have to wait to see where it's going to fall within the NCAA framework," said Lueken, who, after the NCAA convention, met with members of the Esports Club at SRU. "We had a good conversation and learned a lot, but after that meeting and looking into it further, it will remain at the club level (at SRU) for the time being which is a good place for it to be right now because their sanctioning board is outside the NCAA."

But should we even be putting esports alongside football, soccer and basketball to begin with? That's a question Seth Jenny, SRU instructor public health and social work, addresses when he speaks about esports at conferences. Jenny most recently spoke at the annual meeting of the Mid-Atlantic Chapter of the American College of Sports Medicine in Harrisburg for a session, titled "Why You Should Care about Competitive Video Gaming," where he prepared sports medicine practitioners for the influx of esports injuries, such as strained wrists, eye strains, back pain and other repetitive motion injuries.

"Sport management as a field has grabbed onto esports, but fields like health and physical education are still very hesitant because (video games have) always been seen as the antithesis of physical activity," Jenny said. "You can say you binged watched Netflix for four hours, but if you say, 'I was playing Overwatch for four hours,' people look at you differently. I don't think either example is healthy (...) if you are not getting prescribed exercise recommendations."

Jenny, a 2002 SRU graduate with a degree in health and physical education, has given nearly 100 presentations and published more than 40 academic articles during his career in subjects related to esports, motion-based video gaming and distance running. After earning his doctoral degree in physical education, sport and exercise science from the University of New Mexico, Jenny taught at UNM and Winthrop University and co-wrote the curriculum for the first undergraduate major in esports sports science at Shenandoah University. He's also written a chapter for the first academic esports textbook, "eSports Science and Player Performance."

To answer the "Is it a sport?" question, Jenny presented a slide to conference attendees that draws on definitions of sports from the fields of sports sociology and sports philosophy. Jenny said a sport must be voluntary play, organized by rules, a competition (with a winner or a loser), comprised of a skill (no luck or chance), not a fad, have a broad following and it needs to be physical.

"People in general feel there's not enough physicality in esports for it to be a sport; however, that's typically because most sports involve gross motor movements," Jenny said. "There are not a lot of sports that just involve fine motor skills, which, in the case of esports, involves manipulating a handheld controllers or a mouse. But (in esports) it's not a matter of how fast you click a button; there is strategy, timing and movement accuracy. People don't have a problem calling shooting or archery a sport, and those are Olympic mainstays."

"It's a different category of sports," Olbum said. "I wouldn't call it a traditional sport, but you exert a lot of energy, and even though it's not the same physicality-wise, it's still about teamwork, strategy and putting all your effort into it. You can say that for a lot of sports."

Jenny said that esports can be classified as an "outsourced performance sport," in which most of the movement is not being conducted by the player, such as in auto racing or horse racing.

Another part of the definition of sports is institutional stability. That's a threat to the growth of esports as a traditional sport because a game publisher who can change the strategy owns the games.

"If we used basketball, for example, nobody 'owns' basketball, but someone owns Overwatch," said Jenny, who has worked as a consultant for the ELEAGUE, a professional televised league on TBS. "The licensing is also a hiccup for it becoming an NCAA sport. Typically the game publishers are regulating the tournaments. One of the biggest leagues is the Overwatch League. They are franchising and having teams in different cities and they are traveling to home arenas to compete just like you would in a traditional professional sport, which is a big movement."

The growing reach of esports is already having an impact on SRU alumni.

An OWL franchise recently hired Adam Britton, a 2019 graduate with a degree in communication, as a graphic designer for the Washington Justice, one of 20 OWL teams in six countries. Britton designs promotional materials and digital assets including social media graphics, logos and other content that appears on the team's website and videoboards. Last year, all the franchises played their games in a television studio in Burbank, California, but for the upcoming 27-week season, beginning in February 2020, at least two cities will take turns each weekend hosting games.

"Prior to looking for jobs in the field, I never considered or thought I'd get a job in an area like esports," said Britton, who interned with the Pittsburgh Steelers last summer working in scoreboard operations at Heinz Field. "The reasons esports are exploding are because people have the money to support these types of teams and they are realizing money can be made off this business. There are a lot of people who enjoy not only watching the games but they are watching them being played in person." 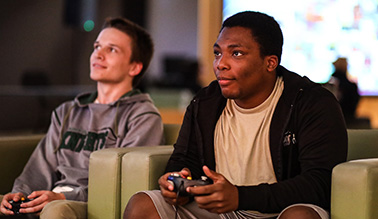 The Esports Club Team at SRU plays Overwatch at the intercollegiate level in a league sponsored by Tespa, an organization that governs more than 270 college chapters of esports club teams in North America. The club team at SRU designates eight of its members for a roster and play six-on-six games that last about 45 minutes against teams from schools like Penn State and Rutgers. Teams representing SRU play at tournaments in Pittsburgh, Ohio and across the Northeast. In addition to playing in Tespa's Overwatch tournaments, the club team at SRU plays in the Collegiate Starleague, the world's first collegiate gaming organization that started in 2009 and now has 55,0000 active players from more than 1,800 teams. Most of the tournaments award prize money, scholarships or gaming equipment to the winners.

Olbum hopes that, as esports continue to build scale at SRU, further support would lead to a gaming lab at the University and possible scholarships awarded to players.