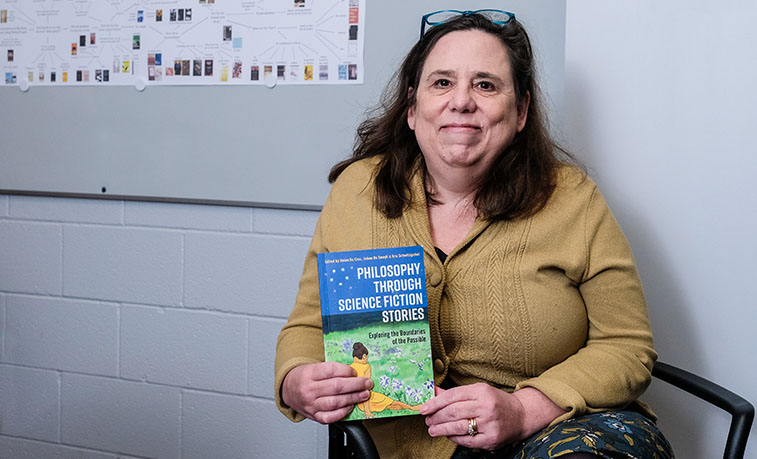 SLIPPERY ROCK, Pa. — The conversations between Aristotle and Plato at the Academy in ancient Greece might seem worlds or even alternate universes apart from those of Captain Kirk and Mr. Spock on the bridge of the U.S.S. Enterprise in "Star Trek." But there's a close connection between the study of philosophy and science fiction. According to Lisa Schoenberg, a Slippery Rock University associate professor of philosophy, the science fiction genre is a perfect fit for interpreting philosophical concepts.

"You can make up anything you want," Scheonberg said. "Philosophers tend to use thought experiments which are fictional cases that might not be possible in the real world in order to illustrate a point. This goes way back to the earliest days of philosophy. Fictional stories, as long as they are interesting and entertaining, can be useful to test different kinds of ideas about how things might be different in the future, or how implications of different technologies in the future might play out, so (philosophy and science fiction are) very much a natural combination."

From George Orwell's "Nineteen Eighty-Four" and Aldous Huxley's "Brave New World," to more recent examples, such as Suzanne Collins' "The Hunger Games," works of science fiction help people become philosophical thinkers. Scheonberg has contributed to the genre as well. Her short story and essay were published in "Philosophy through Science Fiction Stories," an anthology edited by Helen De Cruz, Johan De Smedt and Eric Schwitzgebel that was recognized by the Washington Post among its "Best science fiction, fantasy and horror of 2021."

Scheonberg's short story, "The Adjoiners," was originally published by the Sci Phi Journal in 2017 and was selected as the winner of the American Philosophical Association's Philosophy Through Fiction Competition. De Cruz was one of the contest organizers and later selected "The Adjoiners" for the anthology, which included stories by authors such as Aliette de Bodard and Ken Liu, who are well known in the science fiction and fantasy circles.

In "The Adjoiners," Scheonberg described how Andrea, a researcher at a U.S. Fish and Wildlife Office, used a brain implant that allowed her to "adjoin" to an eagle, which also had an implant, creating a neurological connection where Andrea could not only experience the sensations of the bird, but influence it to move to a better habitat. Initially used for medical and research purposes, these implants, called "adjoiners," started to become popular for recreational use.

Although they were used as brain aids for children with learning disabilities, adjoiners provided teenagers recreational use, as Andrea soon discovered. Her son, Colin, was assaulted by a classmate whose mind was overwhelmed by multiple adjoiners egging him on in a teenage high jinks practice called "cramming," and FBI investigators determined that Colin, despite being the victim of the assault, was part of the mob.

"That's the piece that is of philosophical interest to me," Scheonberg said. "There's always been this interesting question of whether you can commit a crime against yourself."

Hazing is a notable example of people committing a crime against themselves while giving consent - or being manipulated to give consent - but it can become even more murkier with medicinal mental manipulation, crowd-sourced acts of crime and even exposure to technology that most people willingly use today, such as social media platforms that have powerful algorithms designed to influence behavior and thoughts.

"People want to (use mind manipulation or technologies) but it changes them beyond what they would maybe have wanted from the outset, despite doing it intentionally," Scheonberg said.

Scheonberg teaches a Medical Ethics course at SRU where the topics of neurotechnology and mind manipulation are discussed, and she assigns students a paper about how medical ethics could change in the future based on developing technologies. In many of her classes, Scheonberg often gives students the option to write more creative work, such as science fiction, instead of traditional academic papers.

"Students are very interested in thinking about what all these (emerging and potential) technologies might mean," Scheonberg said. "Artificial intelligence is a big topic that has been addressed for a very long time, but I think some of the newer technology that has to do with directly affecting what's going on in the brain, either through medication or some kind of technological intervention, is very interesting. People are studying it and thinking about what might happen. And it might not happen, or it might not happen in the way people expect it."

Either way, science fiction is an effective way to conduct thought experiments, think into the future and, as the anthology's subtitle suggests, "explore the boundaries of what's possible."

For more information about the philosophy programs at SRU is available on the department webpage.