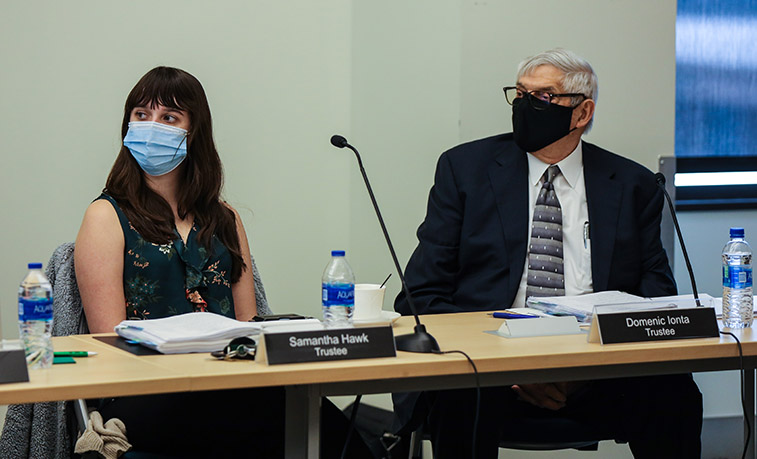 From left, Slippery Rock University trustees Samantha Hawk and Dominic Ionta were among the 11 council members who voted on several action items at the Dec. 10 quarterly business meeting.

SLIPPERY ROCK, Pa. — Slippery Rock University's council of trustees voted to advance a proposed tuition increase to Pennsylvania's State System of Higher Education board of governors for approval. The proposed 2% increase would amount to approximately an extra $183 in tuition and fees per student for the 2022-23 academic year and would represent SRU's first tuition increase since 2018-19.

The council's action, based on the recommendation from University administration, was conducted at its quarterly business meeting, Dec. 10, at the Smith Student Center. The tuition proposal passed by a 6-5 vote.

Prior to the three straight years of tuition remaining flat, annual increases were at or near 3% since 2013. A proposal for a 3.5% increase was approved for 2020-21 and tentatively for fiscal year 2021-22, but it was not implemented because of economic uncertainty related to the COVID-19 pandemic.

"Like many other universities, SRU continues to recover from the economic impact of the pandemic," said SRU President William Behre. "Our goal is to keep delivering value to our students by providing a high-quality education at a cost that is affordable compared to other institutions in our region and the State System."

The proposal for 2022-23 is expected to result in an approximate tuition and fees increase of $183 per student for the entire academic year. The tuition increase would generate approximately $1.7 million in revenue for the University to address an anticipated budget shortfall that is expected to range up to $4 million based on the increasing costs of goods, utilities and other operating expenses, as well as employees' wages, salaries and benefits that are collectively bargained at the state level.

Tuition and fees account for 64% of the University's revenue that offset a budget of nearly $150 million in total expenditures.

"This tuition increase will allow us to keep our commitment to financial aid that our students rely on," Behre said. "We've continued to invest in financial aid without recent tuition increases, and with this new increase, we'd be offering as much or more aid as we have in the past to keep an SRU education affordable, especially for those with the greatest need."

SRU supports students with $8.8 million in institutional and SRU Foundation-supported financial aid and it will maintain and enhance this commitment through the approval of this proposal. More than 68% of the 2021 freshman cohort received some level of institutional aid.

"The council always takes a request to increase the tuition very seriously," said Matthew Lautman, chair of the SRU council of trustees, who was among the five dissenting votes. "We held a special workshop in November and we had our committee meeting this week to really vet it. I voted against it because, to me, it's really not the right time for this, but I appreciate and respect that majority rules on this council. These are always difficult decisions, and I know that even the people who ultimately voted in favor of it, they recognized (the increase) as a necessary evil. These are sensitive matters because they affect so many people."

SRU's tuition rate proposal will now be voted on by the BOG at their quarterly meeting, April 13-14, 2022, in Harrisburg.

Other action taken at the meeting included the approval of a naming resolution in which Room 207 in the Strain Safety Building will be renamed the Rockford Systems Classroom. Rockford Systems, LLC, from Rockford, Illinois, has pledged to provide SRU's safety management program with machine safeguard training and equipment, including a mechanical press, for an in-kind gift totaling more than $167,000 for the next five years.

Additionally, the council approved amendments to its bylaws, the evaluation of the president and the certification of compliance for affiliated entities.

Also at the meeting, the council received a presentation from Karla Fonner, dean of students, about student care coordination and behavioral intervention, as well as the President's Report, reports from its standing committees and the trustees heard a review of finance and divisional reports.

Through its standing committee meetings Dec. 9 and earlier in the day, Dec. 10, the trustees received:

The next quarterly business meeting is scheduled for March 3-4 at the Smith Student Center.

More information about the trustees is available on the SRU website, as well as a link to the Dec. 9-10 meeting materials.