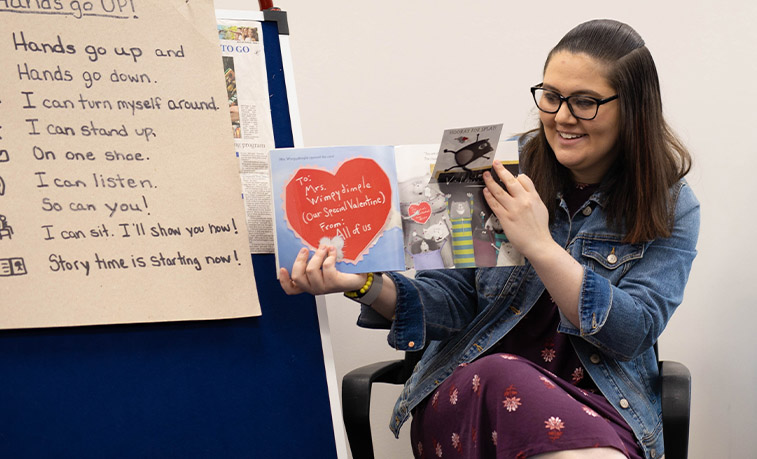 SLIPPERY ROCK, Pa. — As Sydney Kresconko reads aloud from the pages of children's books while leading "Story Time" at the Slippery Rock Community Library, none of the young attendees are aware that she recently turned the page on a scary conflict in her own life. Kresconko's story can't be found in the books she reads for local children, but all too often the villain of her story, cancer, afflicts young and old alike, just as it affected Kresconko when she was 13 years old.

Now as a Slippery Rock University student, Kresconko is living the resolution part of her story as she reads much happier tales like "Splat the Cat" and "How Do Dinosaurs Say I Love You?"

Kresconko was diagnosed with stage 4 lymphoma in 2012, and endured two years of chemotherapy and 25 surgeries. But that part of her story is not something she shares with the children. They just know that Kresconko is reading them a story to brighten their day. And that's what makes the SRU student shine.

"It sounds super corny but I just love being around kids; it makes me happy," Kresconko said. "I've only been doing this for a few weeks, but the kids are really excited to see me and that's really fun."

Kresconko is working this semester at the SRCL as part of her six-credit Field Placement Internship in Psychology. She's leading one of two weekly Story Time activities, Tuesdays from 10:15-11 a.m. (the other is Tuesdays 5:30 p.m. to 6:15 p.m.); a weekly Homework Helpers session, Thursdays from 3:30-5 p.m., for kids in grades K-12; and she's also helping library staff prepare for its summer reading program and other short-term, themed programs, like an upcoming Harry Potter Hogwarts camp.

"The service-learning partnerships that we've had between SRU and our library have been huge," said Karen Pierce, director of the Slippery Rock Community Library. "We have benefitted so much, both the library and community, by having the University students share their time and expertise."

Other SRU students have worked at the library as well, with the SRCL acting as a Bonner Leader community partner site, in addition to hosting class projects in disciplines that include archeology, criminal justice and computer science. But Kresconko's work with SRCL is unique for the amount of time she spends on site, which is 20 hours per week.

"She's been really able take time to absorb this experience, and we've learned a lot from her, too," said Pierce, noting examples from Kresconko's interest in development psychology and normative development, such as helping children cope with things like a visit to the dentist or a fear of thunderstorms.

"Throughout my education, my focus has been on children and I just wanted to be able to get into a setting where I could interact with children in a more natural way versus being in some kind of clinic, like what many of my (classmates are doing for their internships)," Kresconko said. "That doesn't mean I'm not going to be around kids who need special attention or have some type of diagnosis, but this setting gives me more of an all-around approach."

After Kresconko's long stays at Children's Hospital in Buffalo as a teenager, she became interested in child psychology and pursuing a career as a child life specialist, which is a health care professional who works with children and families to help them cope with the challenges of hospitalization, illness and disability.

"They are like therapists (who work with children) without the kids really realizing that they are receiving therapy," Kresconko said. "They'll do different things like play games and (facilitate) education to help the kids understand what they're going through. When I was first diagnosed, I didn't really want anything to do with it; I just wanted to forget about it. But the (child life specialists) made me realize that this is going to be part of my life forever and they helped me accept it or else I would've had a really hard time going through it. These were people who really helped me throughout my medical journey, and I realized that, 'Wow, these people really helped me and I want to make a difference (like they did for me).'"

Kresconko also noticed the influence that she had on fellow patients and their families. About a year into Kresconko's treatment, she got to know the family of a two-year-old named Kallie who had a similar diagnosis. Kresconko and her family offered Kallie's family advice about the same medications and surgeries that the two girls had encountered.

"Knowing how much of an impact that made on that family really made me passionate about this (as a career)," Kresconko said. "After (Kallie) went through relapses, she eventually passed away, but her family was so thankful (for my sharing with them) and that meant a lot to me. I realized that if I could have that much impact on a single person, I could only imagine what I could do for multiple kids."

"It's very common for students who have had a personal connection to things like mental health issues, want to study psychology," said Emily Keener, associate professor of psychology. "They want to help other people or understand other people because they'll say, 'Gosh, I wish somebody would have been able to help my family when we were going through a particular or similar situation.'"

Although Kresconko never hid her battle with cancer, Keener wasn't fully aware of the extent of her condition despite having her as a student and as a research assistant for the study Keener is leading about the effects of inclusive and exclusive pronoun usage.

"She's an amazing person and it's incredible for her to have gone through what she did and still be the standout student that she is," Keener said. "Sometimes people who have these types of experiences really understand how life is short and precious. She seems to make the most of her experiences and takes them seriously."

Kresconko is also involved with the Love Your Melon Association at SRU, a student organization that assists children and families experiencing childhood cancer. The group gets its name from the national organization's initiative to put a hat on every child battling cancer in America. She has also shared her story at SRU's annual Relay for Life fundraising event for the American Cancer Society. She's even had conversations with fellow SLRC volunteer Tiffany Frampton, who is also a cancer survivor, about forming some type of local support group for cancer survivors of any age.

But for now her focus remains on entertaining the children at SRCL with engaging stories and trying her best to assist at Homework Helpers.

"Hopefully I'm making a positive impact during my time at the library and forming relationships with the children that will have a positive and lasting impression on them," said Kresconko, who after graduating from SRU this spring plans to move back to New York and enroll in an online graduate school program for child life specialists. "This experience has showed me that I'm on the right track and I'm doing what I'm supposed to: work with children."