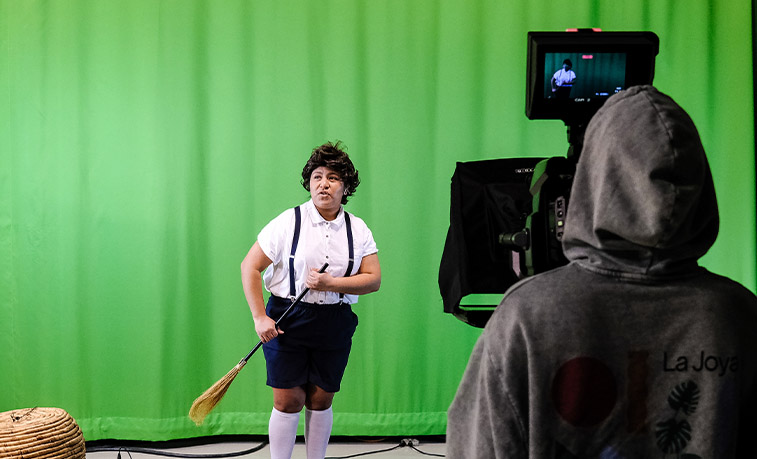 Hannah D’egidio, a Slippery Rock University junior music education major, performs the part of Hansel in front of a green screen for a scene from “Hansel and Gretel” that will be part of a remote opera production titled “Scenes on the Green.”

SLIPPERY ROCK, Pa. — "Hansel and Gretel" is a fairy tale that was adapted for opera, but how would the German siblings adapt to physical distancing to sing a duet? Thanks to a collaboration at Slippery Rock University, the answer is in front of a bright green screen with even brighter faculty and students improvising despite remote learning.

Timothi Williams, a first-year music instructor at SRU, reached out to the University's Strategic Communication and Media Department for help producing the performance aspect of her Opera Performance class. The seven students in her class have yet to gather as an entire in-person group this semester because of COVID-19 safety measures.

Luckily, Brittany Fleming, an assistant professor in the SCM department, and one of her student workers were able to help bring together not only the music and communication disciplines, but also students singing duets, in a virtual setting. Fleming provided use of technology in the Maltby Converged Media Center, including cameras, microphones and a green screen. Green screens are used as backgrounds in front of which moving subjects are filmed to allow a separately filmed subject, also in front of a green screen, to be added together in a final video.

In this project, students in Williams' class are being filmed performing one part of a duet in front of a green screen. Their singing partners are filmed separately and the two pieces will be edited to produce a final video that will appear as if the students are performing on stage together. 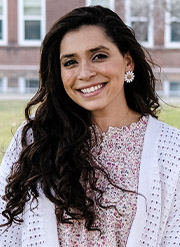 "I have never done anything like this before so it's new and exciting to us," said Williams, a mezzo-soprano singer who has had several operatic roles on stage during her career as a professional artist. "This project is special because it allows us the opportunity to continue a creative outlet in this time when it's very difficult to do so. This gives our students something to work toward that they really have appreciated."

Details are to be determined about when and where the final production will be publicly shared online, but Williams already has the title of the piece.

"We're calling it 'Scenes on The Green,'" Williams said. "There will be roughly 10 different scenes that we will be presenting from different types of opera, with each being about 5-10 minutes."

Opera scenes will include "Hansel and Gretel" by 19th-century composer Engelbert Humperdinck, with Ben Robinson serving as the librettist, which is a person who writes the text of an opera. Others scenes include those from "The Old Maid and the Thief" by composer Gian Carlo Menotti and "L'incoronazione di Poppea" by composer Claudio Monteverdi.

Opera is much different than what the Maltby Center green screen is normally used for, which includes news broadcasts of WSRU-TV, the student-run television news station at SRU.

"This has been a great collaborative project based on the fact that we've all been at a distance for so long," said Fleming, the faculty adviser for WSRU-TV. "We've had controlled group projects and rotations in the studio with my multimodal classes, but this is the first time in about a year that we've had a student working with a client who has no experience with this kind of production. It's a great a learning opportunity."

The student working in the control room and gaining the experience is Chase Cavallaro, a senior communication major from Central Point, Oregon. Cavallaro operates the camera equipment and the TriCaster, which is a product that merges and records the video with virtual sets and mixes the audio.

"The scale of this production is something that's new to me," Cavallaro said. "There was a lot of different communications that we've had to set this up. This has helped me coordinate better with clients rather than just being behind the scenes."

Although Cavallaro is highly involved with capturing of the video and audio, the final editing of the "'Scenes on The Green" will be outsourced to Xavier McAllister, a freelance video editor from Columbus, Ohio.

The student performers, however, are "in house" even though they aren't under the roof of the Maltby Center at the same time.

Hannah D'egidio, a junior music education major from Industry, wore a costume and sang the part of Hansel, two days after her duet partner, Katherine Frontz, a sophomore music performance major from Pittsburgh, was in the studio to sing the part of Gretel. D'egidio had an earpiece to listen to Frontz's recording when she sang her part, and vice-versa.

"Especially as (an aspiring) music teacher, this has helped me learn how to adapt," D'egidio said. "(Williams) has done a phenomenal job coaching us through it. We staged it all in our bedrooms with different props. In fact, and even one day I even used had a vacuum cleaner as a prop (at home). It's definitely been a challenge and not what I expected when I signed up for an opera class, but it has been so rewarding and I'm so excited to finally be in this position to perform what we've been working on.

"It just shows you that even a pandemic can't stop music education."

More information about the Music Department and Strategic Communication and Media Department are available on the SRU website.