SRU honoring those who ‘break barriers’ for students with disabilities 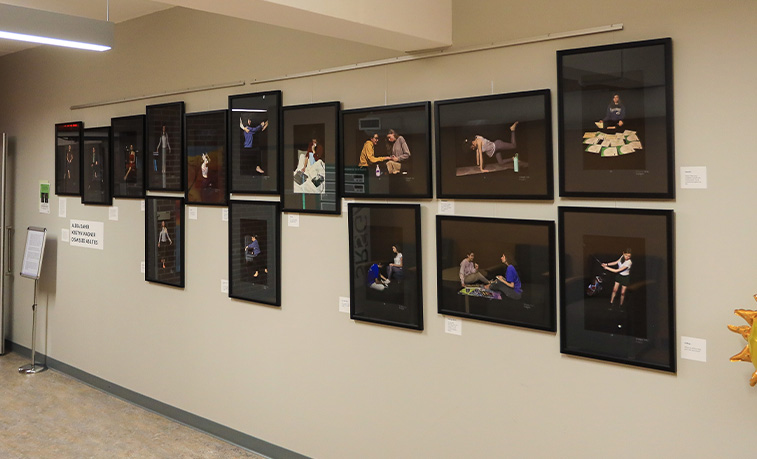 A photography exhibit in Slippery Rock University’s Bailey Library recognizing people with disabilities was commissioned by the SRU President’s Commission for Disabilities Issues to coincide with its annual Breaking Barriers Awards ceremony.

SLIPPERY ROCK, Pa. — The name of two awards at Slippery Rock University couldn't be more fitting for describing what their recipients do: reducing and removing barriers for people with disabilities. The SRU President's Commission for Disability Issues is presenting its 2022 Breaking Barriers Awards at a private ceremony on campus, April 25.

"I know it might sound cliche, but that's literally what I do," said Natalie Burick, SRU director of disability services. "I remove barriers so students can participate in academics and University programs when they have a disability."

Burick is the recipient of the Breaking Barriers Award for faculty or staff this year, while Jaclyn Lenhart, a junior recreational therapy major from Gibsonia, is the student recipient. Each year, the PCDI recognizes students, faculty and staff who "demonstrate advocacy, leadership, and/or empowerment in the area of reducing contextual barriers in the physical, social, or attitudinal environment for individuals with disabilities at SRU." 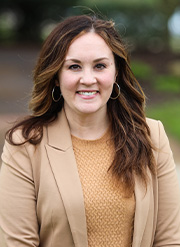 "I was surprised because I didn't know that I could be recognized for my advocacy," Lenhart said. "It's important (for SRU) to recognize those who are putting in the effort to reduce the stigma or the barriers that come with differences in people (who have disabilities)."

"I'm absolutely honored to receive this award and be recognized for all the hard work," Burick said. "This award and the work that PCDI does are so important because they bring recognition and awareness to people with disabilities on campus. At one point it might have been a taboo subject for many, but it's OK to celebrate disability as part of a person's identity."

Burick has led SRU's Office of Disability Services since 2018, advocating for nearly 700 students, approximately 8% of the student population, who are registered as having a disability, whether it is a developmental disability, such as autism; a physical disability, like a visual impairment; or a mental disability, including post-traumatic stress disorders. Examples of services include providing workspaces, assistive technologies, extended test-taking time and one-on-one coaching for students.

Emphasizing a holistic approach to serving students with disabilities, Burick has shifted the philosophy of the ODS from a transactional approach to helping students advocate for themselves and make their professors and classmates aware of their needs. Part of the shift has been leveraging technology, including an online system called Accommodate that Burick helped implement. This online software processes accommodation requests and reads documentation.

Lenhart is a student who benefitted from services offered by ODS. She had endured multiple hospitalizations and traveled to get acute rehabilitative care during her time as an SRU student. Lenhart has battled Crohn's disease since her diagnosis at age 17 and she has advocated and volunteered with the Crohn's & Colitis Foundation. While hospitalized, she came to better appreciate the impact people can have on those with physical disabilities and became an advocate on campus through her interactions with professors and classmates and within her recreational therapy major.

Living with Crohn's disease, Lenhart returned to SRU as a full-time, residential student in fall 2021 only to encounter an even more significant, life-changing setback in November when she suffered a spinal cord injury and is now paralyzed. She was at home at the time of the injury, which occurred in her sleep, and doctors haven't been able to determine the cause, but they suspect it is related to her autoimmune disease. She now uses a wheelchair and, while at first she was paralyzed from the neck down, she has regained movement above her waist through rehabilitation. She has yet to resume classes at SRU since her injury but she plans to.

Also coinciding with the PCDI's Breaking Barriers Awards ceremony is a photography exhibit that is available for public viewing on the second floor of the Baily Library through May 6. The exhibit, titled "Dismissed Abilities," features portraits of Alexa Daher, a Kent State University student with facioscapulohumeral muscular dystrophy, taken by her friend, fellow Kent State student Kristyn Wagner, with the goal to remove people's misconceptions that disabilities all look the same and that people with disabilities cannot live independently. Their exhibit was previously displayed at the Butler Art Museum of American Art in Youngstown.

More information about ODS and the PCDI are available on the SRU website.