SLIPPERY ROCK, Pa. — Attending Slippery Rock University as the "only brown kid in theatre" was transformative for Isha Rao, a 2020 SRU graduate who earned a degree in theatre. It has kick-started her career and led to her pointing a spotlight on people of Asian heritage in the American theater industry.

"Everything I know about American theater I know because of SRU; I didn't have any exposure before that," said Rao, who in 2017 transferred to SRU from the Mithibai College of Arts in her native Mumbai, India. "(My SRU experience) was great. I was so glad that I had very supportive faculty and SRU theatre will always be my home and family."

Because of her experience at SRU, Rao was able to virtually attend the Kennedy Center American College Theater Festival, a national theater program involving more than 18,000 students from 600 colleges in the U.S. She also completed a virtual fellowship, sponsored by the KCACTF, called the ASPIRE Arts Leadership program, which is designed to mentor and advance the careers of young leaders of color in American theater.

Rao was impressed by the KCACTF and the feeling was mutual. Rao won two honors and a combined $6,000 in cash awards from the KCACTF, which earlier this spring held virtual awards ceremonies to account for the last two years, as the 2020 event was postponed because of the COVID-19 pandemic. Rao won the 2020 Charlene Gordon Arts Impact Awards, recognizing distinguished emerging arts leaders, advocates and activists, as well as the 2020 John Cauble Emerging Leader Award, honoring an outstanding participant of the ASPIRE Arts Leadership program.

What impressed the KCACTF fellows who chose the recipients was Rao's perspective and advocacy for underrepresented actors in American theater, particularly her speech for the Impact Award that was inspired by a question asked of her while attending the KCACTF. 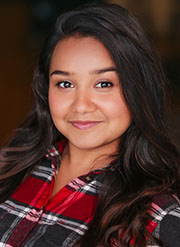 "I was just bowled over," Rao said. "I remember someone asked me, 'Do you have any monologues that were written for South Asians by South Asians?'"

She didn't, but that question piqued Rao's interest, leading her to asking more questions of the profession and conducting her own research. When she first came to the U.S., Rao said her eyes were "full of star-studded Broadway dreams" and "flashing marquee lights," and she believed she could overcome anything, but that also blinded her from potential barriers. She now wonders, "Am I allowed to audition for a part that's traditionally played by white actors?"

"I had all of these questions and that's when it really hit me how much representation matters and how much I've been impacted by not seeing (someone who looks like me) on stage," Rao said. "We're still not yet at a place where (South Asians) can have mainstream roles; you're probably going to get the part of nurses, pharmacists or doctors."

This stereotype casting, which Rao said is slightly different than typecasting, is something that Rao confronted in her research, which began as a student at SRU. For example, she discovered that only 23 people of Asian heritage or descent have ever been nominated for Academy Awards. This, as well as her critique of the lack of Asian diversity among American theater companies, was included in her speech that she submitted for the Impact Award application.

"The only way to bridge this chasm is to radically amplify South Asian voices and give them a platform to tell their stories," Rao wrote in her speech. "Stories that aren't just for Asian American and Pacific Islander viewers. That's what being an arts advocate means to me."

Rao received $1,000 for the Impact Award and will also receive either expenses to participate in the Arts Advocacy Day presented by Americans for the Arts in spring 2022 or a Kennedy Center residency later this summer. She received $5,000 for the Emerging Leader Award.

Rao's emergence within the theater industry began at SRU where studied under two concentrations: theatre arts management and acting. Among her roles, she played Madame Arcati in the SRU Theatre Department's 2019 production of "Blithe Spirit." She's since returned to SRU as a professional alumni collaborator, writing and directing part of the Theatre Department's virtual fall production in 2020.

After graduating in 2020, Rao worked 10 months as a marketing fellow at the Arena Stage at the Mead Center for American Theater in Washington, D.C., while living in the D.C. metro area. In May 2021, she completed her ASPIRE Arts Leadership fellowship which was intended to occur when she was a college student but it was delayed a year because of COVID-19.

Earlier this month, Rao started a virtual marketing and public relations internship with the Steppenwolf Theatre Company in Chicago.

Receiving the KCACTF awards, including the $6,000, certainly has given Rao momentum for her career in theater.

"As someone who is very passionate about immigrant audiences and immigrant stories being represented on the American stage, I'm honored to receive these awards because they mean that I'm being seen and heard and my contributions are valued," Rao said. "I'm going to save all (the money) and invest it so that hopefully I can start my own theater company someday."