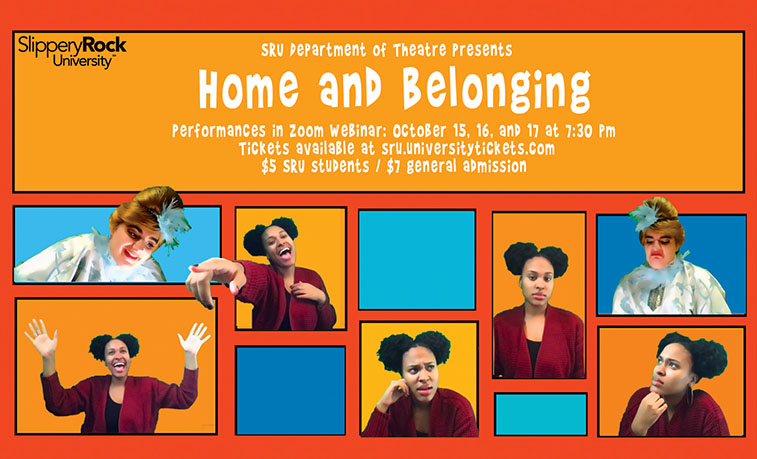 SLIPPERY ROCK, Pa. — Since theatergoers are unable to attend shows in person due to COVID-19, Slippery Rock University's Theatre Department has decided to bring the theater to patrons' video screens with its performance of "Home and Belonging." Performances will be 7:30 p.m., Oct. 15-17 via Zoom.

Directed by Laura Smiley, associate professor of theatre, and Malic Ma'at, a guest artist and 2015 SRU graduate with a degree in theatre, "Home and Belonging" is a series of performances woven together as the protagonist Lilah's fever dream transports her through time and space during an existential exploration.

The subject matter of the performances is timely in that it encompasses civil unrest in the face of police brutality, unequal access to health care, cancel culture and self-doubt. The play addresses these topics and more through Lilah's personal understanding of, and experience in, today's United States. The production is meant to get audience members thinking about the current state of the nation through both collective and personal experiences.

"At its core, this devised piece is a manifestation of time spent together exploring the madness in the world around us and unpacking the ways in which we hold ourselves and each other accountable within it," said Ma'at.

The approximately 90-minute production is composed of seven smaller performances with each covering a unique topic linked by Lilah's fever dream. Each segment was directed by students and alumni guest artists before being weaved into one larger performance.

The various productions include:

"This production did not grow from a script, but instead, grew from the collective stories, experiences and creativity of the artistic team," said Smiley. "It brings together a variety of people for a creative collaboration in order to shape the entirety of the project."

Tickets are $7 for general admission and $5 for SRU students and can be purchased online. A link will be sent to each purchaser the day of the event and will only be active for that day's performance.

The production is recommended for mature audiences only.