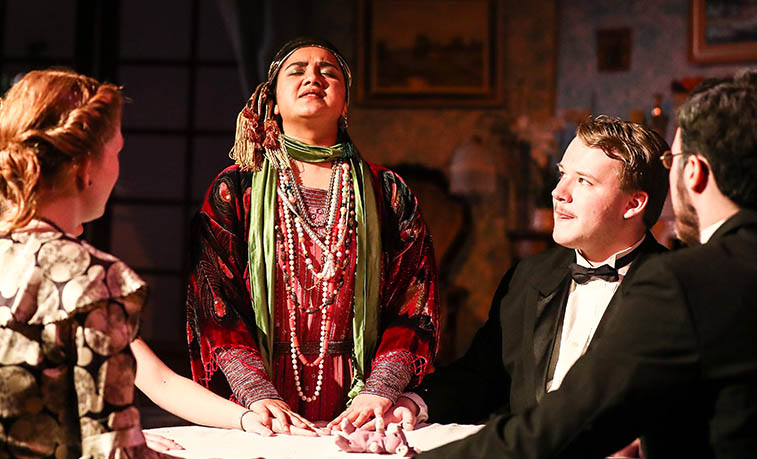 Coward (1899-1973) was an English playwright, composer, director, actor and singer known for his wit, humor and flamboyance. His play centers on socialite and novelist Charles Condomine, who is on his second marriage following the death of his first wife years earlier. Hoping to gather materials for his next book, Condomine invites eccentric clairvoyant, Madame Arcati, to his house to conduct a séance. When the medium is successful in summoning the spirit of his deceased wife, Condomine must then deal with both his wives as the situation quickly grows out of hand.

"We tend a bit more towards the dark side in this department, so we thought our student actors weren't getting enough chances to do something funny," said David Skeele, SRU professor of theatre and director of "Blithe Spirit."

"We do a lot of material that is kind of challenging and disturbing, and while comedy does have its darker side as well, we really wanted to do something that was lighter and funnier and give some students in the department a chance to experience what it's like to play this kind of comedy.

"It's a genre that's called 'comedy of manners' and it usually parodies and satirizes the upper classes. It's about people with a real sense of style in their lives and people who have a beautiful way with language. The material celebrates and makes fun of them at the same time."

Tickets are $12 for general admission and $10 for SRU students and children under 18. A "Community Night" admission of $10 for all attendees is scheduled for the March 3 performance.

Tickets can be purchased at the Smith Student Information Desk, by calling 724.738.4926 or by visiting the University Union Box Office.