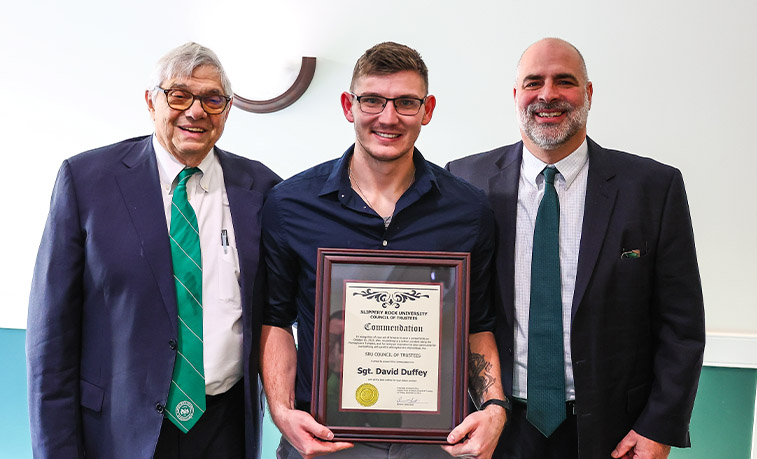 From left, Slippery Rock University trustee Domenic Ionta with SRU student Sgt. David Duffey and SRU President William Behre, as Ionta presented a commendation from the SRU council of trustees to Duffey for his act of heroism.

SLIPPERY ROCK, Pa. — The Slippery Rock University council of trustees approved several action items at its quarterly business meeting, Dec. 9, at the Russell Wright Alumni House. As part of the University's presidential search process, the trustees recommended two candidates to the Pennsylvania Board of Governors; they approved a new fee rate for the Rock Life program, a new faculty liaison to the council, and two naming resolutions; they also issued a commendation and a surprise scholarship to an SRU student for heroism.

The council approved the SRU Presidential Search Committee's recommendation of Chance Glenn, provost and vice president for academic affairs at the University of Houston-Victoria, and Karen Riley, provost at Regis University. The state's Board of Governors will interview the candidates next week with a decision being announced in the following weeks.

"We're very happy with the process and the diverse pool of candidates," said Jeff Smith, SRU trustee and chair of the search committee. "The candidates were well represented by their different cultural, geographic and experiential backgrounds. This result demonstrated the depths the search committee went through to distill more than 90 candidates down to two."

SRU has been searching for its next president since February 2022 when SRU President William Behre announced his retirement, effective June 30, 2023. Four candidates were on SRU's campus, Nov. 28 to Dec. 2, meeting with several campus and community groups.

"The candidates were all impressed with the University, and as a committee we were impressed with them," Smith said. "It was a difficult decision but with the committees' perception and the feedback from the campus community we are confident with the recommendation and grateful for everyone's input."

The council presented a commendation to Sgt. David Duffey, a senior dual criminology and criminal justice and psychology major from Midway, in recognition of his act of bravery to save a truck driver's life on Oct. 16. Duffey was driving on the Pennsylvania Turnpike while returning to Slippery Rock after his Army National Guard weekend training when he witnessed an accident and intervened. He pulled the driver out of a burning cabin of a truck seconds before it exploded.

Duffey attended the meeting to receive the commendation from the trustees, but unbeknownst to him he also received a $1,000 scholarship from the SRU Foundation during the presentation of his commendation. Duffey plans to pursue a graduate degree at SRU in the spring and become a criminal justice professor.

The trustees approved a fee rate increase for Rock Life, a specialized program for students with intellectual and developmental disabilities who want to pursue an inclusive college experience. The per semester fee will increase from $3,000 to $3,850 for all new students in the program beginning in the 2023-24 academic year. Returning students will not have to pay the extra $850 per semester.

The rate increase accounts for a restructuring of the program from a two-year to a four-year program, as well as enhancing other direct services and programming. Launched in 2016, Rock Life currently has 12 students. The restructuring takes effect in fall 2023, and organizers plan to expand the offerings to as many as 50 students by fall 2026.

The trustees approved Danette Dimarco, professor of languages, literatures, cultures and writing, as the new SRU faculty liaison to the council of trustees, replacing Lia Paradis, professor of history, who served as liaison since June 2020 and is retiring. As a non-voting liaison, Dimarco will provide input to council as it considers matters impacting the delivery of education.

The University Union, which will undergo an $18.3 million renovation next year, is being renamed the Campus Success Center. Upon its completed renovation, this building will house the following offices: the Office of Disability Services, the Financial Aid Office, the Student Support Office, Mailing Services, the Parking Office, the Student Counseling Center, the Center for Career and Academic Progress, and the Student Health Center, as well as shell spaces for future development.

The remainder of the business meeting included the trustees receiving the President's Report, reports from its standing committees, and a review of finance and divisional reports and other informational items.

More information is available on the meeting material binder. The next council meeting is scheduled for March 23-24, 2023.