Slippery Rock University opened its doors on March 26, 1889 as Slippery Rock State Normal School. Its first president was James E. Morrow, grandfather of Anne Morrow Lindbergh, and the enrollment for the first session was 168 students. Limited to a singular mission in teacher education, the normal school over the years fulfilled its mandate well, graduating thousands of students to staff the public schools in Pennsylvania and throughout the nation.

In 1926, the institution was purchased by the Commonwealth, became a four-year teachers college, and continued the tradition of teacher training. While the curricular preparations were in elementary education and in a number of secondary education subjects, the area of academic focus which was assigned at that time by the Pennsylvania Department of Education was in health and physical education. And it was in that concentration that the institution soon achieved a national reputation for excellence.

Slippery Rock State College was established in 1960 and for the first time, could award undergraduate and graduate degrees in the liberal arts and in the professions. Expanded curricular offerings and an increased number of degree programs created an appreciable rise in enrollment. From 1960 to 1970, enrollment rose from 1,314 to 5,446 students. Over a decade later, as part of the Pennsylvania State System of Higher Education, Slippery Rock University enjoys an enrollment of some 8,852 students in more than 100 degree programs. Students are enrolled from 41 states and 34 countries.

A History of the Principals and Presidents of Slippery Rock University

The term "Principal" was the title used for the chief executive officer of the Slippery Rock State Normal School at its founding in 1889. Initially, the Normal School offered primarily a two year education. Students successfully completing the curriculum and all state-level examinations were awarded the Bachelor of the Elements diploma and permitted to teach in the Commonwealth of Pennsylvania public schools. This diploma was not equivalent to a four-year, baccalaureate degree. However, as Slippery Rock State Normal School developed a three-year and ultimately a four-year curriculum, it became eligible to award a four-year bachelor's degree. The name of the school could not be changed officially until it graduated the first student. The graduation and subsequent name change to Slippery Rock State Teacher's College occurred in 1927. From that point forward, the title "President" was used. 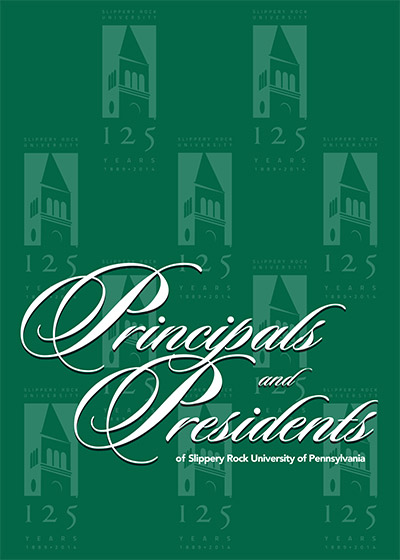