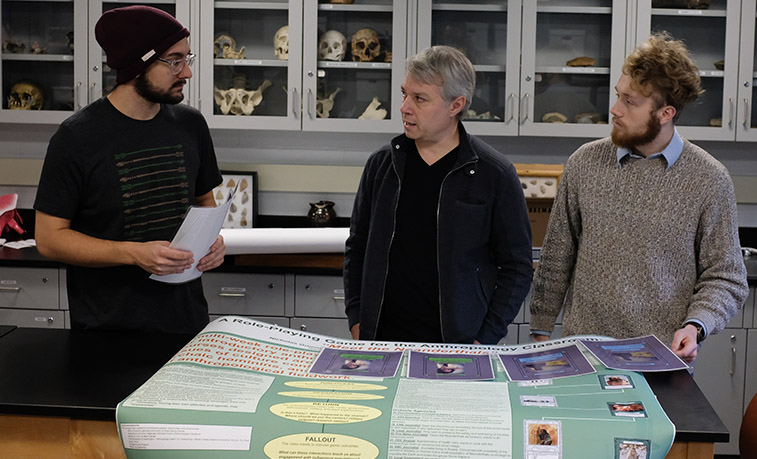 SLIPPERY ROCK, Pa. — College classes aren't all fun and games. But some of them can be. At Slippery Rock University, faculty and students are putting a lot of thought into a role-playing game as a way to help students learn.

Aksel Casson, assistant professor of anthropology, is leading a project that has students developing a role-playing game called Meet the Neanderthals for anthropology and archeology classes. Casson and his students began developing the game after Casson studied active learning pedagogies alongside SRU history professors last year, some of whom are creating role-playing games based on a concept called Reacting to the Past.

RTTP games, developed at Barnard College in the late 1990s, are conducted during class sessions where students are assigned character roles, informed by historical context, with specific goals. By playing the role and adhering to the character's beliefs, students communicate, collaborate and compete to advance each characters' objectives.

"Game-playing is a strategy to get more buy-in from students," Casson said. "Rather than assigning reading or having a lecture as a way to deliver content, this is a way to get students prepared in advance instead of reviewing what they learned. The students are occupying a character for two weeks."

Zach Rogers, a junior secondary education-social studies/history major from North East, played a role-playing game earlier this year based on the trial of Joan of Arc in a Medieval Church class taught by Paula Rieder, associate professor of history. Rogers is one of four students developing the Meet the Neanderthals game. As many as 10 students have contributed to the game's design since Casson started the project last year.

"As a player of the game, you have to interact with other students and I found myself doing a lot of research outside the classroom," Rogers said. "It got me involved with the content and I started writing a lot more. This also gets you asking more questions and engaging more with the topic through conversations."

Meet the Neanderthals is based on a hypothetic anthropology research team that encounters a lost, living population of hominins, in this case Neanderthals, that are discovered in East Siberia.

"The objective is not to change the classroom mechanics or even to teach about Neanderthals as much as it is to teach about culture and what happens when scientists encounter indigenous groups and what that means today," Casson said. "For instructional purposes, I thought it made the most sense to call them the Neanderthals because we know the most about them."

Students are given a card representing a character from one of three factions: an Anthropology Team, consisting of scientists, guides and translators; the Neanderthals, made up of hierarchical roles like matriarch, shaman, warrior and hunter; and Outside Agencies, such as public health officials, journalists and commercial funding groups. The instructor of the class presents information to the factions, or teams, through a series of prompts by issuing the teams Story Event Cards and individuals, Random Event Cards. Teams vote on how to respond to events, like illness spreading through a village. Individual voting can be influenced by players' experiences through Random Event Cards, like accepting aid or forgiveness from other players, based on their motivations and biases.

The game is played during six, 50-minute class periods ending with the fallout of the interaction between the groups. Ultimately, the Neanderthals disappear; however, there are no "winners" or "losers," but rather learning outcomes achieved by considering the ethical and cultural effects and civic responsibility resulting from interactions between different communities.

Casson compared the game to a choose-your-own-adventure story conducted by the students.

"We want the story to go in a direction with some variability, but the professor leading the dialogue has the ability to use a Random Event Card to push the story back in line with the objectives," Casson said. "This is participatory learning, and even though it's unlike the (Reacting to the Past) games for history classes that are based on real people, the students are still having the experience of being someone in real time."

In addition to Rogers, SRU students involved in developing the game include: Nicholas Grimm, a sophomore interdisciplinary programs major from Erie; Kendal Keech, a junior biology major from Shinglehouse; and Megan McCarthy, a senior interdisciplinary programs major from Butler. Colleen Elwell, a sophomore park and resources management major from Valencia, joined the project this semester to draw artwork for the playing cards, which are inspired by the popular card game Magic: The Gathering and the tabletop game Dungeons & Dragons.

Last month, Casson, Grimm, Rogers and Keech conducted a poster presentation about Meet the Neanderthals at the American Anthropological Association annual meeting in Vancouver, British Columbia. Last spring, Casson and Grimm presented an early version of the game at the Society for American Archaeology annual meeting in Albuquerque, New Mexico.

"Working on this game is interesting because it makes me think about the entire project from an outside perspective," Grimm said. "It's easy to look at the work we've done and imagine it theoretically but I have to think about how other people would play it and how it will work for other students."

A previous iteration of Meet the Neanderthals, which involved dice, focused too much on game play and not learning outcomes, according to developers. It is common for game developers to take years to perfect their games. Rieder, who first learned about RTTP games six years ago, worked on her Joan of Arc game while on sabbatical in spring 2018.

"Once you play the game and you get student feedback, you revise it and then you play it again, so it takes quite a few years to hone the game into something that's really workable," Rieder said. "There are a lot of benefits to (a role-playing game) because it gets students involved with materials, like primary sources, and the time period while taking on the perspective of characters whose ideas that they otherwise would be unfamiliar with or maybe dislike and not agree with, such as slavery, but it forces them to think about things from a different point of view and understand the historical context."

Casson said Meet the Neanderthals is not yet ready to be played in a class but he might demo the game in his Archeology class next semester.

"It's getting closer and closer to (being a) finished product," Casson said. "The content and rules of engagement are set, now we just need to develop the handouts. What's great about it is it's a general game, but it can have design elements where an instructor can be more specific to the goals of a course."