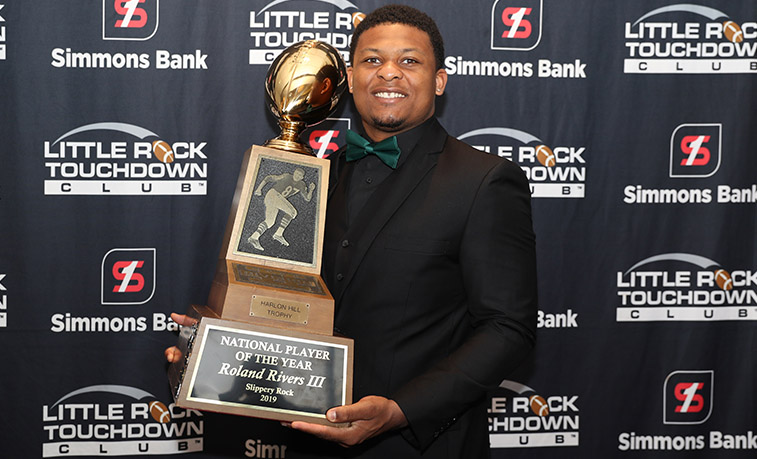 Rivers, who is the first SRU player to ever win the award, was presented the trophy following an introduction from Jerry Hill, the son of the trophy's namesake.

"I want to thank the Little Rock Touchdown Club and the Great American Conference for hosting this event and honoring me and the other award winners," said Rivers. "I also want to thank the Hill family, my parents, coaches, the administration at SRU and especially my teammates and brothers back at The Rock. Choosing SRU was one of the best decisions of my life and I am so proud to have my name next to our school's name on this trophy forever."

Rivers had the honor of meeting two-time Heisman Trophy winner Archie Griffin at the banquet, as Griffin was the event's featured speaker. He also got to share the stage with Kyle Dugger from Lenoir-Rhyne, who was presented with the Cliff Harris Award as the top small college defensive player in the country.

The banquet also featured a number of high school and collegiate awards dedicated to players from, and that play, in the state of Arkansas.

"What an incredible event," said Shawn Lutz, SRU head football coach. "The Little Rock Touchdown Club really took care of us and welcomed our whole group with open arms this week. I especially want to thank David Bazzel and Richard Atkinson from the LRTC for taking care of us and Will Pruitt and Eric Moyer from the GAC for everything they do for the Harlon Hill Award. We're so proud of Roland and excited for his future and we're truly honored that we got to celebrate this with him. I also want to thank President Bill Behre and our athletic director Paul Lueken for joining us to support Roland and our program today. We really have one of the most special programs in the country and it was easy to see that today."

Rivers won the honor after shattering multiple SRU records while leading The Rock to a 13-1 overall record and a trip to the NCAA Division II semifinals in 2019. He led the nation in passing yards, passing touchdowns, total offense and points responsible for. To read more about Rivers' 2019 accomplishments, click here.

Rivers will now travel to San Diego, California to begin training with a quarterbacks coach prior to the NFL Draft. He has also been invited to play in the Hula Bowl in Hawaii Jan. 26.