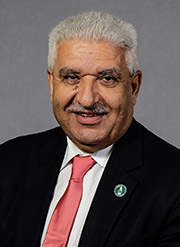 "For the past several months, Dr. Mohammadi has been leading a task force charged with reviewing the University's advancement strategies; improving coordination of activities between and among the University, the SRU Foundation, the SRU Student Government Association and the SRU Alumni Association; and laying the foundation for a major gifts campaign," Way said.

"One recommendation that has already emerged from the task force was the need to restore the position of vice president for advancement. Pending the appointment of a new president, this will be an interim position. Since Dr. Mohammadi has been leading the discussion, and already has the Office of Advancement Services reporting to him, he was the best person to keep these efforts moving forward," Way said.

Ed Bucha, executive director of the SRU Foundation, said, "Amir is an excellent choice to serve in this interim role. He understands the value of a strong advancement effort and brings years of experience in working with foundations at several universities to the table. It is imperative to have someone in a leadership role guiding Slippery Rock University's advancement efforts. We're looking forward to working with him."