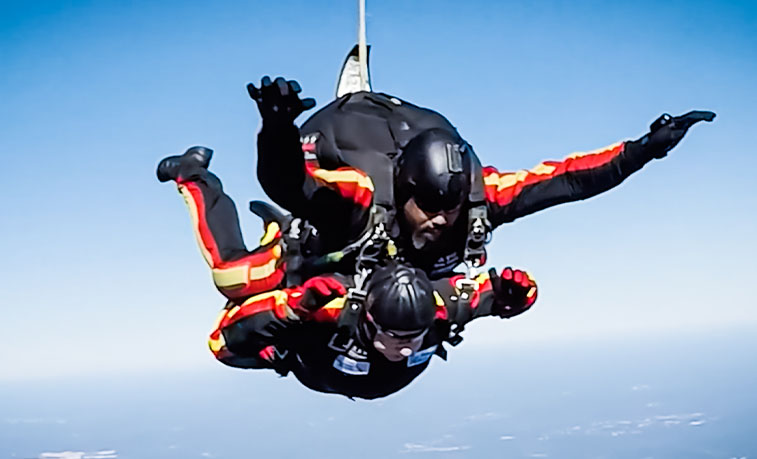 Slippery Rock University alumnus Ed Cottrell, ’43, performed a tandem skydive with Mike Elliott of All Veteran Group, Nov. 8, 2021, in North Carolina (photo courtesy of All Veteran Group). Cottrell wanted to jump before his 100th birthday, which is Jan. 17.

SLIPPERY ROCK, Pa. — Ed Cottrell plans to celebrate his 100th birthday, Jan. 17, by traveling to Florida and hitting a golf ball thousands of feet across an 18-hole course at Indian Creek Country Club. This type of activity might seem challenging for a person his age, but it will be rather sedate compared to something else he did two months earlier to mark his 100th year: Cottrell jumped 14,000 feet out of an airplane.

Cottrell, a 1943 Slippery Rock University graduate with a degree in physical education, completed a tandem skydive in Raeford, North Carolina, Nov. 8, to fulfill a promise he made to himself if he'd become a centenarian. 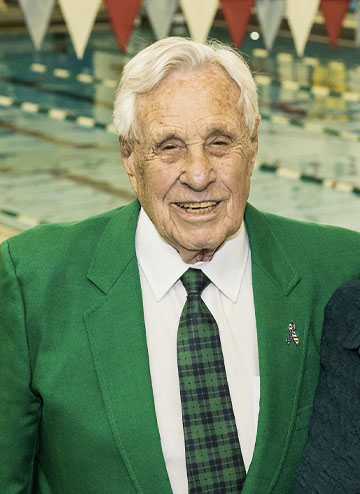 "I went skydiving when I was 90 and I enjoyed it, and I said, 'If I live to be 100, I want to do it again,'" Cottrell said. "But this time I wanted to do it in memory of a couple of my friends who were killed in World War II."

Cottrell jumped with Mike Elliott of the All Veteran Group, an organization of active and retired military parachutists that have performed more than 50,000 parachute jumps for clients that includes veterans, first responders, corporations, celebrities and politicians.

Cottrell said he chose skydiving because he was a pilot in World War II and never had the opportunity to jump out of a plane.

"Once you jump out of the plane, it's so peaceful and quiet, and I got a chance to look at the whole countryside," Cottrell said. "It just made me feel so good."

Physically, Cottrell handled his recent jump well, although he said he "landed on my feet instead of my fanny," which is not the preferred way to land as directed by Elliott. A video of the jump, produced by AVG, is available online.

Cottrell, a former lieutenant colonel in the Army Air Corps, jumped in honor of his two roommates from World War II: fellow 48th Fighter Group, 493rd Fighter Squadron members Arthur Summers and Theodore Smith. Both Summers' and Cottrell's P-47 Thunderbolt fighter aircrafts were hit during combat on Dec. 17, 1944. Summers crashed into a field and Cottrell landed safely. Smith, his other roommate, died Jan. 1, 1945. Cottrell flew in 65 missions during WWII while serving from 1942-45. He later served 28 years in the Air Force Reserves.

Cottrell earned his pilot's license when he was a student at SRU through a government program. He attended SRU mostly because his father, Elmer, was a professor of health and physical education and coach of five different sports at the University from 1923-48, and because he got to play several sports: varsity football, basketball and tennis, as well as club baseball. He also met his wife, the former Millie Weed, at SRU when they were freshmen. The couple was engaged before Cottrell left for the war during his senior year. Millie, who also graduated in 1943, passed away in 2020.

"I got a great education at (the University), I met my wife there and I have a lot of fond memories from my time there," Cottrell said. "I still keep in touch with several people there, so I'm very close to Slippery Rock."

Cottrell followed in his father's footsteps as a college coach and health and physical education professor, but he spent most of his career at West Chester University, from 1954-80, including 20 years as WCU's golf coach. During retirement, he has worked for the National Golf Foundation, promoting golf in schools around the U.S.

Cottrell, who now lives in Hendersonville, North Carolina, will be golfing on his birthday with three of his former players from WCU, Gary Daniels, Scott Vandegrift and Denny Langford, who arranged to have a private plane take the foursome to Indian Creek.

"It's amazing the number of people who make a fuss over you because you're 100, but I don't feel any different," Cottrell said.

A goal of many golfers is to shoot a score that's the same as their age, and Cottrell said he's golfed his age more than 125 times. In recent years, he typically only plays par-3 courses, but his partners agreed to let him drop his ball 130 yards from the greens on his birthday, which will equate to about 7,000 feet for 18 holes, still half the distance Cottrell dropped from the sky in November.

"It'll be like any other day for me," Cottrell said. "You get up in the morning and you're happy you're alive."

To learn more about Cottrell's story, including an account of his time in World War II, view the 2018 fall edition of The ROCK magazine. Cottrell's story begins on page 32.