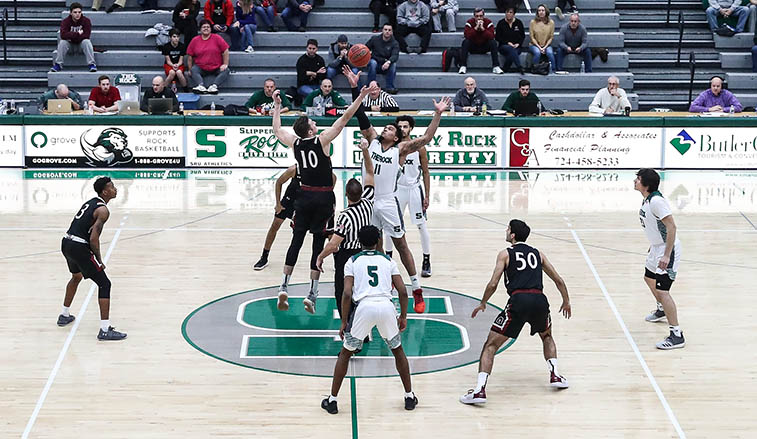 SLIPPERY ROCK, Pa. - The Slippery Rock University men's basketball team was selected as the NCAA Division II National Team of the Week in an announcement from the National Association of Basketball Coaches.

The Rock are one of five teams in the nation representing all divisions of college basketball to be honored this week, joining Ole Miss (Division 1), Wooster (Division III), Wayland Baptist (NAIA) and Iowa Lakes (NJCAA/Two-Year Colleges).

SRU earned the national team honor after running its current winning streak to eight straight games with a pair of impressive victories last week. The Rock shot 60 percent from the field and made 15 3-pointers on the road in a 95-84 win at California (Pa.) University before handing its biggest rival their first loss of the season with a 74-69 upset victory over No. 3 Indiana (Pa.) University.

SRU, under the direction of first-year acting head coach Ian Grady, is the only Pennsylvania State Athletic Conference team to be named a National Team of the Week this season.

The Rock opened the year with a 1-4 record through the first five games with all four of those losses coming by seven or fewer points and three of the losses coming by five or less points. Since then, SRU has won nine of 10 games and clicked off eight wins in a row to improve to 10-5 overall and 7-1 in PSAC games, vaulting up to first place in the PSAC Western Division.

SRU will look for its ninth straight win Dec. 16 when Clarion University visits Morrow Field House for a 7 p.m. tip.