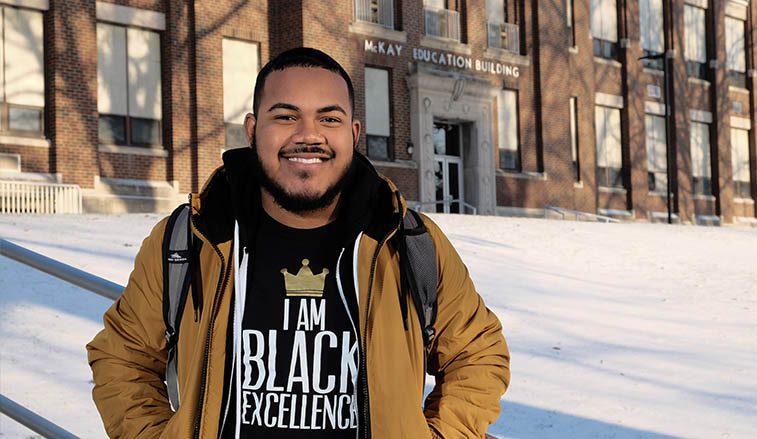 SLIPPERY ROCK, Pa. - The walk to work or class is typically a time when many people put in their earbuds, stare at their shoes or smartphones and block out the world. But a recent encounter at a Pittsburgh bus stop by a Slippery Rock University student provided an important reminder: always be aware of your surroundings. And, be ready to lend a helping hand if needed.

On the morning of Dec. 21, 2018, Antoine Stribling, a sophomore secondary education major from Pittsburgh, was waiting for a bus along Penn Avenue in Pittsburgh to take him to work. A nearby woman began screaming frantically when a man attempted to kidnap her 4-year-old son.

"She was screaming, 'Get off my son!' and no one was saying or doing anything, so I walked over and said, 'Do you know this guy?,'" Stribling said. "I really didn't know what to do; I've never been in a situation like that, but he didn't give me a problem or anything. All I did was walk over there to get him to leave. I just made sure the woman was OK. She was shaken up, so she didn't say too much, and then I was on my way."

Police were called and, after boarding his bus, Stribling took to Facebook to provide an account of what happened, including a description of the man. He also made a plea to others.

"This woman was begging for help from several people and nobody did ANYTHING to help," Stribling wrote on his Facebook page. "It took me simply walking over there to deescalate the situation (...). Please, if you see something, say something. Things could have ended differently."

One of Stribling's friends on Facebook happened to be the cousin of the 4-year-old's mother, who chose to remain unidentified. The cousin saw the post and the mother later messaged Stribling to thank him and to get more details. Although Stribling did not give an official statement to police, the perpetrator was later identified by surveillance cameras and arrested.

"When it happened, I really didn't think much of it until everyone started saying, 'Oh, you're so brave; I wouldn't have done that,'" Stribling said. "I didn't really think about it. It was just an impulse."

So what should you do if you're in a situation like Stribling's? According to Mike Simmons, SRU's University Police chief, every situation is different and should be evaluated as such.

"The two most important things are to be a good witness and call 911, or if you are on campus call 724.738.3333, or simply 3333 from a campus phone," Simmons said. "It's always best to be a witness for police and gather details about the individual, what they look like, what they are wearing and the description of any cars along with license plate numbers. If you can do something, and you feel like you can do it safely, then you should. You don't ever want to intervene when it puts your life at risk."

Stribling said he learned from the incident that, "It's always important to help people because you never know what can happen."