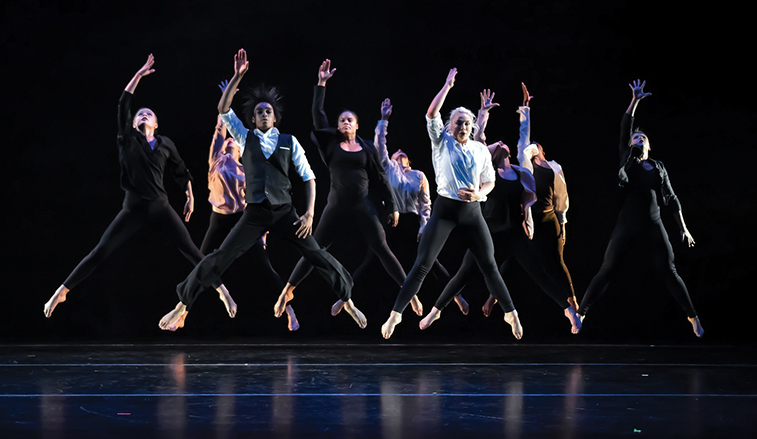 Each show will feature 14 dances. In order to showcase the variety and capacity of the dancers only four numbers will be featured in both shows.

"This is the mainstage production of the year that showcases student's choreography of excellence in regard to their creativity and performance," said Ursula Payne, professor and chair of the SRU Department of Dance.

"This show is important because many students go on to dance and choreograph at a professional level or apply to graduate school. The works showcased in these concerts are generally what they use to form their professional portfolio," Payne said.

Guest choreographer Matthew Schaffer will open the 6 p.m. show with his piece "#SociaLIEzation" that will feature a dozen SRU dance students. The piece is an exploration of social connectivity and speaks to technology's evolving effect on communication; questioning the meaning of human contact and if today's society truly allows for meaningful connections.

Schaffer attended the prestigious Orange County High School of the Arts and was a principal dancer at the world-renowned Giordano Dance Chicago Company. His credits include "Broadway Cares" with Rosie O'Donnell and "Earth to America" with Jason Alexander. Schaffer is the executive producer and co-founder of A Group Production, LLC, and his choreography has been performed by a variety of A-list stars including Ben Stiller, Rachel Platten and Rebel Wilson. Based in Los Angeles, he is the author of "So You Want to Be a Dancer."

Payne's own piece, "Mood Swings and Other Bull," will open the 2 p.m. show. The dance is a commentary on recent women's protests and examines the secrets that women keep. "We've been talking about sexual harassment - and what we've been seeing in the media with social politics - and how that impacts our relationships with one another," said Payne. "It comments on feminist ideals and deals with identity and oppression issues, as well as how women exercise independence and freedom."

Both shows will close with guest choreographer Bill Jones' "D-Man in the Waters (Part I)." Jones, with his late partner Arnie Zane, helped shape the evolution of contemporary dance with the creation and performance of more than 140 works. In 1982, the duo founded a multicultural dance company that has performed in more than 200 cities in 30 countries. In 2011, The Bill Jones/Arnie Zane Company merged with Dance Theater Workshop to form New York Live Arts. Jones serves as its artistic director.

Jones has received numerous awards during his career, including: the 2016 Washington University International Humanities Prize; a 2010 Tony Award for Best Choreography of the critically acclaimed "FELA!"; 2007 Tony and Obie awards for Best Choreography for "Spring Awakening;" and the 2005 Wexner Prize.

"D-Man in the Waters (Part I)," which was first choreographed in 1989, when the dangers of AIDS were "at a high tide," according to Jones, will feature nine student dancers. The work celebrates the spirit of the dancer Demian Acquavella, who had AIDS and died in 1990, "but swimming in its waters are many others," including Zane.

"The students did historical research on the social and political climate of the time in order to contextualize this piece," said Payne. "One of the things that people don't realize is that the student's choreography and performances have gone through a rigorous rehearsal process that is founded upon research and scholarship. All of these dances have something that the student researched in order to develop and contextualize their ideas."

The students will present their research at the SRU Symposium for Student Research, Scholarship and Creative Achievement.

For SRU students wishing to attend either performance, bus transportation has been arranged that will depart the Russel Wright Alumni House at 1 p.m. and 5 p.m. the day of the performances.

Tickets are $15 and are available at the Smith Student Center Information Desk or online at: http://www.sru.edu/offices/student-center-and-conference-services/tickets. Income generated from the performances will benefit SRU dance student activities.