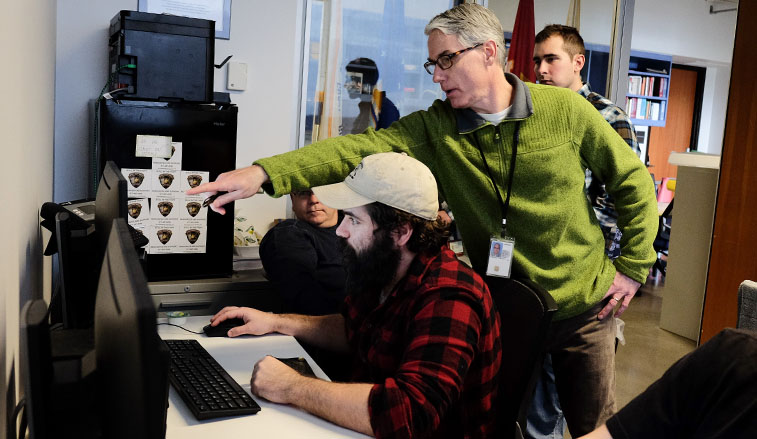 From left, Steven Pancoast, a senior exercise science major from Saint Marys, Georgia, receives guidance from Tim Morrison of the Butler VA at Slippery Rock University’s Veterans Center as part of a new initiative between SRU and the Butler VA to support SRU student-veterans.

"When they approached us, I thought it was an amazing idea because it helps our student-veterans become more likely to take advantage of services available to them," said David Wilmes, SRU associate provost for student success. "This makes a stronger partnership between SRU and the Butler VA. They are not just here to meet with our student-veterans, but the entire SRU community, to find better ways to serve our veterans."

According to the National Center for Veterans Analysis and Statistics, about 38 percent of Post-9/11 era veterans with a service-connected disability use VA health care nationwide, compared to 26 percent of other veterans. Overall, a majority of veterans are not enrolled in VA health care, including fewer enrolled Post-9/11 era veterans compared to other veterans.

"We're veterans; we're stubborn," said Logan Lantz, a senior computing major from Oil City, who served in the U.S. Navy from 2013-17 as an information systems technician. "A lot of us are older than traditional college students and we feel out of the realm and we don't like to seek help as much as we should, so it's good for student-veterans to see that people care about us."

"It can be challenging for student-veterans to get to our offices compared to offering the services on campus, because their lives are busy and many student-veterans have families and some may be working in addition to going to school," said Tim Morrison, Butler VA's vocational rehabilitation supervisor and one of the VITAL coordinators. "Many of the veterans are presenting crisis or difficult situations and they are trying to manage the academic side of things. With us seeing veterans in these situations, it made sense to connect with and provide additional support for student-veterans."

Amy Kunst, Butler VA's transition and care management case manager, cited examples in the past where SRU student-veterans had questions about health care benefits, the GI Bill, compensation and claims statuses, as well as student-veterans who were only available to come to the Butler VA for a specific time because of their busy schedules and getting an appointment was a challenge.

"We can help coordinate (support on campus) and go back to our departments," Kunst said. "If it's a service that they need to present to the VA and they can only get there (for a specific day and time), they are not just going to walk in. We can help. That doesn't happen without a conversation. Our hope is that by being on campus, people who are hesitant to walk into the VA building can still get the benefits and services that they are entitled to."

"It's just awesome to have the VA on campus working with us," said Lantz, who is president of the Student Veterans of America, SRU chapter. "It gives us another resource to be able to get the help that we need and give feedback to the VA, which can help make a difference for all the veterans on campus."

In addition to directly serving student-veterans, Morrison said that part of VITAL's purpose is to meet with and educate faculty and staff in their support of student-veterans.

Although there are similar VITAL programs across the country, Butler VA's initiative is the only such VA outreach program in Pennsylvania.

SRU has previously partnered with the VA to serve student-veterans and for public events such as the annual Salute to Military and First Responders at SRU home football games. SRU was one of the first institutions to offer a Telehealth system through the VA, which enables veterans to connect to the VA's online counseling and support programs. According to Morrison, Telehealth will be a supplement to the VITAL program but other online technology will be available for veterans to access health providers in addition to the face-to-face referrals.