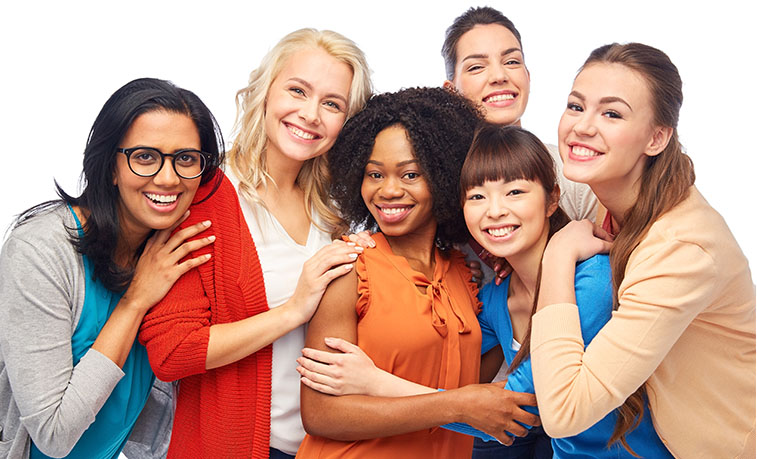 A Body Positivity photo display, consisting of volunteers posing with messages and depictions of varying body types is one of the ways Slippery Rock University is celebrating women for its Women’s History Month events.

SLIPPERY ROCK, Pa. —When it came time to select a theme for Slippery Rock University's March observance of Women's History Month, Lyosha Gorshkov, the first-year director of SRU's Women's Center, thought back to conversations he had with students during his job interview last fall.

"Students told me they still see issues with the representation of the body, and bodies that aren't considered 'typical,' and that are left out of the general social conversation about sexuality," said Gorshkov, who was hired last October to lead the Women's and PRIDE Centers in SRU's Office for Inclusive Excellence.

"There is no universal standard for being beautiful or not beautiful, and no one should be ashamed (of who they are). There's a huge movement called body positivity and when it came to plan the theme for Women's History Month, I remembered my prior conversations on campus. The main purpose is to empower those people who feel ashamed, especially those who identify as female."

With the help of Erin O'Connor, a graduate student majoring in student affairs in higher education from New Castle, the Women's Center took photos of volunteers for a public art exhibit about body positivity that will be displayed on the second floor of the Smith Student Center, March 2-16. Students, faculty and staff who participated held signs that obscured their faces and featured messages related to body image. For example, one sign read, "Loving the skin I'm in!"

Other programs throughout the month include various speakers, discussions, workshops, celebrations and more. March is designated as Women's History Month in multiple countries to correspond with International Women's Day, March 8. Women's History Month, which celebrates the contributions of women to history, culture and society, was officially observed in the U.S. for the first time in 1987, not long after President Jimmy Carter issued a presidential proclamation declaring the week of March 8 as National Women's History Week.

"I wish we could celebrate every single human being, every day and not have to designate a particular month, but it's still important to advocate for women and historically March is the month we use to acknowledge them," Gorshkov said. "There are still gaps (in our society); women are still suppressed and left behind, with issues regarding sexual assault, power and leadership. We need to send positive messages on campus that can empower women and let people know that everyone is welcome here."

In addition to the Body Positivity display, SRU's Women's History Month events include:

• Together We Rise, 6:30 p.m., March 18, SSC Ballroom: Hosted by the Women's Center, this event will focus on empowering women by getting them familiar with women-oriented student organizations on campus.

• Social Media and Women of Color, 6:30 p.m., March 19, SSC Room 321: The Women's Center and QUEENS Org, a student organization representing minority women, will cohost this workshop about the representation of women of color on social media, addressing prejudices, challenges, potential harm and prevention.

• SAFE Zone Training, 8:30 a.m. and 12:30 p.m., March 20, SSC, Room 321: SRU's Office for Inclusive Excellence, Pride Center and Women's Center will host a pair of Safe Zone training sessions to provide faculty and staff an opportunity to become an ally for those seeking to support Lesbian, Gay, Bisexual, Transgender, Questioning/Queer and Intersex students and peers. The idea is to provide a safe place to go for help, advice or just to talk to someone about sexual orientation or gender. To register, click here.

• Live Library Series: Lyosha Gorshkov, From Russia Into Exile, 12:30 p.m., March 26, SSC, Room 321: Hosted by SRU's Pride Center, Gorshkov will share his story about being queer, embracing fears, coming out, persecution, immigration and settling down in the U.S., as well as activism and public service.

• Burlesque Bash, 8 p.m., March 27, SSC Ballroom: As part of "Rock the Weekend" programming, this 1920s, speakeasy-themed party will feature costumes, casino games, a drag show, a magician, dancing and special guest Adam Eli, a queer activist and social media influencer. This event is cohosted by the Pride Center; the University Program Board; RockOUT, the student organization representing the LGBTQ community; and SOL, the Student Organization of Latinos/Hispanics and Allies.

For more information about Women's History Month events, contact the SRU Women's Center at 724.738.2992 or womenscenter@sru.edu.