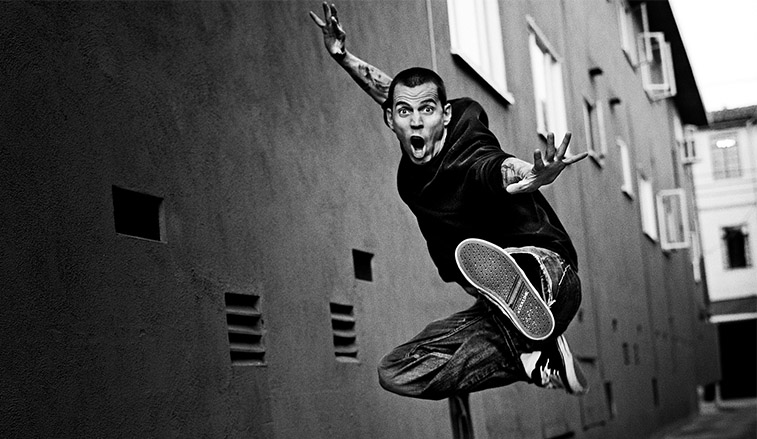 SLIPPERY ROCK, Pa. – Stephen Glover, better known by his stage name “Steve-O,” is a unique man. Born in London, he has lived in five countries, speaks three languages, holds citizenship in a trio of countries, is a New York Times-best-selling author and graduated from the Ringling Brothers and Barnum and Bailey Clown College. Oh, and he’s a “Jackass.”

And by all accounts, it’s the latter for which he is most famous, performing a variety of dangerous, crude, self-injuring stunts and pranks on the MTV reality show from 2000-02.

Now a standup comedian, Steve-O will bring his irreverent humor to Slippery Rock University for a 7:30 p.m. performance, March 2 in the Smith Student Center Ballroom.

After finishing high school in London, and completing a year at the University of Miami, Steve-O realized that the pursuit of higher education was not for him. Rather, he would enroll and graduate from clown college in hopes of furthering his goal of becoming a professional stuntman. After graduation, he began to pitch his homemade skateboarding videos – featuring dangerous stunts mixed with comedy – to Hollywood producers. His celluloid antics eventually found their way to Jeff Tremaine, co-creator of “Jackass” and the rest, as they say, is history.

Despite the show’s short run, it was a huge success that spawned “Jackass: The Movie” and led Steve-O to his own spinoff series on MTV, “Wildboyz,” that last four seasons (2003-06) on the music television network. The show featured Steve-O and Chris Pontius traveling the world to interact with the wild as well as learn native culture. Some of their antics included dressing up and running with the wild animals they encountered as the pair subjected themselves to the defense mechanisms of the animals.

In 2009 he competed on ABC’s hit show, “Dancing with The Stars,” lasting through six weeks of competition despite an injury and having virtually no dancing ability whatsoever.

Tickets for the performance are $8 for the general public and $3 for SRU students. Tickets can be purchased at the Smith Student Center Information Desk.