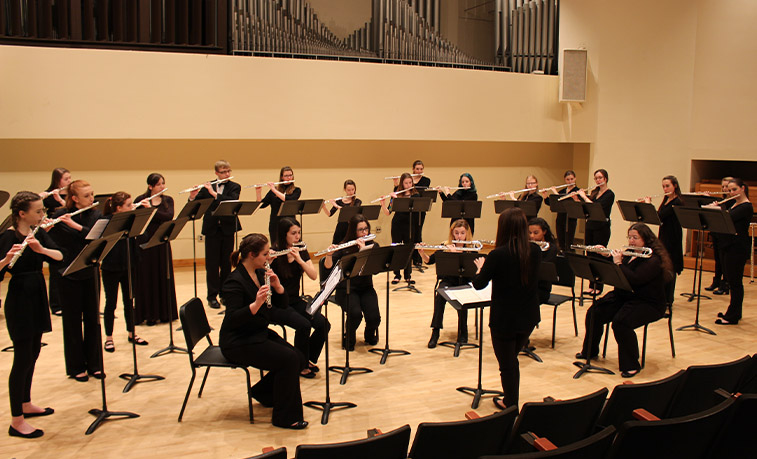 Swope Music Hall is located at 101 Central Loop, Slippery Rock, 16057, and is accessible.

Cassandra Eisenreich, SRU assistant professor of music and the coordinator of both the SRU Flute Studio and Honors Flute Ensemble, began the ensemble concert as a way to give school-aged students an opportunity to grow as musicians and for SRU students to grow as teachers and leaders.

"The experience gives these younger musicians an opportunity to come to campus, experience college life and to be immersed in an ensemble composed of a wide variety of people from different backgrounds," said Eisenreich. "We bring in great guest artists, both local and elsewhere, to provide these students an experience they may not have had otherwise."

To be considered for the program, the junior and senior high school students submitted applications and audition tapes in January. A group of judges, selected by Eisenreich, listened to each performance, grading on a rubric that accounted for accurate rhythm, smooth technique, intonation, tempo and consider their overall musicianship, including dynamics, phrasing and overall style.

Once selected for participation, students were provided with music to begin practicing with at home in preparation for group practices Feb. 22-23.

Music selections for the performance will include pieces both classical and modern, such as "The Greatest Showman" and "Don't Stop Believing." Pieces that will be premiering at the concert include "The Lovely, the Dreamers, the She," a commissioned piece by Clint Bleil, a Pittsburgh-area jazz composer, arranger and saxophonist, and a piece written for tenor and flute ensembles by Todd Goodman, a music teacher at Lincoln Park Performing Arts Charter School.

Ben Robinson, an SRU instructor of music specializing in voice, will have his work, titled "If," performed. Robinson's piece is based on the poem "If" by Rudyard Kipling, the renowned poet, journalist and novelist who wrote "The Jungle Book."

"It's so important for these students to have an outlet, and we've been so lucky with financial support for the project from the Slippery Rock Student Government Association. We are reaching music majors and the community at large to help inspire the next generation of musicians and to help them succeed," said Eisenreich.

Admission is $5 for the general public and $3 for students.