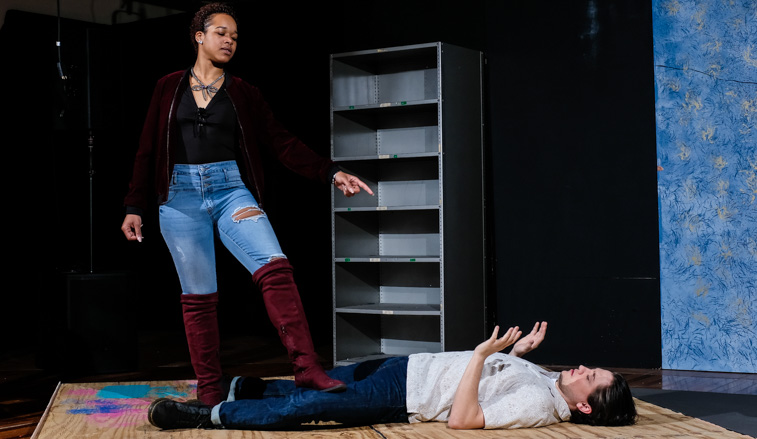 SLIPPERY ROCK, Pa. - Tajionna Anderson-Clinton transitioned from Slippery Rock University criminology major to a theatre major -- complete with a talent agent -- in about four years. But as a national finalist in an acting scholarship competition, Anderson-Clinton goes from a Catholic schoolgirl; to a narcoleptic attempting her first kiss; to Cleopatra, ruler of Egypt, in just under six minutes.

Anderson-Clinton, a senior theatre major from Pittsburgh, became the first SRU student to win the regional competition of the Kennedy Center American College Theater Festival's Irene Ryan Acting Scholarship. She outperformed nearly 250 collegiate actors from eight states to win a $500 scholarship at the Jan. 16-20 event at Indiana University of Pennsylvania.

"It feels so amazing," said Anderson-Clinton, who has participated in the regional competition the past two years. "I do feel like I deserved it because I worked really hard. I want to pursue (acting) as a career, so winning this gave me confirmation that I can do it."

Anderson-Clinton selected the scenes and monologues from plays she researched, before enlisting Tyler Hahn, a dual major in communication and theatre from Hanover, as her partner. For the monologue, Anderson-Clinton plays Elizabeth from "Catholic Schoolgirls," a fourth-grader who gives a tour of a church to kindergartners. For the scenes, Anderson-Clinton plays Linda, a narcoleptic on a date with Peter, played by Hahn, from "Almost First Kiss," before the duo plays the title characters in William Shakespeare's "Antony and Cleopatra."

Anderson-Clinton deftly transitions from one character to the next with designed segues, which, according to her, is what impresses the judges the most. One of the regional judges was Deb Docherty, president and director of Docherty Model and Talent Agency in Pittsburgh, who later interviewed and signed Anderson-Clinton.

"The Irene Ryan (competition) has a cachet to it," said Laura Smiley, SRU associate professor of theatre, who serves as an Irene Ryan respondent for other regions. "If you win an Irene Ryan, regional or national, it's a big deal. People in academia, and agents, know about the Ryans. It's a good calling card."

Now in its 46th year, the Irene Ryan Acting Scholarships provide recognition, honor and financial assistance for tuition and fees to outstanding student performers wishing to pursue further education. In addition to competing, Anderson-Clinton and Hahn will attend a workshop and master class while at the national KCACTF.

Anderson-Clinton has come a long way during her time at SRU. Although she started acting while in elementary school and attended high school at the Pittsburgh Creative and Performing Arts School, she enrolled at SRU as a criminology major. She took acting classes as electives and eventually switched majors, despite admitting that she almost failed Smiley's Fundamentals of Acting course. Her grade was determined by an audition for the Theatre Department's production of the play "Doubt, A Parable," and Anderson-Clinton left no doubt with Smiley, who cast the new major for a part.

"She has this electrifying energy that really shines on stage," said Smiley, praising how hard Anderson-Clinton looked for good material to perfect for the Irene Ryan competition. "You can learn acting or technique and you can strengthen your acting skills, but sometimes there's this special kind of magic that somebody has that can't be taught. She'll be able to have a very successful career if she keeps working and putting herself out there."

Anderson-Clinton already put herself out there for opportunities away from SRU. Admitting that she was "terrified to go outside of the school," she summoned the courage to work as an extra for the Denzel Washington movie "Fences," when it filmed in Pittsburgh; and was recently cast in New Horizon Theater's production of "Detroit '67" at the University of Pittsburgh.

"Everything happened really fast," Anderson-Clinton added. "I never said, 'If I do one thing, this will open up to another.' I just cartwheel into life and things will just come to me."