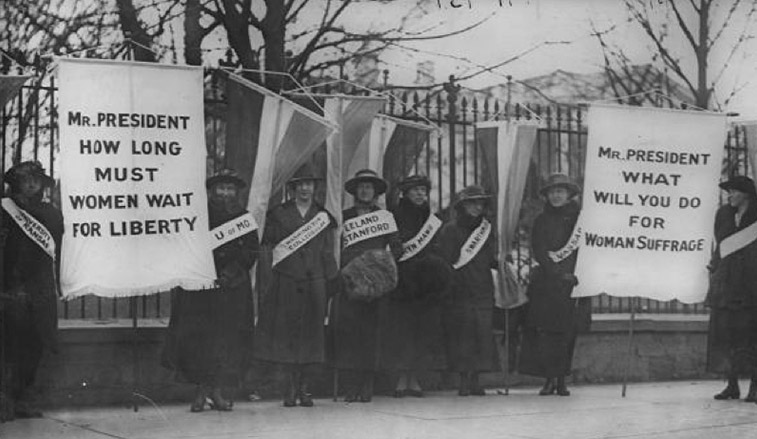 Those who picketed for the women’s suffrage movement in 1917 are among women’s contributions to society that Slippery Rock University is celebrating during Women’s History Month. The SRU Women’s Center is organizing several events and programs as well as a social media campaign to recognize women’s achievements that are lost in history.

SLIPPERY ROCK, Pa. - March is Women's History Month and Slippery Rock University is hoping that events planned throughout the month will cause a ripple effect for women to make even more history.

"Generating Waves of Empowerment" is the Women's History Month theme selected by the staff at the SRU Women's Center, a campus advocacy and resource center for women that is helping organizations across campus host and sponsor events this month that include speakers, films and celebrations.

"The Women's Center is always trying to be empowering for women through our programming all year long, whether that means giving people a voice or making them feel that they have a voice," said Jodi Solito, director of the Women's Center. "What we do is not confined to this month, but as certain populations have dedicated months for recognition, it's still important for us, as a University, to use opportunities to spotlight women and their contributions to our society that we don't normally recognize or learn about."

Each day throughout the month, the Women's Center is sharing profiles of women's contributions through the Center's Facebook, Twitter and Instagram social media pages. The social media campaign celebrates the accomplishments of women, those well-known from their coverage in history books and in the media, but also unsung accounts of women that may have been lost in history.

Women's History Month events at SRU kicked off March 6 when Hanifa Nakiryowa spoke at the Smith Student Center Ballroom. Nakiryowa, a Pittsburgh resident, was a victim of an acid attack in her native country, Uganda. She was burned with a corrosive liquid after escaping an abusive marriage. She has since founded a rehabilitation center for survivors of similar acid violence in Uganda.