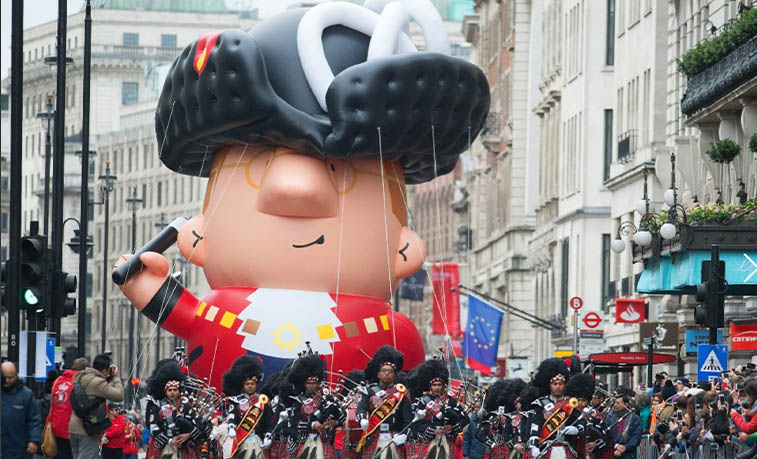 The Slippery Rock University Marching Pride has been invited to perform in the 2024 London’s New Year’s Day Parade and Festival.

SLIPPERY ROCK, Pa. — London came calling on Slippery Rock University, and it was a complete surprise to members of SRU's marching band, the Marching Pride. What band members were told was an informational meeting in the Swope Music Hall with a guest speaker was actually a special reveal, that the Marching Pride has been selected to perform in the 2024 London's New Year's Day Parade and Festival. The parade happens each year in front of a half million spectators on the streets of London, England, and tens of millions of television viewers.

Bob Bone, founder and chairman of the LNYDP; Steve Summers, chair of the London Mayors' Association; and Bill Northen, LNYDP senior director of international participation, were among the representatives scheduled to visit SRU Monday, but their flight was delayed. Instead, Jonathan Helmick, associate professor of music and director of the Marching Pride, delivered the news after playing a promotional video clip produced by the LNYDP.

"Folks, we're going to London," Helmick said before band members erupted with cheers. "It's honor to represent the University, out state and our country. We're excited to bring The Rock to London."

"I just kept thinking, 'Where are we going?'," said Allesandra Germ, a junior music education major from Gibsonia, who is one of the drum majors. "I knew we we're going somewhere; I just didn't know where. I'm super excited and I've always loved the thought of travel and going to different countries. This is a great opportunity."

The LNYDP, which first took place in 1987, attracts more than 10,000 participants each year from the United Kingdom, U.S. and Europe. Approximately 20 marching bands from the U.S. are selected each year to perform.

LNYDP officials contacted SRU's Music Department last year about the opportunity and selected the Marching Pride to perform based on recommendations from talent scouts after the band performed at the 2019 St. Patrick's Day Festival in Dublin, Ireland. The Marching Pride captured the 2019 event's "Best Adult Band" and "Best Overall Band" parade awards.

"We've heard about the Ireland trip, but that happened before I came (to SRU), and I wish I would've have been able to be part of that but I was in high school," said Isaiah Greenawalt, a senior music education major from Ruffs Dale, who is a drum major. "I'm so excited because I haven't had the chance to do any trips at all because of (the COVID pandemic) since I've been in college."

"Receiving this invitation really shows that SRU and our Music Department have an international reputation," Helmick said. "We often talk about offering transformative experiences, like when we went to Ireland, and that was incredible, just seeing how much pride our students have in their University and representing their country. Because almost all of the students who will perform in 2024 weren't here in 2019, these kinds of experiences for our students are once in a lifetime. It changes them for the better by connecting them to the world."

The LNYDP parade route passes through Piccadilly, Regents Street, Pall Mall, Trafalgar Square and Whitehall in the center of London. The event is televised by multiple networks and streaming services, including the Public Broadcasting Service in the U.S.

Students who are Marching Pride members during the 2023-24 academic year will travel to London for the LNYDP. There are currently more than 160 members of the Marching Pride.