Hoping to build on that strong foundation, organizers have set a goal of doubling the number of donors participating during this year's March 26 Giving Day initiative. The day coincides with SRU's Founders' Day, the 129th anniversary of the founding of the University. Supporters hope SRU alumni, friends and current faculty, staff and students will make a "birthday gift" to the University March 26 through the SRU Foundation, Inc. website at https://raise.sru.edu/give. 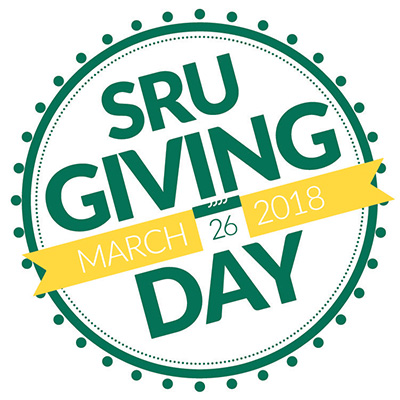 "This type of Giving Day has really taken off," said Erin Bryer, assistant director of development, annual giving for the SRU Foundation. "More people are preferring to give online and they know their money could be used the very next day. It's an opportunity for people to make an instant impact."

According to Bryer, the Foundation "tested the waters" during last year's inaugural Giving Day and the event tripled its modest goal to support various areas across campus, including athletics, scholarships, student organizations and musical ensembles. This year, the Foundation has partnered with several campus groups, such as student organizations and varsity athletics, to spread the word about Giving Day to their email lists and followers on social media, using the hashtag #RaisetheRock.

"This is a way for us to tell alumni what is going on at SRU and what they could support in a really concise way," Bryer said. "Giving Day is the Rock Family coming together to support the next generation of Rock alumni and making sure students know there's this larger community of people out there who were once where they are now."

While completing the secure, online donation form, Giving Day participants can designate which area of campus their gift will support, such as the Slippery Rock Student Government Association, specific programs or any of the academic departments. Scholarships are particularly critical to student success, as 85 percent of SRU students rely on scholarships and grants to help defray the costs of attending the University.

Only donations collected through 11:59 p.m., March 26 will count toward the Giving Day goal of 268 donors.

"We want to double our donors and double the impact," Bryer added.