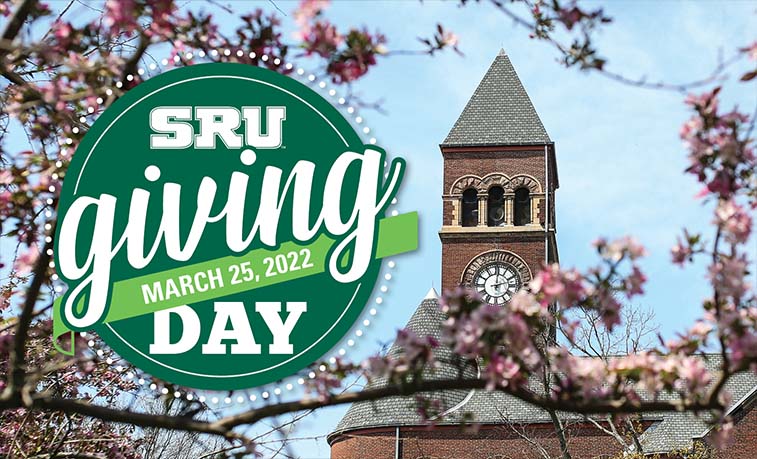 SLIPPERY ROCK, Pa. — Thanks to generous support from alumni and the campus community, Giving Day at Slippery Rock University keeps getting bigger and better every year since the University started the annual fundraising event in 2017. For the sixth annual Giving Day, March 25, the goal is to raise $500,000, a number that might have seemed unattainable in previous years.

"Giving Day helps meet the needs of our students," said Marissa Cozza, assistant director of annual giving and donor communication. "There's been more awareness and, especially with everyone back on campus (after two years of being remote during the pandemic), there's more excitement around Giving Day. It's a great way to celebrate the University."

Giving Day is scheduled each year to coincide with Founders' Day, marking the anniversary of the first day SRU opened its doors for classes on March 26, 1889. Because Founders' Day is on a weekend this year, Giving Day will be a day earlier, March 25.

This year, organizers are emphasizing the Give Greater Match, as all donations, no matter the area of campus it supports, will be matched dollar-for-dollar up to $300,000 to support student scholarships at SRU, thanks to an anonymous donor.

"This is a great incentive for people to give," Cozza said. "Members of Rock Nation have proven again and again that they are generous and determined to help students."

Last year's Giving Day resulted in more than $320,000 in gifts, and while increasing the total by more than half that amount in 2022 might seem ambitious, the Giving Day totals have increased year-over-year by an average of $75,000 since the inaugural campaign.

People can make online contributions from SRU's Giving Day webpage, givingday.sru.edu, now through 11:59 p.m., March 25. When completing the online donation form, people can designate their gift to any area on campus they would like to support.

Donors can also create a profile on the Giving Day website and become an "Advocate," which allows participants to track the number of clicks, gifts and dollars that they personally generated for the campaign. Advocates can also create challenges and matches, as well as Personal Pleas, which are short videos explaining why they give and encouraging others join them in supporting the campaign.

Finally, academic group challenges supported by the Foundation includes $1,000 awarded to the group that raises the most total money, followed by $500 for second place and $250 for third place.

SRU leadership is also conducting a challenge. Members of the president's cabinet and provost's council will contribute a combined $20,000 to student scholarships once the Giving Day campaign reaches $100,000.

There are more than 80 initiatives and groups created in the Giving Day platform that donors can support. More information about Giving Day and groups and initiatives to support is available on the campaign webpage.

Participants are encouraged to use the hashtag #SRUGivingDay on social media and share stories about why they give or spread awareness about SRU programs, organizations and projects.

More information about Giving Day is available on the Giving Day webpage or by emailing questions to advancement@sru.edu.