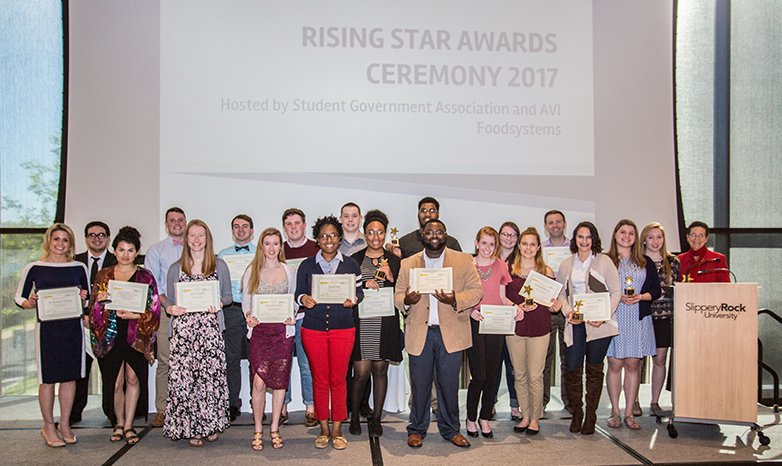 Slippery Rock University students, faculty and staff pose after being named winners of a variety of awards at the 2017 Rising Star Awards Ceremony. The awards, sponsored by AVI Fresh, the University's contract food vendor, are presented to students that influence positive change, inspire peers and to faculty and professional staff that effectively delegate, communicate and empower student club and organization members.

AVI Fresh initiated the awards and sponsors the event that includes the presentation of 10 Rising Star Awards, including:

• Silent Inspiration Award (one award)
Awarded to the student who has served his or her organization in an unassuming and quiet manner. This award is presented to a student who has not yet had a leadership role, but through a commitment of time and energy, has made an impact on the organization and the University community.

• Student Community Service Award (one award)
Awarded to the student who makes service a priority. The student will have made an impact on an organization, community or agency serving as a positive role model while boosting courage, spirit and hope in other individuals.

• Student Leader of the Year Award (one award)
Awarded to the student recognized by peers as being especially dedicated to scholastic and extracurricular activities. The student will have made outstanding contributions to campuswide co-curricular programs, as well as providing high-quality leadership and organizational ability in helping plan and present programs.

• Rising Star Award (seven awards)
Awarded to students that influence positive change and inspire peers, faculty and professional staff, while effectively delegating, communicating and empowering an organization's members. These students balance academic life with leadership opportunities and stand out within the organization.

Winners of Rising Star and individual awards are selected by AVI Fresh, based upon submitted nominations, and will receive a certificate of achievement as well as have a star named after them in the International Star Registry.

• Club Adviser of the Year Award (one award)
Awarded to an adviser who went above and beyond the requirements of the position and is deemed to have provided consistent service and guidance to students in his/her organization while serving as a role model. He/she reflects the University's vision of being a community that educates students to be leaders in a global society.

• Exceptional Service to Students, Staff & Faculty Award (two awards)
Presented to those faculty or staff members who have exceptional commitment to student learning outside of the classroom, have given of their time apart from office hours and job requirements, and have dramatically influenced the lives of students in a positive way. The persons show commitment and devotion to mentoring and caring for students; give consistent and extraordinary guidance and professional support; provide special attention and mentoring to others regardless of status or setting.

Lastly, nearly a dozen awards will be handed out to recognize outstanding organizations and programming, including:

• Outstanding Greek Organization Award
This award recognizes a Greek-lettered organization that has positively influenced Slippery Rock University and the greater community through exceptional programming, leadership, activities, goal attainment, philanthropic support and the development of positive visions for the future.

• Student Organization of the Year Award
This award recognizes a student organization that has positively influenced SRU and the greater community through exceptional programming, leadership, activities, goal attainments and development of positive visions for the future. The winning organization must have demonstrated its commitment to the University and organization's missions.

• Living Learning Community of the Year
This award recognizes an organization that has positively influenced SRU and the greater community through exceptional programming, leadership, activities, goal attainments and development of positive visions for the future.

• Cultural Event
Awarded to the event that demonstrated leadership in increasing cultural awareness within the campus, thereby enabling students to appreciate the diversity within our society.

• Collaborative Event
This award recognizes the teamwork and collaboration of two or more groups/organizations to achieve a common goal.

• Educational Event
Awarded to the event that increases attendees' knowledge about a specific topic, concept or idea.

• Entertainment Event
Awarded to the event that had a positive impact on the University and community for the purpose of providing a fun and entertaining atmosphere.

• Service Event
Awarded to the event organized to increase the knowledge of, and opportunity for, participation in community service for SRU students.

• Fundraising Event
Awarded to the club or organization that brought in more money than that which was provided for by its Student Government Association budget.

• Greek Organization Event
Awarded to the Greek organization that sponsored and marketed a social or educational event to SRU and the community.

• Residence Life Event
Recognizing an event coordinated by students within the Residence Life Community that promoted and enhanced student development as responsible community members in a fun, social and educational environment.

Winners of group awards will be selected by a committee comprised of University faculty, staff and students.

Nomination forms are available on CORE, with additional information available by contacting Courtney Mullins at: crm1018@sru.edu.