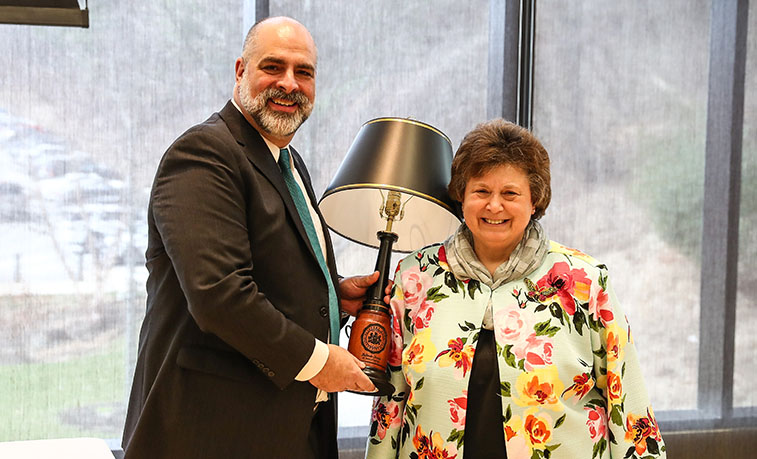 SLIPPERY ROCK, Pa. — Since Lalanda Stromp joined Slippery Rock University in 1974, two things have remained consistent: SRU's culture of caring and its commitment to its students.

"What an exciting journey to have the support I've received over the years from faculty and staff but working with our marvelous students is what makes it all worthwhile," Stromp said following the University's annual Employee Service Recognition ceremony.

Stromp, an assistant professor of hospitality, event management and tourism, along with 108 colleagues were honored for their combined 1,870 years of service to the University at an April 2 ceremony in the Smith Student Center Ballroom.

"This recognition is a nice feeling, and to have so many people recognized (for milestones shows) that this is a great place to work. I hope people realized how fortunate we are to work at Slippery Rock University. There's always ups and downs, but isn't that life? I count my blessings every day," she said.

Stromp, who will retire later this year, was gifted a lamp from the University and other employees with milestone were awarded pins and plaques.

SRU President William Behre, who served as host for the event, told the audience, "Our students bring us together, but our faculty and staff fulfill our mission to educate and guide our students. The relationships our faculty and staff build and the teamwork we show are the cornerstone to the success of the University. This ceremony is just one way that we thank our employees for their dedication to our institution."

As part of the ceremonies, Patti Doyle, purchasing agent, and Catherine Massey, professor of psychology, were presented President's Awards for Outstanding Service. In addition to a plaque, each honoree was awarded $1,000.

The following SRU employees were recognized with milestone awards: