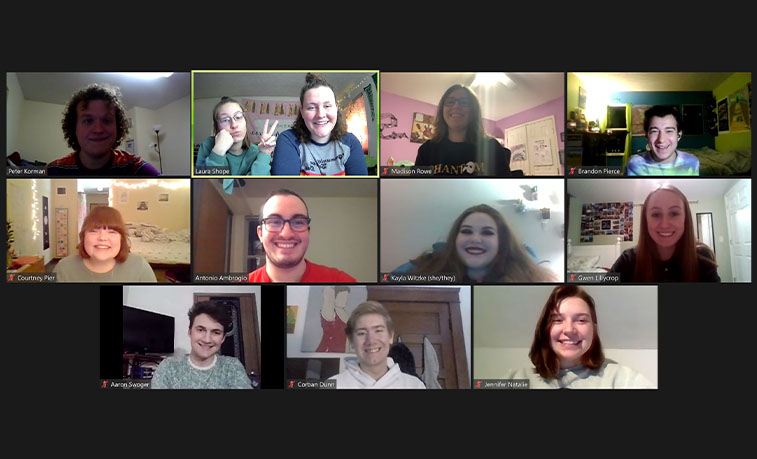 The Musical Theatre Society at Slippery Rock University is performing the musical, “The Theory of Relativity,” which will be streamed online April 15-17. Tickets can be purchased through the website showtix4u.com.

SLIPPERY ROCK, Pa. — It doesn't take a modern-day Albert Einstein to understand the timeliness or gravity of "The Theory of Relativity," which is the title of a musical that will be performed by the Musical Theatre Society at Slippery Rock University and streamed online, April 15-17. The student-run organization's annual musical, written by composer Neil Bartram and based on the book by author Brian Hill, will be performed virtually and the theme is directly related to what most college students are encountering during the COVID-19 pandemic.

"This is not like a normal musical that follows a cast of characters through a plot; it's a bunch of individual stories and each character has their own song, monologue or moment," said Laura Shope, a senior theatre major from Venetia, who is the president of MTS and director of the musical. "Each story, however, is related to a common theme, which is what it means to be connected to other people, influencing somebody else's life, adapting to change and ambiguity and all kinds of things that young adults face in their daily lives." 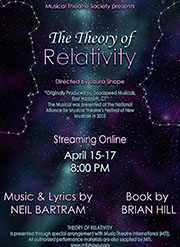 For example, Madison Rowe, a freshman business major from Gibsonia, performs a monologue that is set in a nail salon and the character she plays tells her manicurist about people she knows, both personally or in passing, who are not present but are portrayed elsewhere in the show. Another character also opens doors with her elbows because she's afraid of germs.

"In the age of COVID, with all the disconnection of people being so far apart from each other and not being able to be with the people in their lives, it seemed like a really apt musical for our current time," Shope said.

Fourteen students from MTS, including 11 cast members, are participating in the production. People can purchase tickets through the website ShowTix4U and watch a recording of the musical online at 8 p.m. on April 15, 16 or 17. Cost is $12.04 for the general public per viewing and $7.21 for SRU students per viewing.

Typically, MTS does either two cabarets per semester or one large-scale musical production. During the pandemic they've done smaller-scale performances on social media, but "The Theory of Relativity" is MTS's main production for the spring semester.

"This is so much different from anything we've ever done before," Shope said. "It's really awesome how the students have adapted so well to this online format, and they're just being resilient and good sports about what we're doing in the performing arts, and we're all excited about this production."

Shope credits the hard work of all the MTS members and the organization's faculty adviser, Glenn Utsch, assistant professor of music, for helping navigate the online licensing requirements and for all the behind-the-scene activities it takes to complete a virtual musical production.

In addition to Shope and Rowe, SRU student participants include: