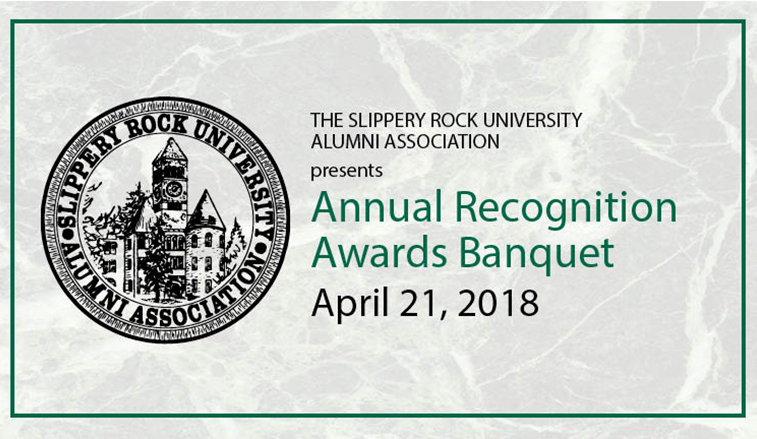 SLIPPERY ROCK, Pa. - The Slippery Rock University Alumni Association will add four names to its distinguished Recent Alumni Award recipient list at its 5 p.m., April 21, annual recognition and awards banquet at the Russell Wright Alumni House. The association will also honor a number of students with awards and scholarships.

Recent alumni being recognized this year are:

The awards were created in 2005 by the SRU Alumni Association to recognize alumni that have demonstrated professional and personal accomplishments. Alumni are nominated by alumni, faculty and staff.

Those nominated for the honor must be a graduate of SRU with a bachelor's, master's or doctorate degree, and who have graduated within 10 years of the award's presentation. 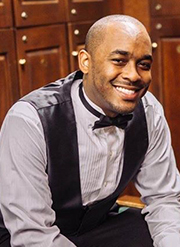 Brown is a renowned presenter, author and critically acclaimed speaker who has devoted his life to educating campus communities, businesses and society about cultural awareness. After graduating from SRU, He earned a master's degree in student affairs from Indiana University of Pennsylvania. He currently works in residence life and housing services at West Chester University. At WCU, Brown works with first-year students and supervises student leaders. While at SRU, Brown created a program known as the Diversity Awareness Program. The program aims to encourage and facilitate diversity and cultural unity in all areas of life among students, faculty and staff on university campuses. Since DAPs launch in 2007, Brown has presented the program at more than 300 colleges and universities from coast to coast. He has been honored with the National Best of Mid-Atlantic Region 2 Conference Presenters (2016); People of Distinction Humanitarian Award (2016); MACUHO Best Presentation (2014, 2016); and took second place at the Business Idea Competition (2016). In 2017, he was featured in "Diverse Issues in Higher Education Magazine" following publication of his first book, "Ugh!?! Not Another Diversity Book!" Brown has returned to SRU numerous times to speak with student groups about diversity and leadership. 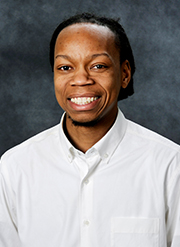 McNair is a 2011 graduate with a dual major in marketing and nonprofit management. The former Heinz Fellow, who by his own admission spent a lot of his youth in and out of trouble, has launched his own nonprofit agency, 1Nation. 1Nation seeks to provide mentorship to African-American males throughout western Pennsylvania's underserved communities in the areas of academic advancement and personal development, while

providing the tools needed to combat those conditions that would otherwise undermine the efforts of those young men to be successful. As the co-founder and executive director for 1Nation, McNair has witnessed increases in attendance, grade improvements, decreased suspensions and increased matriculation for the students 1Nation has helped throughout Allegheny County. 1Nation's success has garnered McNair a Jefferson Award for Public Service from The Jefferson Awards Foundation, a nonprofit organization that "recognizes, inspires and activates volunteerism and public service in communities, workplaces and schools across America." The Foundation was started in 1972 by Jacqueline Kennedy Onassis, U.S. Senator Robert Taft and Sam Beard. McNair has also been the recipient of the National BME: Community Genius Award; the Pittsburgh Courier 2016 Fabulous 40 Under 40 award; and the 2017 Pittsburgh Public School We Promise Champion Award. The Pittsburgh Foundation recently awarded 1Nation a $13,000 grant through its "Small and Mighty" program. The Pittsburgh Foundation launched the Small and Mighty grants program in 2016 in an effort to bridge the gap between our grant-making and the neighborhood-based nonprofits that work to better the region. The Small and Mighty grants program is part of the Foundation's "100 Percent Pittsburgh" organizing principle, which seeks to ensure that Pittsburgh residents who live at or near the federal poverty line have access to opportunities for participation in the region's revitalized economy. 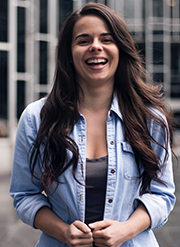 McKinney is the social media manager at Point Park University where she is responsible for managing the university's Facebook, Twitter, Instagram, Snapchat, LinkedIn and YouTube accounts. In two years, she has increased the institution's Twitter followers by 23 percent, Facebook followers by 25 percent and Instagram followers by 84 percent. Her work on PPU's Instagram account was rewarded with a 2016 Educational Digital Marketing Gold Award. She also won PPU's 2017 "Striving to Achieve Remarkable Service" Award. At PPU, McKinney also teaches a freshman orientation course and serves as a mentor to the women's golf team. Utilized as a social media expert by WPXI for their coverage of the Pittsburgh Steelers players' social media behavior in 2017, McKinney was also a contributor to the textbook, "Complex Cases in Student Affairs: Preparing Early Career Professionals for the Practice." In addition to her position at PPU, McKinney also does freelance social media work for the YWCA of Greater Pittsburgh and the Pittsburgh Parks Conservancy among others. She has returned to SRU to consult with the Counseling and Development Department on branding, growing an audience and increasing recruitment through social media. 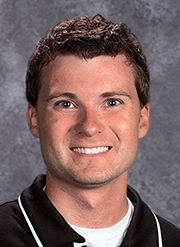 Vannoy, after graduating from SRU, began teaching in the Farrell Area School District where he taught middle and high school social studies while also serving as the district's athletic director. As AD, Vannoy supervised and evaluated 11 varsity, eight middle school and eight elementary school head coaches, an assistant athletic director, an athletic trainer and numerous assistant coaches. Following a six-year stay, he moved to Moniteau High School for two years, teaching world history and geography, driver's education and advanced placement U.S. and European history. He is currently the assistant principal at Sharon Middle/High School. Vannoy has coached middle school, junior varsity and varsity girl's volleyball; middle school and varsity track and field; and middle school cross country. He has served on the boards of numerous community agencies, including The Mercer County Hall of Fame board of directors; the Community Advisory Board for the Sharon Herald; served as a representative for the Mercer County Council of Governments Regional Planning Commission; the Sharon Library Authority; and the Sharon Street Authority. Vannoy has also made a variety of professional presentations including "Teaching with Primary Sources" at a Gilder Lehrman American History Seminar and the "Careers in Education" event at SRU. He also participates in SRU's "Backpacks to Briefcases" event and serves on the Teacher Education Advisory Council. 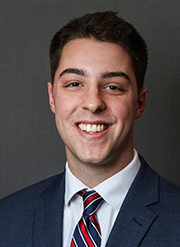 Heffelfinger will receive the Outstanding Senior Man Award for "excelling in the classroom and in extracurricular activities."

A student researcher, Heffelfinger has worked alongside Qi Chen, assistant professor of chemistry, to design and synthesize L-Neplanocin analogues as antiviral agents. In doing so, the pair have explored, modified and designed organic/synthetic pathways regarding nucleoside analogues and their drug action mechanisms. They have presented their research at the SRU Symposium for Student Research (March 2017) and the National Honors Collegiate Conference in Atlanta (November 2017).

Heffelfinger, an Honors Program student, is involved with a variety of extracurricular activities on campus, including: Pre-Med Club where he organized and managed fundraising for the club's St. Jude "Up 'til 2" team and served as a mentor to guide younger students through the undergraduate and medical application process; has traveled to Antigua and Barbuda, West Indies, to experience the challenges of health care in the Caribbean; and serves as a senator on the Slippery Rock Student Government Association.

He has years of volunteer experience with the Institute for Hand & Upper Extremity Rehabilitation in Allentown, where he developed a 160-exercise Home Therapy Program, which is customizable and prescribed to patients by registered/licensed occupational therapists. He has volunteered at Byrd Sports Performance & CoreXcell Sports Training where he supervised youth sport training programs to ensure safe and effective exercise training. He was a pediatric rehabilitation volunteer with St. Luke's Health Network in Bethlehem where he assisted in an outpatient, pediatric rehabilitation facility for motor, speech and miscellaneous therapies. Following graduation, he plans to pursue a Doctor of Osteopathic Medicine degree at Nova Southeastern University's Dr. Kiran C. Patel College of Osteopathic Medicine in Fort Lauderdale, Florida. 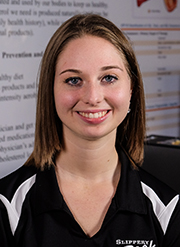 Walsh, the recipient of the Outstanding Senior Woman Award, has achieved recognition in the areas of scholarship, service and research. As a freshman, she received the Gary S. Pechar Award, bookending it with the Exercise and Rehabilitative Sciences Department "Outstanding Graduating Senior Award." A 4.0 GPA student, Walsh was a FYRST Seminar peer leader for three years and has served as an Honors Program mentor, Orientation Ambassador and the first Advanced Exercise Physiology lab assistant.

She has served SRU through facilitating events for prospective students, including "Girls Rock at STEM" and numerous Saturday Showcases. She is a certified yoga instructor and has taught classes at a variety of on-campus functions such as SRU's "Stress Less" event. Walsh is one of two SRU students who received Summer Undergraduate Research Experience grants to study the effects that exercise has on inter-arm blood pressure difference, or "ISBPD." Walsh's specific area of research involves the response to exercise for people who have ISBPD at rest. The research was also funded by faculty student research grants, state grants and a technology grant through SRU's College of Health, Environment and Science.

Walsh is completing an internship at the University of Northern Colorado's Cancer Rehabilitation Institute, working with cancer survivors to implement exercise interventions to mitigate the side effects of cancer and cancer treatments. This fall, she will being pursuing a master's degree in health and exercise science at Colorado State University where she has received a fully-funded teaching assistantship.