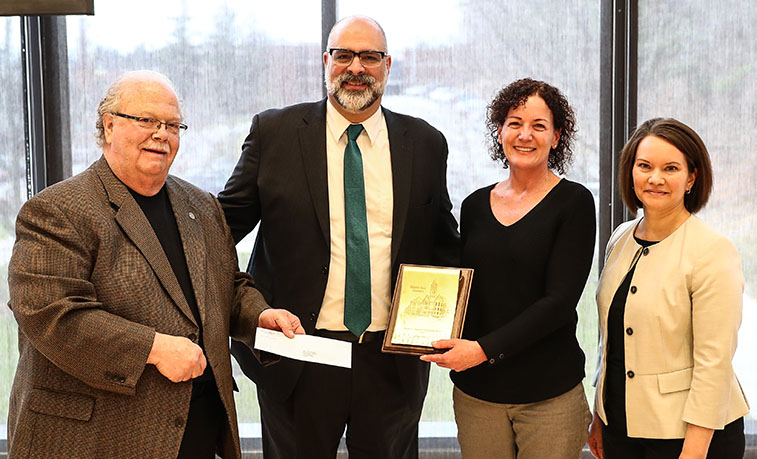 SLIPPERY ROCK, Pa. — Patti Doyle doesn't offer many words to describe her dedicated service to Slippery Rock University or the fact it often goes beyond expectations. Then again, she doesn't have to - she lets her work speak for itself.

One can get a sense of the kind of employee Doyle is by reading the framed signs on her office wall: "Work Hard & Be Nice," "Hustle & Heart" and "Be Awesome Today." All three were gifts from her daughter, Alison, and Doyle says they help to serve as daily reminders of how to approach her work.

Doyle, a purchasing agent in SRU's Contracts and Purchasing Office, and Catherine Massey, professor of psychology, were recipients of the 2019 President's Awards for Outstanding Service, which were presented at a ceremony, April 2, along with a $1,000 award. Established in 1981 and funded by SRU supporters, the late Donna and Robert McMullen, '51, the award recognizes extraordinary commitment to University service and citizenship beyond the scope of an SRU employee's job function as demonstrated through active participation in on and off campus activities that benefit the University. Doug McMullen, chair of the SRU Foundation, Inc., and his wife Linda continue to sponsor the award.

"Patti is diligent, proactive and attentive to every detail in her work," said Molly Mercer, interim chief financial officer, who along with McMullen's son, Doug, and SRU President Bill Behre presented the award to Doyle. "She strives each day to meet the needs of the campus community and she truly cares about her customers."

Doyle has worked in the Contracts and Purchasing Office since 1988, overseeing the workflow of the office, which is responsible for processing purchase orders for supplies and equipment and reviewing the University's contacts that range from campus speakers and performers to service contracts for equipment maintenance.

"It's honor to be selected," Doyle said. "I'm very appreciative to my supervisors who took the time to nominate me. I never expected anything like this and it's nice to know that my hard work and dedication hasn't gone unnoticed."

University vice presidents collect and evaluate nominations for the award from their respective areas, including a review with the nominee's supervisor, before nominations are forwarded to members of the President's Cabinet who select the winner. 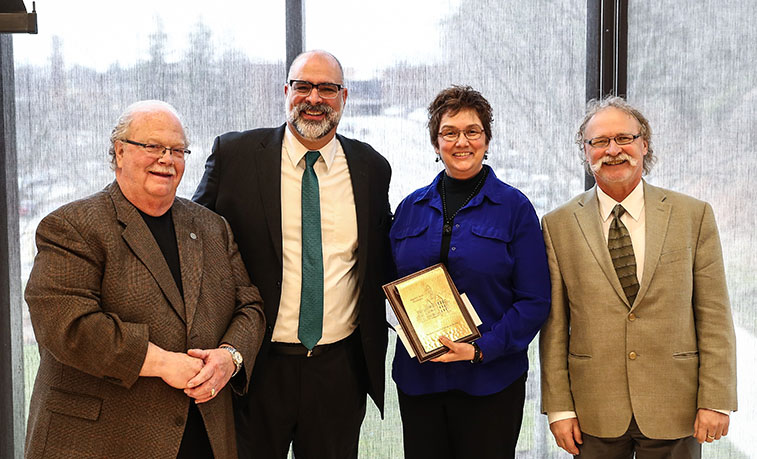 Massey is also the adviser for RockOUT, the student LQBTQI and ally organization at SRU, and is the chapter coordinator for Silent Witness Peacekeepers Alliance, an organization of gay and straight allies dedicated to providing a non-confrontational buffer between the lesbian/gay/bisexual/transgender community and those who would protest LGBT events.

She has also developed and coordinated other events and trainings, like the University's Safe Zone program, to create a culture of inclusion on campus.

"Dr. Massey engages with passionate focus with the goal of making a positive impact on those around her, helping to promote the ideals of social justice for all," wrote Jennifer Sanftner McGraw, professor of psychology, in her nomination of Massey.

"Service is one of the most rewarding aspects of being a faculty member," said Massey, who has served on a variety of committees, including chair of the Departmental Curriculum Committee. "Since day one, I've always been involved with service to the University, the department, students and other faculty members. The intrinsic reward of doing this work on campus and knowing that others appreciate and recognize that I have made a difference, makes this award truly an honor to receive."