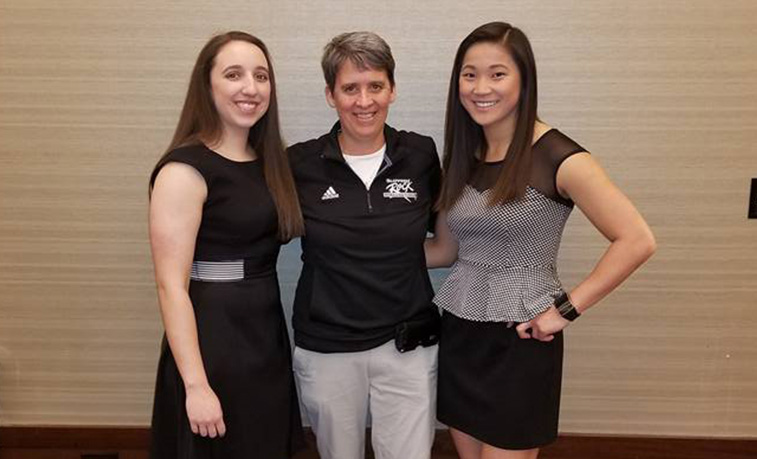 SLIPPERY ROCK, Pa. — Joanne Leight knows how important it is for faculty to serve as one-on-one mentors for students and how that relationship impacts their role as academic advisers. As a Slippery Rock University professor of physical and health education and department chair, Leight guides anywhere from 20-40 students each academic year through the advising process.

"Advising is important because the students need help understanding class registration, clearances and the overall process," Leight said. "You sit down with them and ask what their goals are and figure out how to get them to that point by taking certain classes in a certain order and in a certain time. You're able to ease their minds by mapping that out and they leave feeling a whole lot better."

"Our faculty's dedication to teaching, advising and their scholarly and creative work are the fabric of our University and raise the quality of education we provide our students," said Bill Behre, SRU president. "It's important that we honor the achievements of our faculty, especially when they are recognized by students, colleagues and other individuals who benefit from their great work."

Leight credits her success as an academic adviser to the influence of mentors when she was an SRU student in the mid-1980s. Leight graduated from SRU in 1987 with a degree in health and physical education thanks in part to her adviser at the time, former SRU professor Bobbie Braden.

"I had a really good role model," said Leight, who wound up working alongside Braden when Leight was hired at SRU in 1996. "Having someone who made me accountable and told me that I could do whatever I wanted to do in my career (was influential). Then, being able to be a colleague of hers was a highlight of mine."

Leight said there's no secret to becoming a good academic adviser and that time spent advising is just as important as teaching.

"It can be hard sometimes to carve out the time, but it's a necessity and it can be easily overlooked, especially with younger faculty who are stretched in many places with scholarship, teaching and service," Leight said. "Advising falls under teaching effectiveness. I love the one-on-one with students; you learn what they are going through and what their goals are, and it's nice to see them down the road achieve their goals. I love my role as an adviser."

After students' nominations were collected for the award, an awards committee organized through the Provost's Office selected finalists and the president selected the recipient based on the committee's recommendation.

"It's humbling because this is a student-nominated award and the students are why we do what we do," Leight said. "Students come first and the the best part of my job is helping the students."