SLIPPERY ROCK, Pa. -Louise Lawrence-Israëls, who as a child went into hiding from the Nazis, will replace Gideon Frieder as the guest speaker at Slippery Rock University's annual Holocaust Memorial Program.

Frieder is unable to make the trip to SRU due to illness. Lawrence-Israëls will speak in his place, 3:30-5 p.m., April 17 in the Advanced Technology and Science Building, Room 142.

Frieder and Lawrence-Israëls are two of the nearly 80 survivors who share their message as volunteers through the United States Holocaust Memorial Museum. An estimated 100,000 Holocaust survivors are alive today. 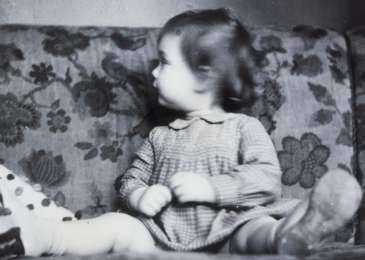 Lawrence-Israëls in hiding in the Netherlands, circa 1942.
Photo courtesy of U.S. Holocaust Memorial Museum.

Less than a year after Lawrence-Israëls was born in 1942 in Haarlem, the Netherlands, Nazis ordered her family to move to Amsterdam, where, under anti-Semitic laws, many Jews were deported to extermination camps in Auschwitz and Sobibor. While in Amsterdam the family hid in a top floor apartment with false identification papers. Two and a half years later, Canadian forces liberated Amsterdam and the Israëls retreated to Sweden before eventually returning to the Netherlands in 1948.

Lawrence-Israëls earned a degree in physical therapy in the Netherlands, and in 1965 she married Sidney Lawrence, an American medical student in Amsterdam. They moved to the U.S. in 1967. After her husband retired from the U.S. military in 1994, the couple settled in Bethesda, Maryland.

Frieder will speak to 200 students in the Slippery Rock Area School District the morning of April 17.

The event at SRU is part of the University's Holocaust Memorial Program, which was started by Richard Martin, a now retired political science professor, to host speaking events and other programming to remember the Holocaust.