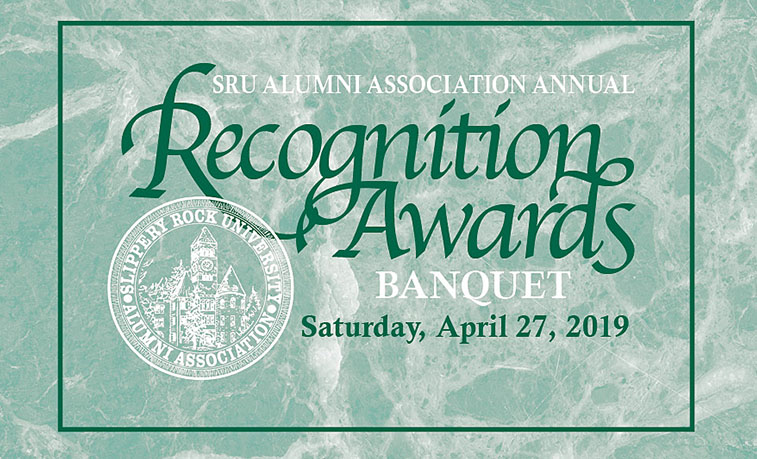 SLIPPERY ROCK, Pa. — The Slippery Rock University Alumni Association will honor four recent graduates at its Annual Awards and Recognition Banquet at 5 p.m., April 27 at the Russell Wright Alumni House. The association will also honor a number of students with awards and scholarships.

Marshall Tuten, a dual business administration in economics and professional Spanish major from Slippery Rock, and Dallas Kline, a sport management major from Spring Grove, will be awarded the Outstanding Senior Man and Senior Woman Awards during the ceremony.

Recent alumni being recognized are:

The awards were created in 2005 by the SRU Alumni Association to recognize alumni that have demonstrated professional and personal accomplishments. Alumni, faculty and staff can nominate candidates for the awards.

Those nominated for the honor must be a graduate of SRU with a bachelor's, master's or doctorate degree, and who have graduated within 10 years of the award's presentation. 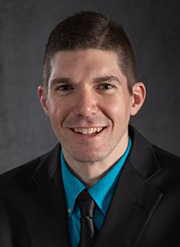 Outside of work, Beilstein is an avid cyclist who rides approximately 5,000 miles per year. He uses his love of cycling to make a difference for others as an annual participant and organizer of the American Diabetes Association's Tour de Cure bicycle fundraising event in Pittsburgh. His vast knowledge of local routes has proved invaluable in the creation of longer and safer routes for event participants.

Beilstein resides in Evans City with his wife, Rachel (Hunkele), '10, and daughter, Raelynn.

Evans is a program associate at the Richard King Mellon Foundation in Pittsburgh where she contributes to the organization's mission of building a competitive future and quality of life in southwestern Pennsylvania. 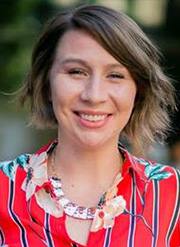 While an undergraduate student at SRU, Evans served as president of the Green and White Society, was an active member in the then-Honors Program and the Student Nonprofit Alliance, and worked as both a Pride Guide and a student assistant in the Center for Student Involvement and Leadership. She also led and participated in service-learning programs domestically and abroad and won a Rising Star Award for community service. Evans currently serves on the advisory council for the Philanthropy and Nonprofit Management Program at SRU.

Prior to joining the Mellon Foundation, she earned a master's degree in public policy from The University of Michigan before going onto serve as a Government Performance Lab Fellow at Harvard University's Kennedy School of Government.

Katchmarchi has dedicating his life to the education of future sport and recreation professionals; research to expand the field of drowning prevention and water safety; and service to national organizations that are focused on reducing drowning and aquatic injury. 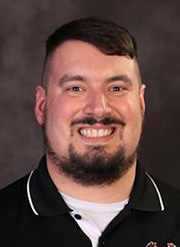 An assistant professor and the aquatics director in the Department of Kinesiology, Health and Sport Sciences at Indiana University of Pennsylvania, he also serves as the executive director and chief executive officer of the National Drowning Prevention Alliance, a 501(c)3 nonprofit focused on collaborative drowning prevention and water safety efforts.

At SRU, Kachmarchi served as a CPR and swim instructor and was the founder of the Aquatics and SCUBA Club at SRU.

He earned a doctoral degree in coaching and teaching studies at West Virginia University.

Michaux is the director of student leadership and involvement at Seton Hill University. At SHU, she helped to develop and implement a comprehensive leadership program for students. Michaux, an avid photographer, was recognized by JENESIS Magazine for her work with the Downtown Greensburg Project. In 2018, she was honored by NASPA's Center for Women during Women's History Month for her contributions to higher education. 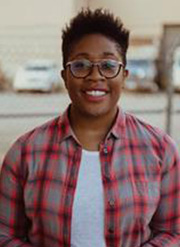 Michaux earned a bachelor of arts in English Literature and a master's degree in student affairs in higher education. While in graduate school she served as a graduate assistant for first year and transfer students and advised 20 first-generation, low income and Pell grant recipient students.

While a student she served as the Student Government Association speaker of the senate, a FYRST seminar peer leader, vice president of the graduate student association, master of ceremonies for Up 'til 2 for St. Jude and advised the Chosen Generation Gospel Choir. She was selected two consecutive years to represent SRU as part of the PASSHE annual advocacy day initiative.

Kline, currently serves as the president of the Slippery Rock Student Government Association, works as a Pride Guide for the Office of Undergraduate Admissions and as a student worker in the Sport Management Department. She has also served as the president of the Sport Management Alliance at SRU and the SRU chapter of Colleges Against Cancer. She has also captured a number of other accolades including the 2018 College of Business Student Leader of the Year, the 2017 Community Assistant of the Year Award and the 2016 Sport Management Underclassman of the Year Award. She has volunteered with the American Cancer Society, Special Olympics and the University's Office of Disability Services. She took part in a service-learning trip to Petersfield, Jamaica where she helped to renovate a community park. Kline plans to pursue a graduate degree in student affairs and higher education.

Tuten, has been in a variety of roles and capacities since he arrived at SRU, including tutor, orientation ambassador, peer mentor, fair trade learning coordinator and helping to reestablish the Zeta Alpha chapter of Theta Chi at the University. With the fraternity, Tuten serves as the vice president of health and safety and helped to formulate its Sacred Purpose initiative that addresses issues including suicide prevention, alcohol and drug abuse prevention, and sexual assault prevention and awareness. He has studied aboard in China, carrying out economic sustainability research; completed a sales, marketing and operations internship with Creminelli Fine Meats, an artisan meat company based in Salt Lake City, Utah; was named the 2018 Pennsylvania Association of Colleges and Employers Student of The Year; and named Outstanding Senior Economics Major by SRU's College of Business. Tuten plans to pursue a graduate degree in business or economics.