HARRISBURG, Pa. - Jeff Smith, a member of Slippery Rock University's council of trustees, has been elected to a two-year term as president of the Pennsylvania Association of Councils of Trustees.

"Trustees have a wide range of duties and responsibilities at their universities," said Smith. "From making recommendations for hiring and evaluating the university president, to approving the university's annual budget and academic programs, to setting room and board and other fees. We care deeply about the success of our universities, and the whole State System, and are committed to being good partners in designing its future." 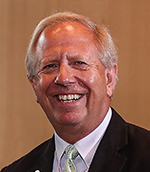 Smith has spent his entire professional career working for PPG Industries, now known as Vitro Flat Glass. Smith was elected to the Butler City council in January and will serve a four-year term ending January 2022. He has previously served as Butler's elected city treasurer and the executive director for the Butler County Council of Governments. He was recognized as the 2008 Pennsylvania Outstanding Borough Councilman and won the 2012 Governor's Award for Excellence in Local Government for his role in establishing COG Care, a program designed to provide low-cost health insurance to municipalities. He has served as an SRU trustee since 2013.

PACT comprises the members of the councils of trustees of the 14 universities in Pennsylvania's State System of Higher Education. The organization provides professional development opportunities for its members by holding workshops and conferences throughout the year. Each of the 14 State System universities is governed by an 11-member council of trustees. All 154 trustees are automatically members of PACT.

"The State System is on the verge of a renaissance," said Harold Shields, Edinboro University trustee and outgoing PACT president. "The entire system is undertaking an important redesign effort that will help it be less bureaucratic and more focused on student success." Shields also serves as vice chair of the board of governors, which is overseeing the System redesign process.

The System redesign effort is driven by three strategic priorities -- ensuring student success, leveraging university strengths and transforming governance -- and was a central topic of discussion at the recent PACT spring conference.