SRU will commission 13 Army ROTC cadets at May 10 ceremony 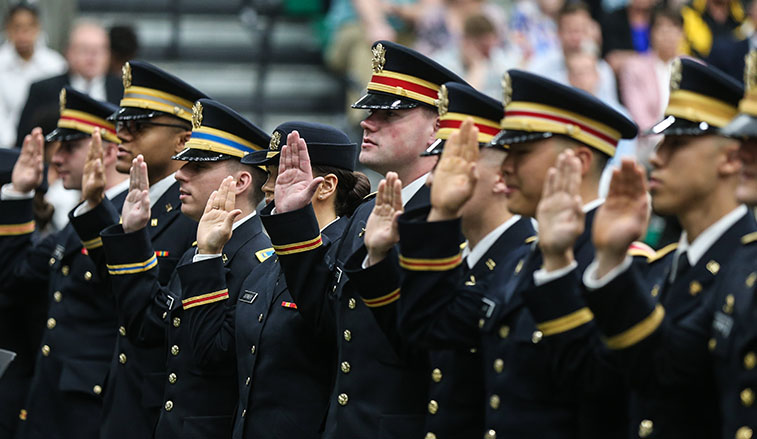 Thirteen cadets from the Slippery Rock University’s ROTC program will be sworn in as U.S. Army officers at a commissioning ceremony, May 10, at the Smith Student Center Ballroom.

This year's ceremony, at 5 p.m., May 10 in the Smith Student Center Ballroom, will see 13 cadets from SRU sworn in as officers, receive their new insignia of rank as second lieutenants and accept their first salute from a noncommissioned officer. The event is open to the public. 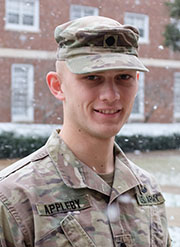 For cadets like Nicholas Appleby and Kathleen Seasock the ceremony is an opportunity for military siblings, spouses and parents to gather and show appreciation for one another's sacrifices and achievements.

"I see (the commissioning) as an accomplishment for all of us," said Appleby, a senior homeland security major from Eldred. "There will be shared emotions across the entire family because it's a culminating event for all of us, my dad and brother being military as well. It's going to be cool to celebrate together."

Appleby's father, retired Sgt. 1st Class Steven Appleby, and brother, Sgt. Alexander Appleby, will offer the first salute, a tradition between a non-commissioned officer who has influenced the newly commissioned officer. The NCO is called to post and salutes the new officer, who returns the gesture and also hands him or her a silver dollar through a handshake of appreciation.

"My dad never pushed me and he let me do my own thing, but he has had such as big influence on my decision with the military, just looking at his story and what he's done, he has inspired me," said Appleby, whose father's 27-year military career began in active-duty infantry with the 101st Airborne Division and included time in the Army Special Forces. "My brother has been there for me as my best friend growing up, so I wanted both of them to be a part of the ceremony to thank them for all they have done for me over the years."

Appleby's mother, Kristi Appleby, and grandmother, Elke Burrows, will take part as well by pinning the second lieutenant bars on his uniform, while Col. Joseph Richey, professor of military science and head of SRU's Army ROTC program, will read Appleby's oath, formally swearing him in as an officer.

Just as his father did for basic training in the 1970s, Appleby will report to Fort Benning, Georgia, June 2 to start Infantry Basic Officer Leader Course.

Seasock, a senior health science-public health major from Burgettstown, will also have military family members on hand. Her husband, Daniel Seasock, commissioned and graduated from SRU in 2017 with a degree in health science-public health, and has since been stationed in Fort Hood, Texas, with the 2nd Battalion, 82nd Field Artillery Regiment. Kathleen Seasock didn't just marry into a military family, she was raised in one too, and her parents currently live in Fort Bragg, North Carolina. 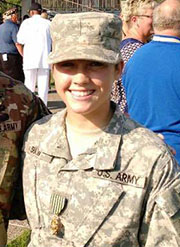 "With me being fourth generation military, this makes (the ceremony) extra meaningful," Seasock said. "My family are all very far away, so it'll be nice to have everyone in the same place."

Seasock will report to Basic Officer Leader Course in Fort Sill, Oklahoma, in June before she can join her husband's unit, which will be on deployment in Korea, later this year.

"It's been a long-time coming and doing long distance for a marriage has been hard, but this is what we've been waiting for," Seasock said. "(Daniel's) still going to be deployed, but it's a step closer to us actually being together."

The commissioning ceremony is a momentous occasion for the entire ROTC program, including motivation for underclassmen who are working toward their goals.

"This is our final transition from cadet to officer to start our career," Appleby said. "It's one of the biggest achievements in a soldier's life. Especially for the junior cadets, it's nice to see what the hard work is going to culminate into and that (what we're) doing all the years of ROTC will pay off in the end and you get to be an officer and serve your country."

The following SRU cadets will be commissioned at the May 10 ceremony with their branch assignments:

Four cadets from SRU earned National Distinguished Military Graduate recognition for their ranking on the Army Order of Merit List. Of the more than 5,000 cadets ranked nationally, Appleby and Miller ranked in the top 10 percent, and Seasock and Dooley ranked in the top 20 percent. The rankings determine preference given to cadets for their branch duty assignments.