SRU readies for a trio of commencement ceremonies 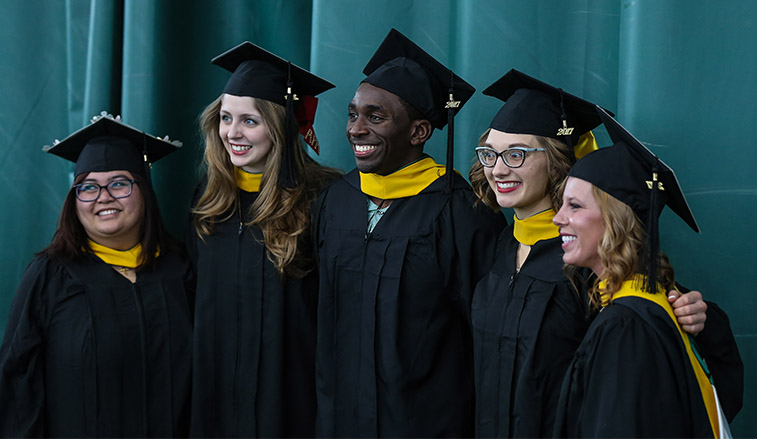 SLIPPERY ROCK, Pa. - Slippery Rock University will confer a record number of degrees during a trio of commencement ceremonies May 11-12 at Morrow Field House as more than 1,700 undergraduate and graduate degrees will be awarded. Nearly 1,400 of the degrees awarded will be baccalaureate degrees, with 276 master's candidates expected to cross the stage including those from SRU's inaugural Physician Assistants program. Fifty-three doctoral candidates will be hooded.

Overflow seating (no ticket required) will be available in the Alumni House, Advanced Technology and Science Hall Auditorium and the Smith Student Center Theatre. The ceremony will also be streamed live on www.sru.edu.

Alan Levy, professor of history, will serve as grand marshal and will open and close the ceremonies.

SRU Interim President Philip Way will provide remarks and introductions. William McCarrier, chair of the University's council of trustees will bring greetings from the council at all three ceremonies.

Lt. Col. Joseph Richey, professor of military science and head of SRU's Army ROTC program will confer the oath of office to 18 graduating ROTC cadets, inducting them into the U.S. Army as second lieutenants.

Since its inception, the SRU Army ROTC program has commissioned 367 officers.

Way, who assumed the role of interim president at SRU in July 2017, will serve as the speaker at each ceremony.

Don Huddart, a 1987 SRU graduate and president of the SRU Alumni Association, will induct the graduates into the association.

The SRU Brass will provide music for the ceremony.

The SRU Men's Quartet will sing the "Star-Spangled Banner," while the SRU Student Quartet will lead the singing of the "SRU Alma Mater."

A reception for graduate students and their guests will immediately follow the May 11 ceremony in the GrassTex area of the field house.

A reception for all undergraduate students and their guests will take place from 11:30 a.m. to 1:30 p.m., May 12 in the Smith Student Center Ballroom.

Additional information about guest and special needs seating, transportation, parking and lodging is available at http://www.sru.edu/events/commencement or by phoning 724.738.2849.