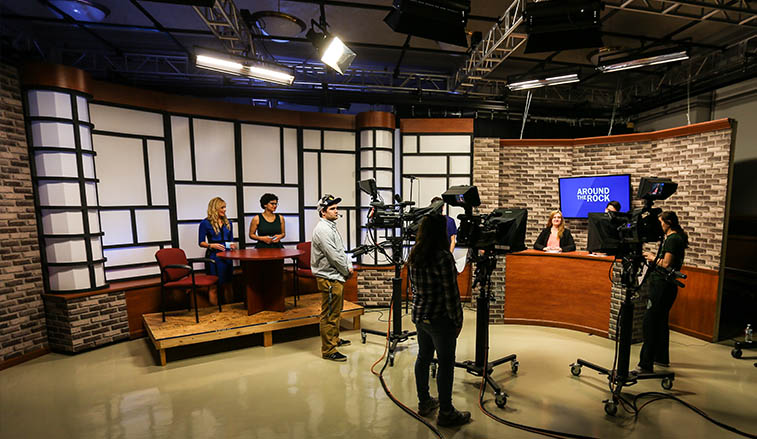 Slippery Rock University students conduct a show demonstration at a recent open house event at the Maltby Converged Media Center, which now features a new studio set thanks to a $10,000 grant and a collaboration with the SRU Theatre Department.

SLIPPERY ROCK, Pa. - The convergence of Slippery Rock University student media isn't set — that is a gradual, behind-the-scenes process to combine the working environments for print, online and video media — but the addition of a new television studio set in the Maltby Converged Media Center is a visible step in the right direction.

Thanks to a collaboration between faculty from the Communication and Theatre departments, as well as a one-time University grant of $10,000, the studio has a contemporary set that will provide the backdrop to many shows produced by Communication Department classes and WSRU-TV, the student-run television broadcast and video production company. 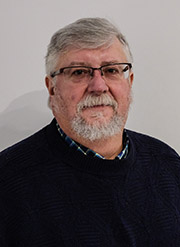 Brittany Fleming, assistant professor of communication and faculty adviser for WSRU-TV and The Rocket, the independent, student-run news at SRU, said the new set is already instilling a new sense of confidence in the student broadcasters with whom she works.

"The students are becoming such strong storytellers and having something professional behind them that looks good and they can use in their portfolios ... it's a game-changer," Fleming said.

The new set stands 10-feet high and includes three modular pieces that can be moved around the studio on casters for different segments of shows, such as WSRU-TV's "SGA Update," "Happy Hour" and "Around the Rock."

When hinged together the set is 40-feet wide, consisting of wood paneling painted to appear like three-dimensional brick. There are also black rectangles in front of a white plastic backdrop, which, when lit by five LED lights, accent the backdrop with different colors. Artwork, such as photos of campus, can be placed inside the rectangles. Because the set is modular, windows with a view of Campus Drive that sit behind the set can still be accessed as a backdrop.

Gordon Phetteplace, associate professor of theatre, came up with the design, which was inspired by the work of Piet Mondrian, an early 20th century artist who popularized the use of simple geometric elements.

"The set is functional in that the four boxes are intentionally designed to plug images into them, but it's also aesthetically pleasing and harkens to Mondrian," said Phetteplace, who mostly designs sets for the theater stage but has previously designed news sets when he worked as a professional designer. "It's all very similar as a designer for the theater; I have to communicate the message of the play in a visual form and create an environment that's conducive to the action of that play. Here, it's the same thing. I have to create an environment that is conducive to what they need to do from a television news set."

Phetteplace worked with Fleming to achieve the vision that she wanted to project, which according to Phetteplace, is "much more contemporary and modern than what you are seeing in typical news sets."

The collaboration was crucial for Fleming because outsourcing the design and production of a set would have exceeded the $10,000 budget. After they agreed on a design in January, Phetteplace had the set built by his son, Theron, who operates his own residential construction business. The set was constructed at Phetteplace's shop; painted by Deb Cohen, a retired SRU modern languages and cultures professor who is pursuing a bachelor's degree in theatre at SRU; and installed in the Maltby Center in March.

"This is one of the most impressive (college) television sets around," Fleming said. "The students are no longer trying to put on a newscast in the middle of a resource library; it's professional and everything looks clean and crisp. This is just the very beginning of what will end up becoming the Rock Media Convergence Center."