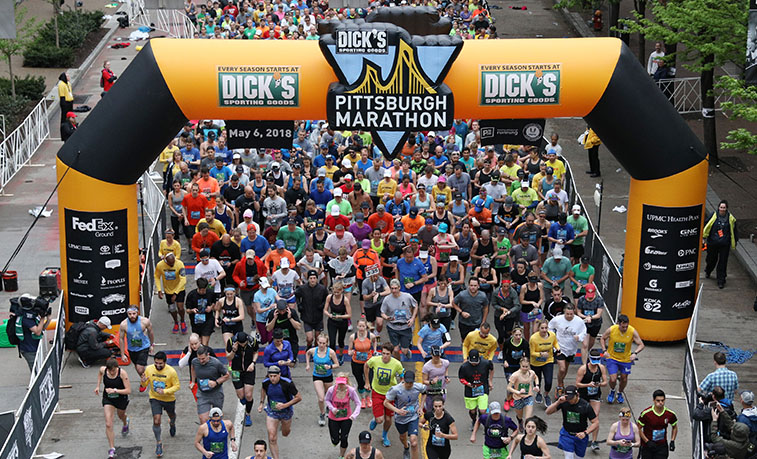 A group representing Slippery Rock University will run in the Pittsburgh Marathon, May 5, as part of the event’s “Campus Challenge.”

SLIPPERY ROCK, Pa. — There will be plenty of cheers for Slippery Rock University in Pittsburgh, May 5, when a group representing SRU takes to the streets as part of more than 40,000 runners in the Dick's Sporting Goods Pittsburgh Marathon.

"It's awesome because you'll always hear someone yell 'Go Rock!' when you wear something with SRU on it," said Randy Nichols, professor of physical and health education, who last ran in the event four years ago and will be a participant in this year's half marathon. "There will be a lot of people cheering you on and that gives you a boost along the way when you need it."

Nichols is lacing up for the 13.1-mile race again because of the efforts of Erin Fisher, a senior health and physical education major from Brunswick, Maryland, who helped get 26 runners representing SRU to sign up as part of the Pittsburgh Marathon's "Campus Challenge." Participants in the Campus Challenge received a discounted registration fee and a shirt for selecting their college or university on the race registration form.

Fisher, SRU's Campus Challenge Ambassador, came up with an idea to participate in the Challenge as a way to gather her classmates for a memorable activity to conclude their time at the University. 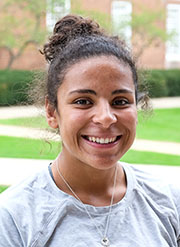 "It's the last weekend before graduation so I told my classmates, 'Let's go! Let's do it! This can be one of the last things we do together before we go our separate ways,'" said Fisher, a veteran of nearly a dozen half marathons and two full marathons. "Running is a good thing for health and physical education teachers to encourage others (to do) and (allows us to) be a role model for what we're teaching and promoting. This setting is good because it provides a group setting where we can support and encourage one another."

Rhyanne Hartwig, a senior health and physical education major from Grove City, was Fisher's first convert. Hartwig has participated in powerlifting, rugby, cheerleading and as a thrower in track and field, but doesn't consider herself a runner, at least not before Fisher convinced her to sign up for her first half marathon.

"(Erin) is very persuasive," said Hartwig, who acknowledged it's more fun and motivating to run with friends. "She tells us that anyone can do a half marathon, just not very fast or without being sore afterward. I'm still very nervous because I haven't run 13 miles yet (in my training), I just want to finish."

"A lot of the people I got to sign up have never run one (half-marathon) before and they are starting to get nervous, but I tell them even if you are the last person you are still doing 13 more miles than someone sitting on the couch," said Fisher, who plans to have everyone wear SRU gear for the race. "It's cool to represent our school and people might say, 'Wow, there are so many Slippery Rock University people out here.'"

Nichols is a veteran of rousing the spectators lining the marathon course, having run a race in Baltimore while wearing Pittsburgh Steelers gear, but the opportunity to represent SRU is not the only reason he signed up for the Pittsburgh Marathon.

"I saw Erin's leadership in trying to get her peers motivated and seeing that made me think this is something I should engage in as well," said Nichols, who is a member of the President's Commission on Wellness that is supporting the initiative. "I wanted to be a role model for our students in terms of being healthy, well and engaging. A focus of our program is being involved in one's community, so getting on board with this event makes sense. There's tons of energy at the Pittsburgh Marathon with a lot of people engaged in the same mission of being healthy and accomplishing a goal."