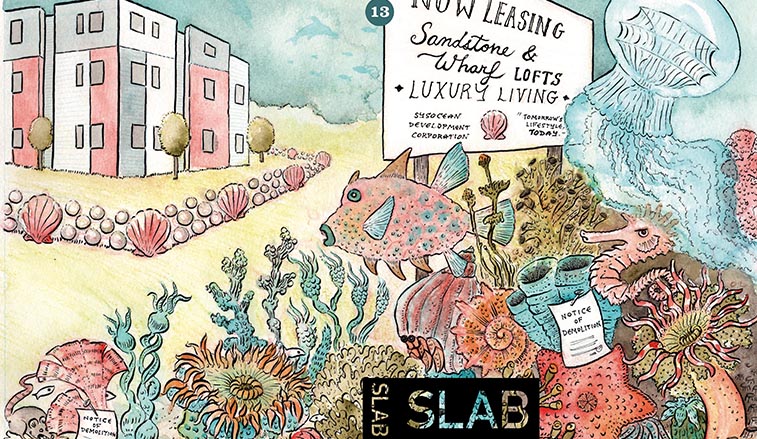 SLIPPERY ROCK, Pa. - SLAB, Slippery Rock University's literary magazine, is one of the few in the country entirely edited and run by undergraduate students.

"I knew about SLAB (Sound and Literary Art Book) before I started here because it has a national presence in the world of literary magazines," said Rochelle Hurt, assistant professor of English and SLAB co-adviser, who is in her first year on the SRU faculty after completing her doctorate in English at the University of Cincinnati last year. "I didn't know much about SRU but when I interviewed here I realized this is where SLAB was and that's exciting because that kind of a journal is usually edited by graduate students. To have a national journal edited by undergrads is really special."

A student organization consisting of 30 undergraduates produces SLAB each year. The content includes the genres of poetry, fiction and creative nonfiction, submitted by emerging and established writers from across the country. Recognized in 2012 with the National Program Directors' Prize for Undergraduate Literary Magazines by the Association of Writers and Writing Programs, SLAB has a reputation that helps students gain editing experience, attend national conferences and work alongside famous authors. 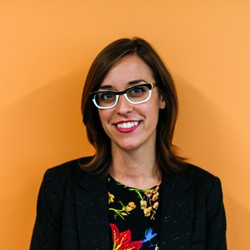 "The students get to professionalize their studies," said Mark O'Connor, associate professor of English and SLAB co-adviser who helped build the publication since its inception in 2006. "They get a hands-on, physical thing that they made and the experience places them in the ranks of other professionals. Our students are playing with the heavy hitters."

The most recent edition of SLAB, the 270-page Issue 13 released early last month, features 55 pieces from writers such as Eric Pankey, the Heritage Chair in Writing at George Mason University and the author of 12 poetry collections. Pankey's unsolicited submission of the poem "To Formulate a Definition" is an example of how SLAB is recognized by the literary community as a destination for their work.

"(SLAB) gives the students a sense of how big the writing world is," Hurt said. "As a student, it's easy not to think beyond the classroom experience and how many other writers are out there. But they get to be a part of a big writing community."

From editing and desktop design to planning a release party and attending a national writing conference, students on the SLAB staff obtain experience that prepares them for their careers and post-graduate work. They evaluate more than 300 submissions from August to December before selecting, proofreading and publishing the work for release in early April.

Prior to O'Connor's arrival at SRU, the University had a literary magazine called Ginger Hill that published students' work, mostly from English majors. But only people at the University knew about it.

"What's more valuable is giving the students a chance to work on a literary magazine that goes all over the country and publishes both famous writers and those just starting out," O'Connor said. "(As a student) you can say, 'Hey, I made this amazing thing and I was the fiction editor or the poetry editor or the nonfiction editor.'"

SRU-based writers also get the opportunity to be featured in the pages of the magazine as the winners of the Boggs Senior Creative Writing Prize has his or her work published in the magazine each year. The prize, named for William Boggs, SRU English professor, is awarded to a senior creative writing major whose submitted literary work is evaluated by an independent judge.

Amanda Salvia, a 2017 graduate, had her essay about her grandmother's struggle with dementia, "(Nonna, 2016)," published in the most recent issue, while Danielle McDermott, a senior from Slippery Rock who is the current managing editor of SLAB, will have her work, a creative nonfiction piece titled "Familial Paper Trail," published in next year's issue.

"It's an amazing honor to not only be part of the SLAB staff but now part of the book as a contributor," said McDermott, who will pursue a master's in English and media studies at Rutgers University-Camden next year, with a teaching assistantship covering her tuition.

"(Working on SLAB) has been a growing experience, taking on more opportunities and learning about publishing and the behind-the-scenes work. It's helped me as a leader but also being able to interact with people on a professional and personal basis as well," she said.

In addition to Salvia's piece, this year's issue included the findings from an oral history project conducted by Anna Swartwout, a senior English literature major from Renfrew, who received a $725 Summer Undergraduate Research Experience award last year to research the history of homecoming queens at SRU called "Queens of Slippery Rock."

While gaining confidence and professionalizing their studies are both ways that SRU students benefit from working on SLAB, there's something else that makes their experience rare.

"They also have a lot fun and it gives them this close club to be a part of," Hurt said. "It's fun and it's an important professionalization activity; those usually don't come together."